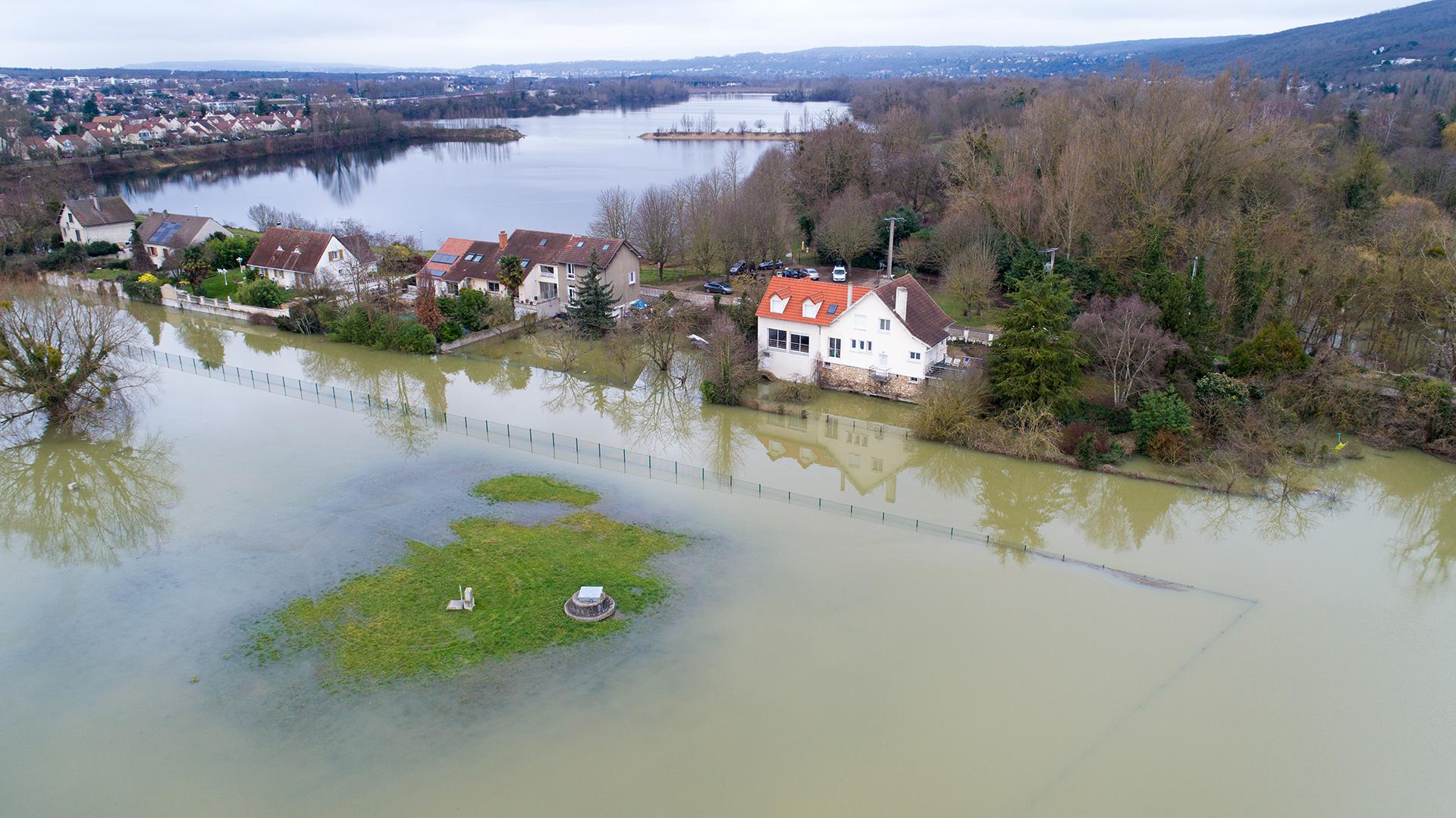 Share
The mission of the Seine Grands Lacs (SGL) Public Regional Basin Authority (EPTB) is to ensure flood control and low-water support throughout the Seine basin, upstream of Paris. As part of this mission, BRGM has been providing supportsince 2005 and has developed tools to help manage low-water levels. 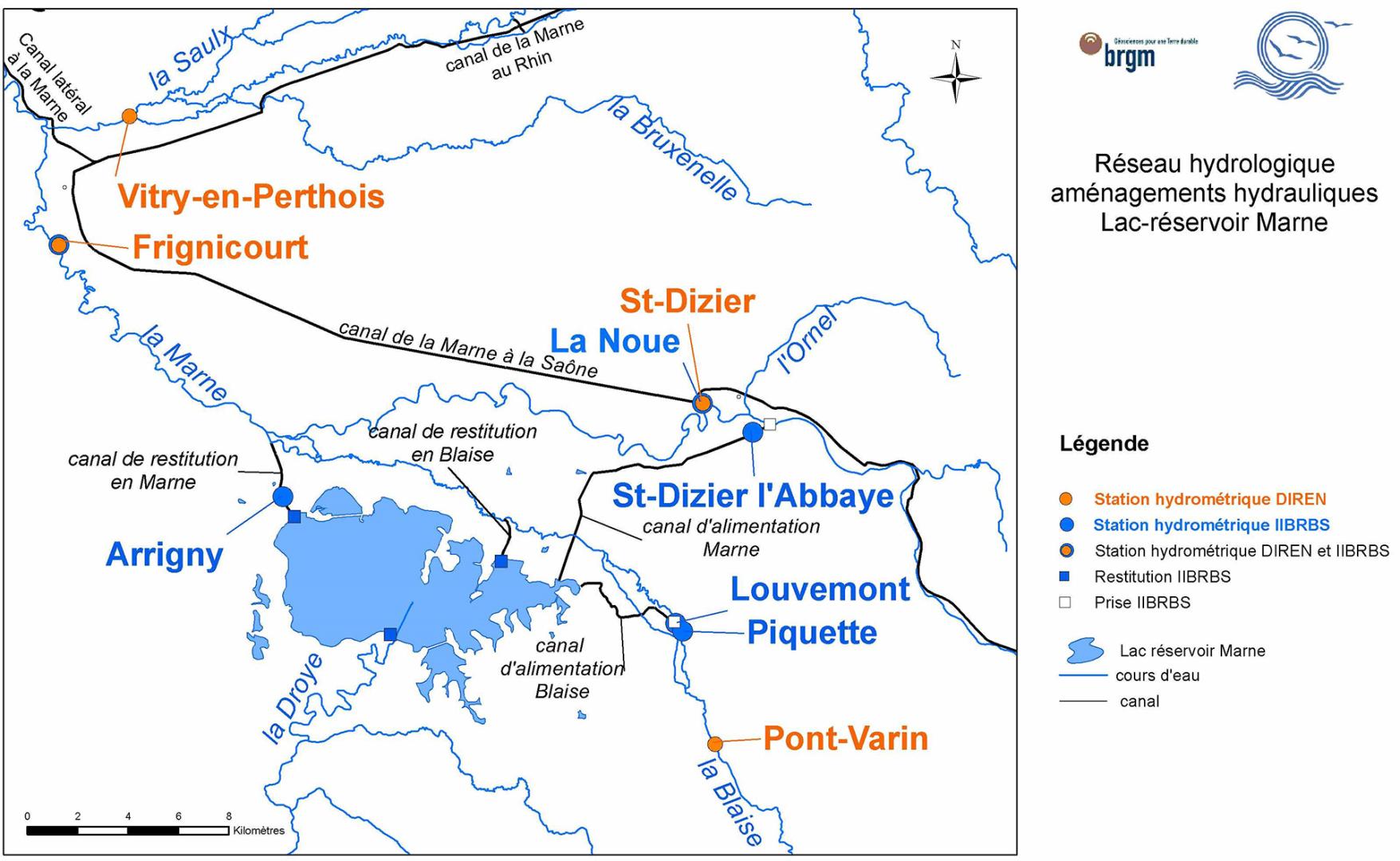 Map of the hydrological and hydraulic network of the Marne reservoir lake.

The tools developed by BRGM since 2005 to support the SGL EPTB , which in particular provides low-water support in the Seine basin, upstream of Paris, issue a statistical forecast (i.e. a predetermination) of flows for a given number of months in the future (duration of the forecast) for a given hydrological situation (date of issue of the forecast). These tools, global and semi-global models, have been improved and recalibrated over time.

The EROS Marne semi-global model, in particular, was reconfigured to daily time steps in 2012. In order to better fulfil its mission of supporting low water levels and even flood forecasting, the  Seine-Grands-Lacs EPTB asked BRGM in 2017 to check the contribution of the underground compartment in the EROS Marne model.

The new EROS Marne model, covering 11 sub-basins, includes three additional hydrometric stations on the Marne compared with the old version. It integrates recent changes in the calculation code and includes the underground component. It provides calculations that match observed flows and piezometric levels in a satisfactory manner, even though the adjustment coefficients on the piezometric levels are not quite as good as those obtained on the flows, in particular in the karstic sectors (few long series piezometers available, atypical behaviour with a very local representativeness). The values of the simulated minimum flows were improved by integrating piezometers into the model, particularly for basins with minimum observed flows greater than 10 m3/s. The water balance is also more significant since the hydrosystem is now taken into account as a whole. A higher contribution of groundwater can thus be noted for certain basins (the Marne at Frignicourt in particular). The new EROS Marne model is therefore more robust and more suitable for simulating low water levels.

This model was then tested in forecast mode (emission of statistical forecasts of flow changes for the coming months at each hydrometric station modelled). In order to identify and validate the quality of the calibration for the forecasts, hindcast scenarios, selected to represent certain particularly severe low water levels, were simulated. Thanks to the results, the calibration of the model as well as its robustness, were validated.

Forecasts were thus made, with and without replenishment by the dams, for three hydrometric stations: the Marne at Chamouilley, Châlons-sur-Marne and Gournay. Once transmitted to the Seine-Grands-Lacs EPTB before the low water period of 2018, they enabled it to analyse the low water situation and to propose a management adjustment during the Technical Committee for the Coordination of Studies and Works on the Grands Lacs de Seine. Concomitantly, a posteriori verification of these forecasts has highlighted their reliability.

Staff at the Seine-Grands-Lacs EPTB  were then trained to use the model in October 2018. At the end of this training course, the new version of the EROS software, together with its user manual, data and pre-processing files, were handed over to the Seine-Grands-Lacs EPTB, which can now directly carry out low-water forecasts and then adapt the reservoir lake's discharge as best as possible.

The good results of this new model have encouraged the SGL EPTB to extend its coverage in the near future to the entire Seine catchment area upstream from Paris.