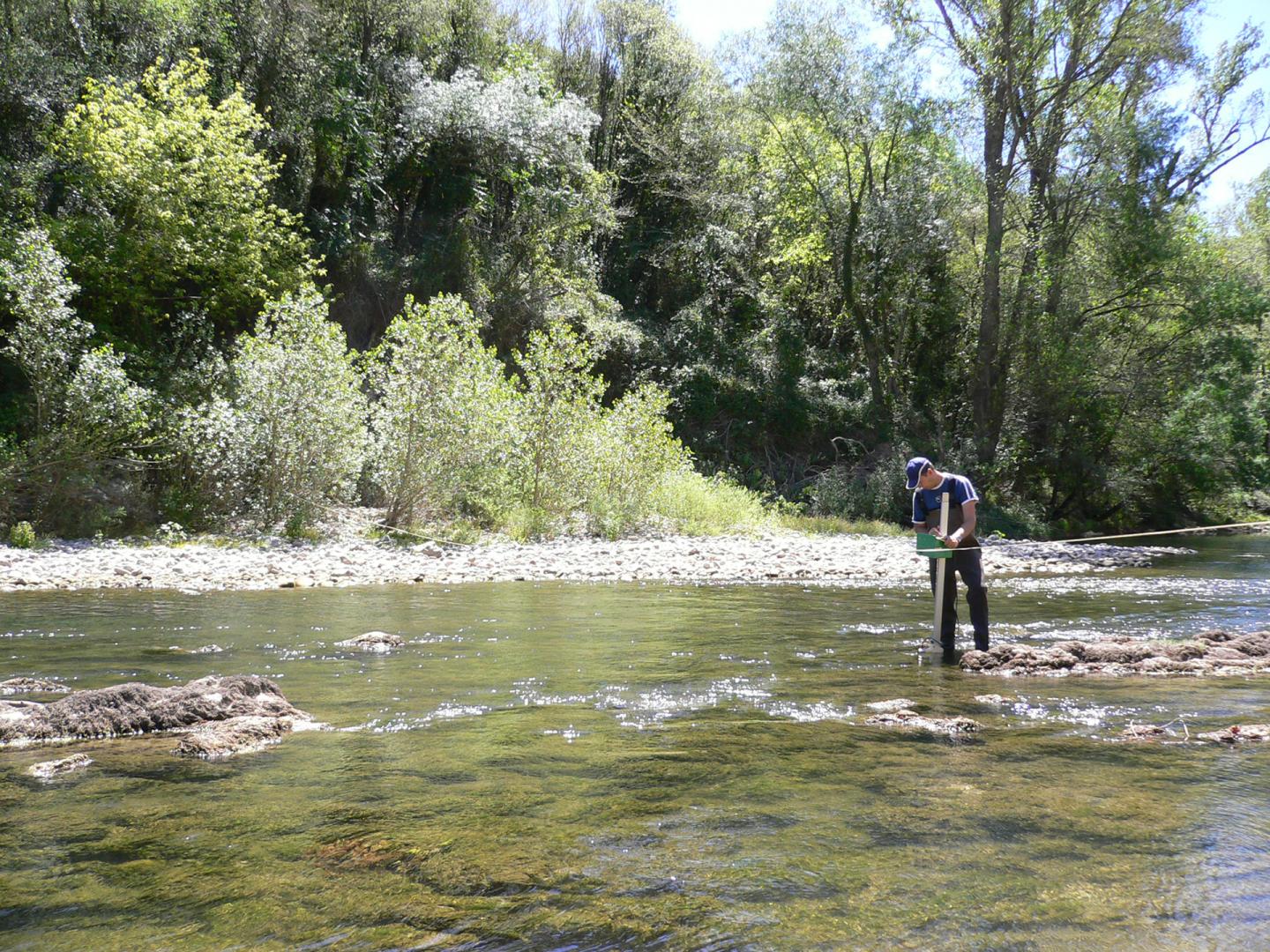 Share
Where do the thermal waters of Balaruc-les-Bains come from? What is the source of the drinking water that supplies the city of Sète? Why are there changes in the flow of the submarine Vise spring? The goal of the Dem'Eaux Thau research project (2017-2022) was to improve our understanding of the structure and functioning of a complex karst hydrosystem in the Thau Basin area, west of Montpellier. It has enabled the development of groundwater management tools at different spatial and temporal scales.

View (from left to right) of the Balaruc peninsula, the Etang de Thau, Sète and the Mediterranean (Mont Saint Clair, Sète, 2020).

The underground water resources of the karst limestone formations of the Montpellier western fold are of major interest for the region, for the supply of drinking water (town of Sète, Syndicat Intercommunal d'Aduction en Eau Potable Balaruc-Frontignan, Syndicat Intercommunal d'Adduction d'Eau des communes du Bas Languedoc), but also for economic development, in particular shellfish farming/fishing in the lagoon, as well as for the spa on the Balaruc-les-Bains peninsula (the leading spa in France with more than 50,000 guests coming to "take the waters" in 2019), and irrigation. The site is located at the convergence of underground waters coming from various surface and deep reservoirs: cold karst waters of the Causses d'Aumelas and the Gardiole, waters of marine origin (lagoon and sea) and hot and mineralized thermal waters. These different reservoirs interact with each other through complex processes whose determinants are not all understood.

This karst aquifer is subject to temporary brackish water intrusion phenomena (called “inversac”) via the submarine Vise spring in the Thau Lagoon, less than 200 m west of the Balaruc-les-Bains peninsula. Since the end of the 1960s, seven inversac phenomena have been detected. During this phenomenon, which can last several months (about 6 months in 2010 and 2014, and nearly 18 months in 2020-2022), the Vise spring, instead of supplying fresh water for the aquatic life of the Thau lagoon, absorbs brackish water from it, leading to progressive and recurrent salinisation of the aquifer. This phenomenon led, among other consequences, to the abandoning (in 2014) of the Cauvy spring in Balaruc-les-Bains as a supply of drinking water.

This scientific study was conducted by a multidisciplinary team in order to characterise the geology, geomorphology, hydrodynamics, hydrogeology and geochemistry of the Thau hydrosystem. The researchers then pooled and discussed their different observations to build a comprehensive conceptual model of the functioning and dynamics of the aquifer. This was achieved in various ways by means of geophysical imagery, drilling a borehole in Sète and constructing a multi-borehole platform in Balaruc-les-Bains, including one shaft nearly 780 m deep, designing and installing custom-made equipment for the Vise spring, and unprecedented sampling campaigns (180 samples, more than 3,000 analyses).

Focus on some of the results

The integration of all the historical geological data with the new data acquired by the project (stratigraphic, lithological and structural) and geophysical data (gravimetry, seismic reflection, passive seismic observations) made it possible to build a 3D geological model of the area covered by the Dem'Eaux Thau project, using the Geomodeller tool. 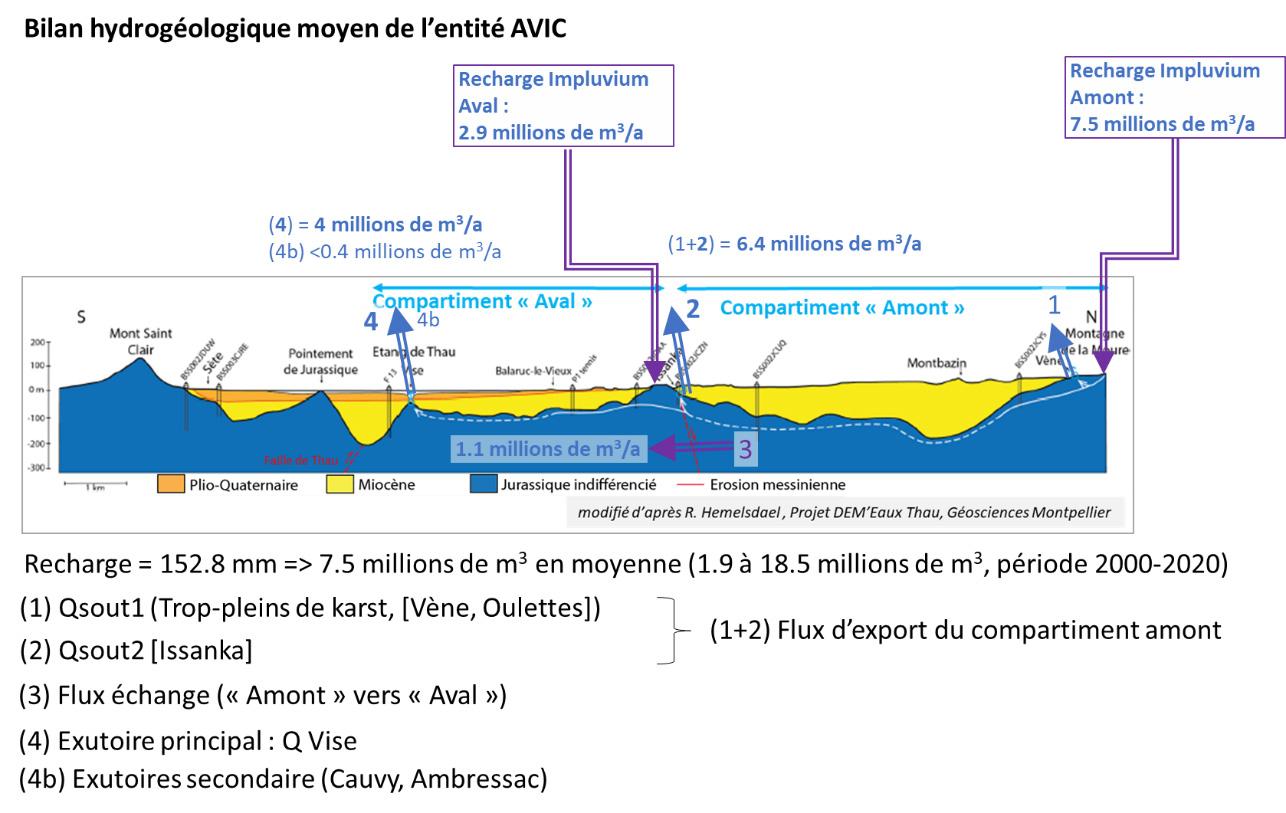 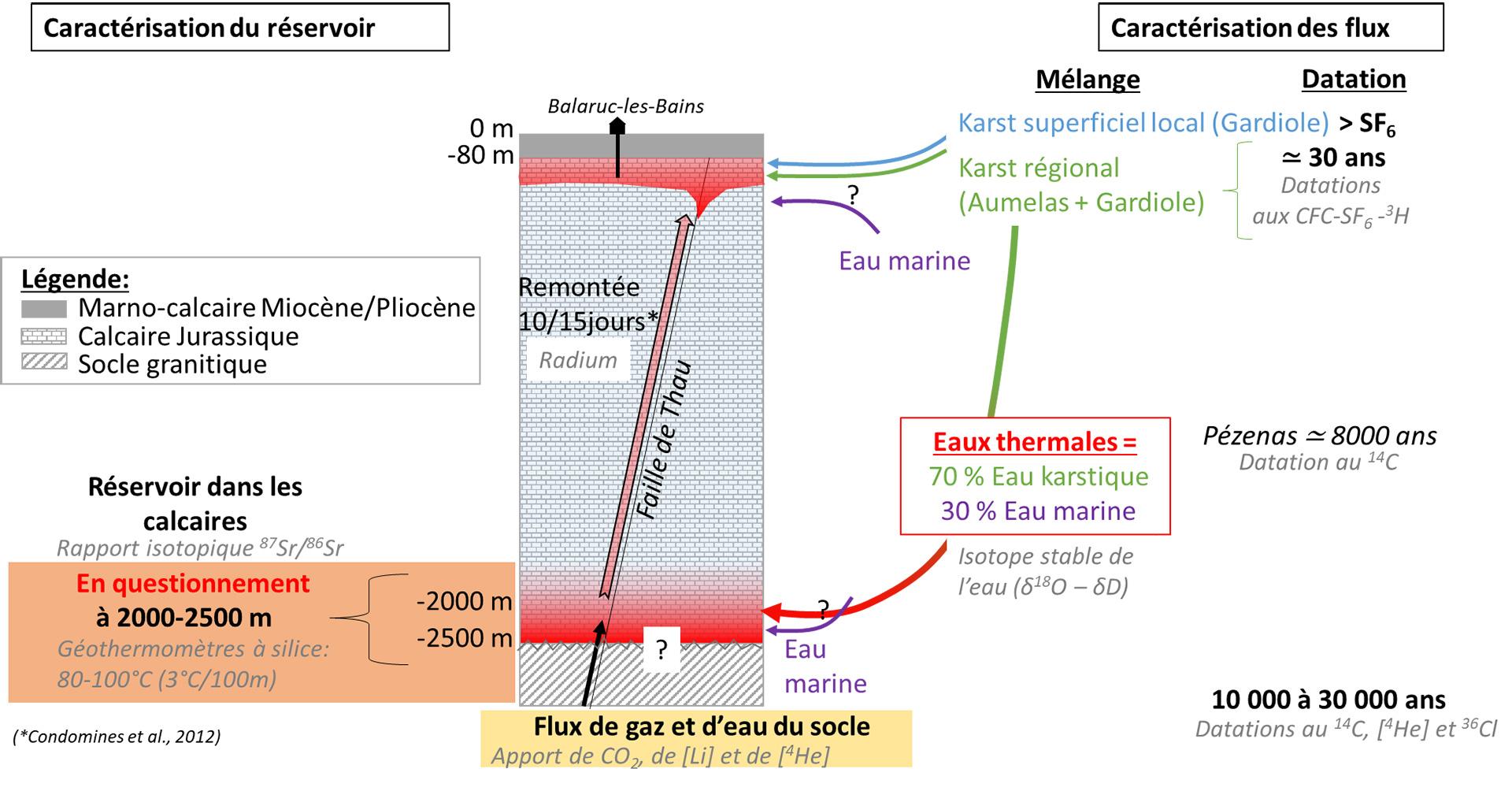 The geochemical analyses provided new insights into water circulation and mixing within Jurassic reservoirs and have led to a better understanding of water-rock interactions. The chemical, isotopic and dating information acquired during the project on the sampled sources and boreholes contributed to the revision of the conceptual scheme of the way the thermal reservoir functions. 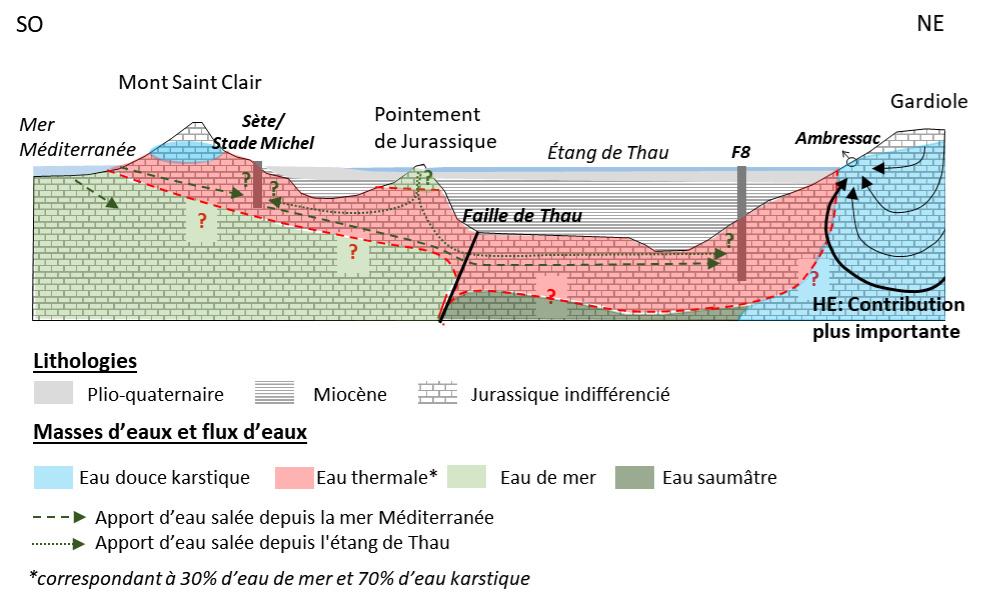 A diagram illustrating the water supply to boreholes F8 and Sète/Stade Michel. The thermal waters (30% sea water, 70% karst water) rise from the thermal reservoir through the Thau fault. An additional contribution of salt water (+16% for F8 and +18% for Sète/Stade Michel), represented by the green arrows, comes from the Mediterranean and/or the leading edge of the Jurassic formation. 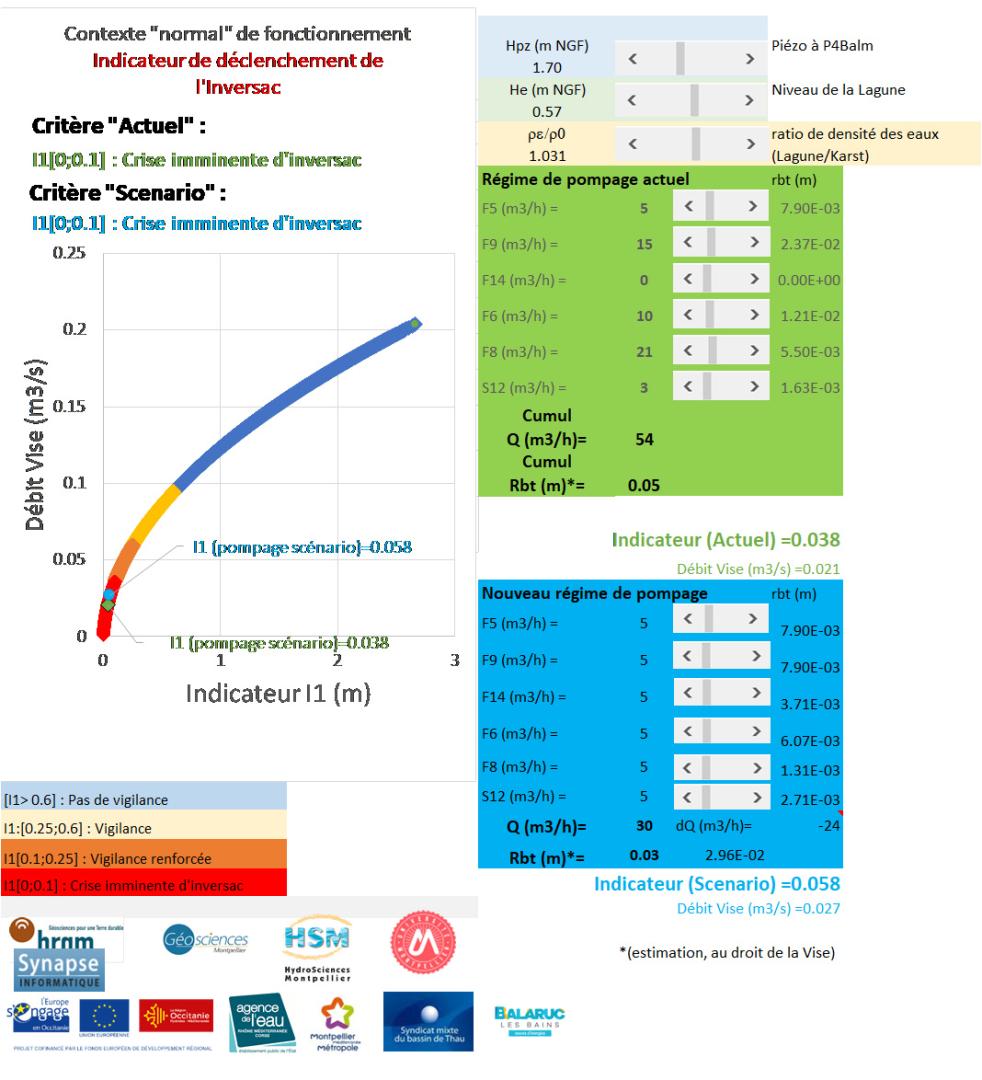 The understanding and modelling of the inversac phenomenon has enabled the development of a prototype tool to assess the risk of this phenomenon being triggered, based on various variables recorded on the Balaruc-les-Bains peninsula.

The results of the various tasks carried out by the project partners are summarised in the form of reports or publications.

The list below will be updated with links to the documents as they are produced.

The project has a budget of 5.3 million euros, 42% of which is financed by the Ministry of Higher Education and Research and the Occitania Region (as part of the 2015-2020 State-Region Plan Contract), 11% by the European ERDF fund, 17% by the Rhône-Méditerranée-Corse Water Agency, 4% by Montpellier Méditerranée Métropole, 2% by Balaruc-les-Bains and 1% by the Syndicat Mixte du Bassin de Thau. The remaining 23% of the project's funding comes from contributions made by most of the partners.

Logos of the funders and partners of the Dem'Eaux Thau project.