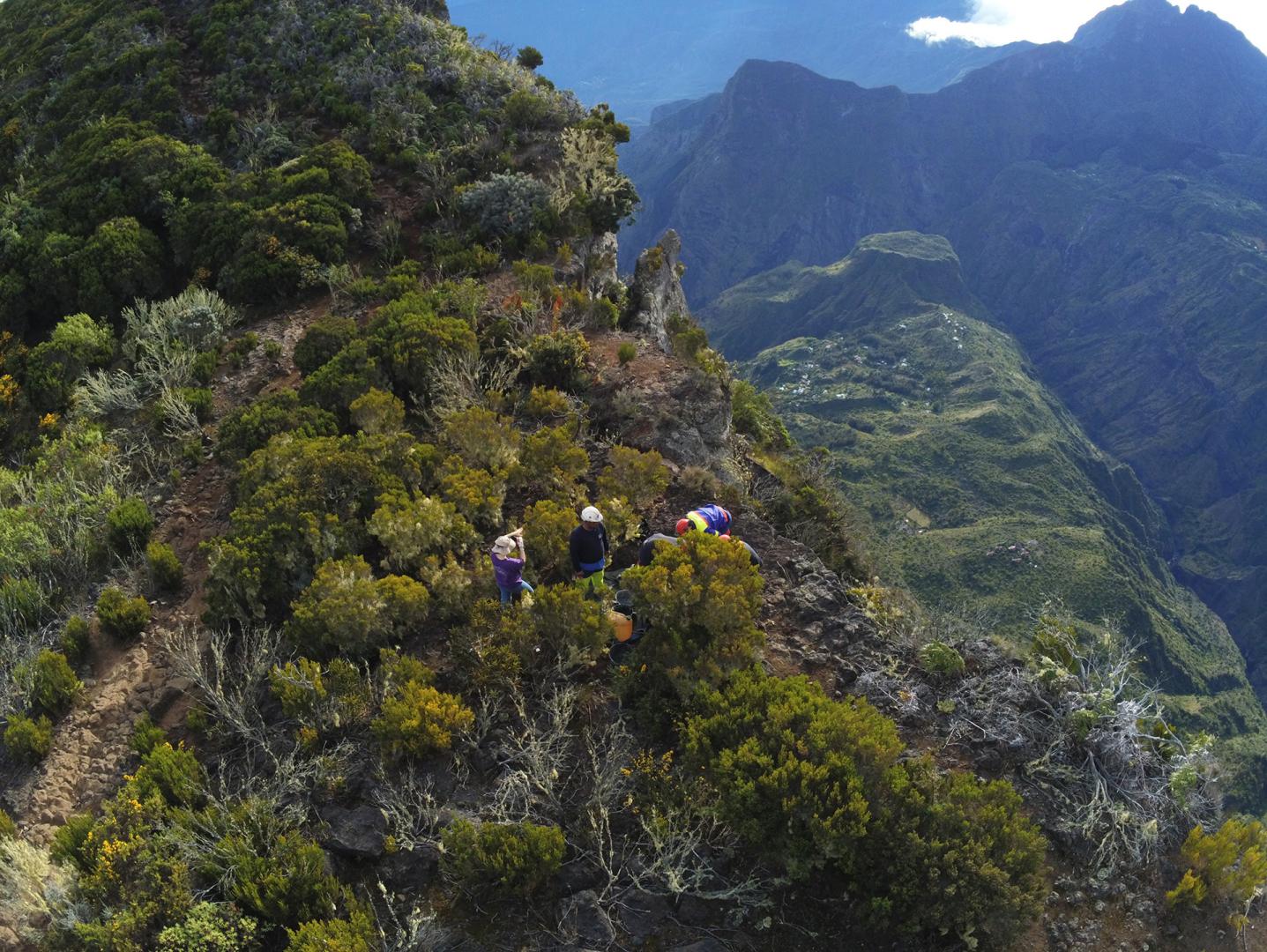 On Reunion Island, a muon telescope to monitor precursor signs of collapse

Share
The muons, cosmic particles, will enable BRGM scientists to gain a better understanding of the Maïdo rampart on La Réunion. This 1000-metre-high wall is cracking and in danger of collapsing.

On Reunion Island, muons, cosmic particles, will enable scientists to gain a better understanding of the Maïdo rampart, a 1000-metre-high vertical cliff that is cracking. But to what extent? This is what the telescope will enable us to determine. Like an X-ray, it will capture the differences in density within the cliff and thus characterise the shape, volume and depth of the cracks.

For the first time, a muon telescope is being deployed on Réunion Island. It was airlifted to the heart of the Cirque de Mafate. Set up in a shelter, it will remain on site for 6 months. Its mission is to visualize the interior of Maïdo, a 1,000m-high rampart, to monitor and predict the risk of landslide. This rampart, like many on Réunion, is subject to decompression phenomena, which explains the appearance of cracks below the crest, a few meters from the edge, or even a few dozen meters, and at Maïdo, along a stretch of 130m, almost right up to the access road. How deep are they? What are the cross-section volumes? Are they close to breaking? The largest cracks are at the edge of the rampart. In November 2020, a fire apparently widened some of the cracks. BRGM Réunion monitors the evolution of these cracks. The risk is primarily to anyone in the area. The view makes it a popular tourist site. There are also major issues below, where there is a village with several dozen inhabitants: Roche Plate. We know it will definitely give way, we need to determine when and predict probability. Meanwhile, 1,000m below... The muon telescope is pointed at the cracks at the top of the rampart. Its purpose is to record the muons traversing the rampart. But what are muons? Particles from space are constantly striking the Earth. They disintegrate into showers of elementary particles, electrons, positrons, neutrons and, smallest of all, muons. The particles we look at are produced in the air, high up in the atmosphere, on the other side of the Maïdo here. They cross the Maïdo and reach this device. The telescope records the trajectories of the millions of muons crossing the rampart. Exactly the same thing happens when you have an X-ray at the hospital. We obtain an image highlighting the contrast between dense and less dense zones. BRGM wants to ascertain the shape and depth of cracks in the rampart so as to assess the volume of rock likely to break away, making it possible to model the risk to inhabitants and infrastructures. This technology has already been used to view large archeological objects, like the Pyramid of Giza, as well as large geological objects, like volcanoes. But it's the first time the telescope has been used to image the density on such an immense cliff. For 6 months, the telescope will also record any evolution of the cracks to further improve understanding of the risk.

The Maïdo "rampart" is a very high cliff (nearly 1000 metres) with a slope varying between 50 and 60 degrees, which delimits the western edge of the Mafate cirque in La Réunion. The site is characterised by the presence of potentially unstable rock compartments: the écailles de rempart (rampart scales). Open in some places by more than a metre and with a known depth that can reach more than 10 metres, these cracks have been observed up to more than 100 metres from the edge of the Maïdo rampart.

Assess the risk of collapses occurring.

Rampart collapse events in Reunion Island pose a threat to people and property both below the rampart and at the top of the rampart, with a possible sudden retreat of several hundred metres.

In 2019, to assess the risk of potentially major rampart collapses, BRGM installed three seismic stations on the Maïdo site.

BRGM is now monitoring the evolution of the cracks in the rampart by capturing muons passing through it. The telescope is aimed at the cracks at the top of the wall. The objective is to determine as precisely as possible when the blocks are likely to collapse and thus to anticipate this risk as efficiently as possible.

The project is being carried out with the financial support of the European Union and the Réunion region and in partnership with the  ip2i (Institute of Physics of the 2 infinities), IRIS Instruments and Muodim.