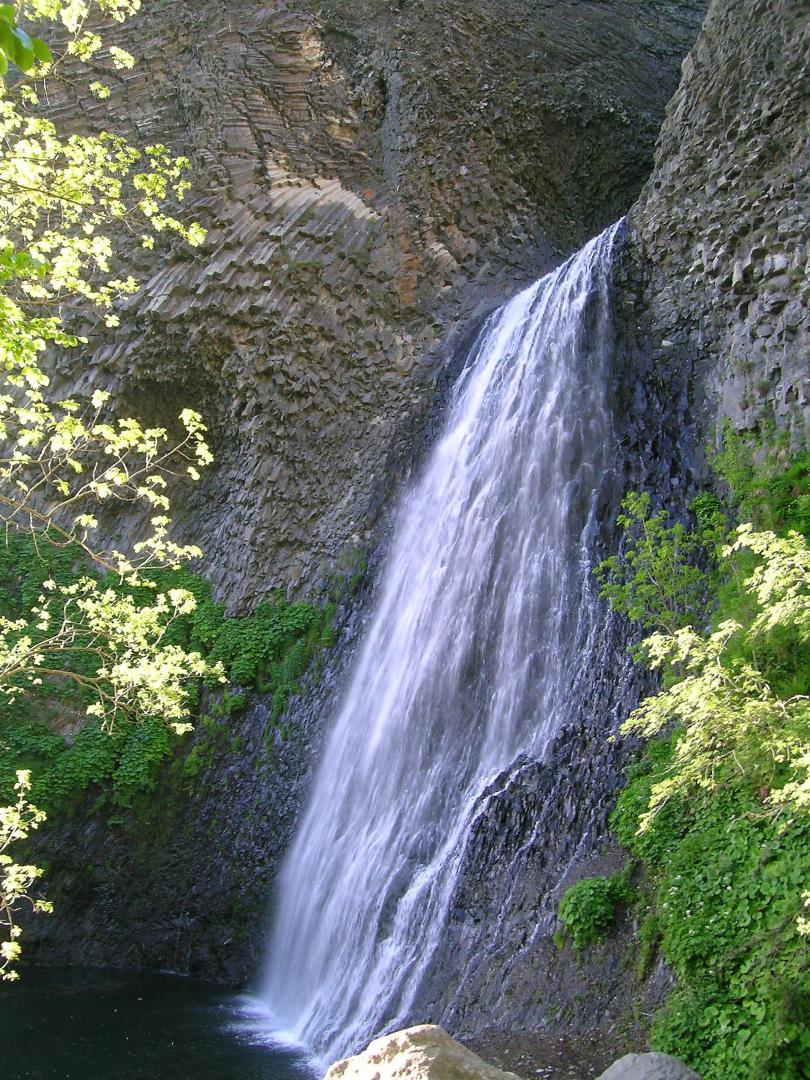 Share
Groundwater levels have been receding almost everywhere – this is usual for this time of the year since any rainfall that manages to soak into the ground is taken up by vegetation. 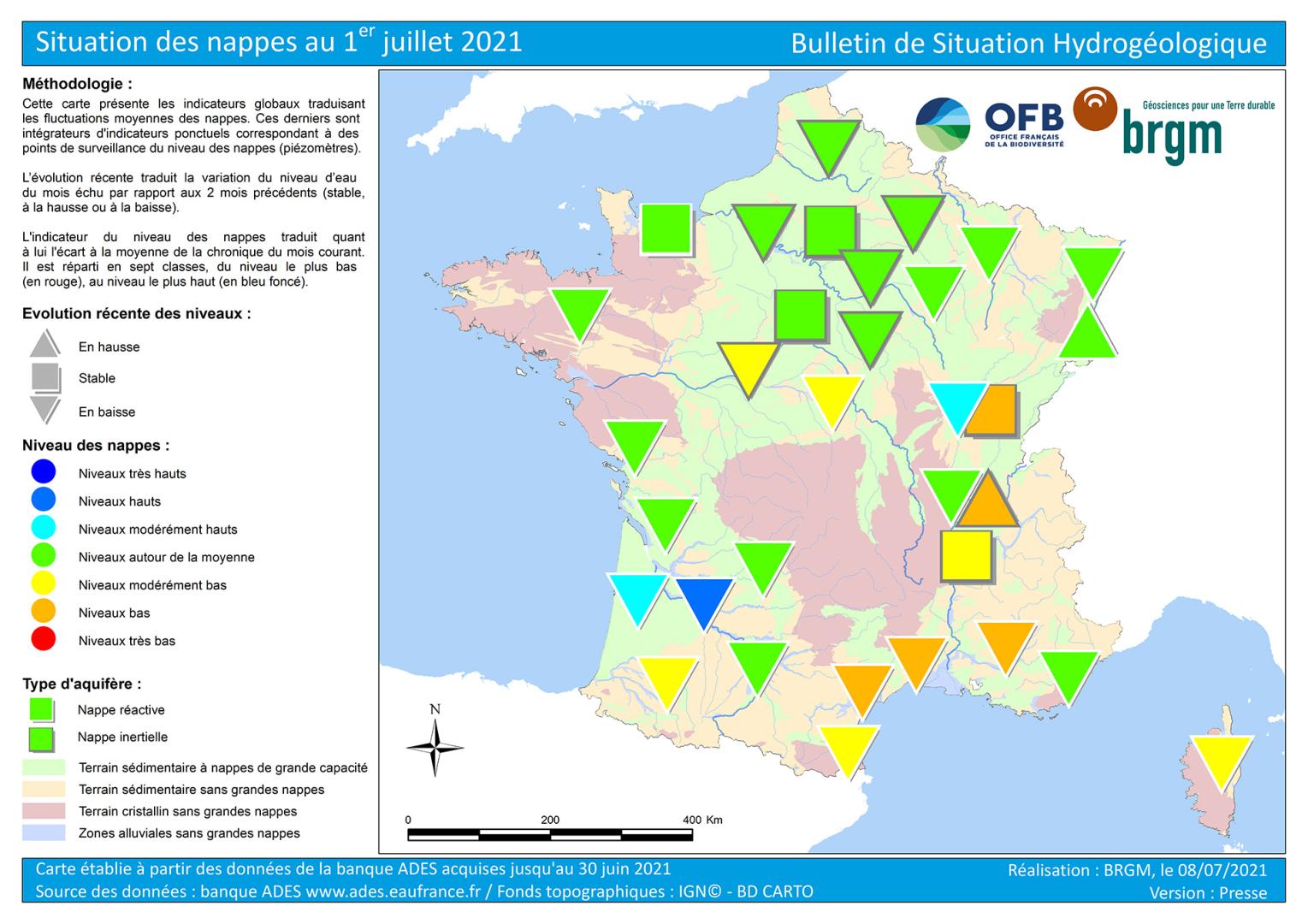 In June 2021, most aquifers experienced a downward trend. This is usual for this time of year. Any rainfall that manages to soak into the ground is taken up by vegetation and rarely replenishes the aquifers.

During the autumn and winter of 2020–2021, most of France experienced substantial groundwater recharge, except along the Mediterranean coastline, where recharge was very low. The recharge period ended a little earlier than usual, between February and April. A dry start to the spring resulted in unusually large drops in water levels.

In May and June 2021, rainfall moistened the ground and mainly benefitted the vegetation. Most of the rainfall did not soak deeper into the ground. Groundwater levels thus continued to drop almost everywhere. The rainfall was not sufficient to make up for the discharge of groundwater to natural discharge areas, such as wetlands, rivers and the sea, and for groundwater levels to rise again. There was enough rainfall, however, to slow down the rate of decline in most aquifers. Groundwater levels rose or remained stable locally, such as in the Bessin Jurassic limestones and the alluvial deposits of the Alsace plain, south of Colmar.

In the Rhône and Saône valleys, exceptional rainfall at the beginning of May resulted in a sudden but brief rise in groundwater levels in the more responsive alluvial deposits of the Rhône river and its tributaries. This was followed by a drop in groundwater levels in June. Heavy rainfall at the beginning of May slowly infiltrated deep into the ground, reaching the less responsive Pliocene and Quaternary formations and glacial river valleys in June, resulting in a rising or stable water table, an unusual trend for this period.

The absence of rainfall was felt along the Mediterranean coastline and in Corsica, with declining groundwater levels.

Situation in relation to the June averages

In June 2021, water levels showed large variations across basins, ranging from low to high. Generally, groundwater levels changed little compared to the previous month. Less responsive aquifers were not very sensitive to the spring and summer weather, while the rainfall in May and then June helped maintain the status of more responsive aquifers.

Across the northern third of France, the situation in the Brittany, Paris Basin, Artois and Rhine-Meuse aquifers remained stable, with moderately low levels, close to the June averages. The less responsive Chalk and Tertiary formations in the centre of the Paris Basin and in Artois were not very sensitive to drought or to summer rainfall. The responsive Armorican Massif basement, Jurassic limestones around the Paris Basin (Bessin, Berry, Côtes de Bars and Lorraine) and Alsace alluvial sheet benefitted from the rainfall of recent weeks. The situation differed markedly across these aquifers.

Groundwater levels in the Aquitaine Basin improved due to locally heavy rainfall in May and June. The situation was particularly good in the alluvial aquifers of the lower Garonne and Dordogne rivers and in the Pliocene and Quaternary formations. Water levels were lower than normal only in the Adour and Gave de Pau alluvial aquifers. Groundwater levels varied along the Mediterranean coastline and in Corsica, ranging from close to normal, to low. The 2020–2021 winter recharge was not at all sufficient and was not compensated by rainfall in May. The lack of rainfall in June resulted in receding groundwater levels. Highly sensitive karstic aquifers were particularly affected.

Several aquifers were in a good state, with June levels close to or above the averages for previous years:

The situation was not as good for some aquifers, and this requires closer monitoring, with levels below the averages recorded for June in all previous years.

Météo-France forecasts that July, August and September will be warmer and drier than normal over most of France. The forecast for the far north of France does not reveal any dominant scenario.

The rainfall in summer does not usually lead to groundwater recharge. The water that soaks into the ground is usually taken up by vegetation, and summer storms result in more runoff and less effective infiltration. The drop in groundwater levels is thus likely to continue across all of France until the vegetation becomes dormant and until there are abundant rainfall episodes.

Responsive aquifers, particularly alluvial, basement and Jurassic limestone aquifers, are sensitive to the lack of rain. Trends and changes in groundwater levels will mainly depend on effective local rainfall and on water use levels.

Over most of the north and west of the country, the rainfall in May and June allowed groundwater levels to remain close to normal. The benefit of these recharge episodes should last into July. However, the situation could deteriorate rapidly during the summer in the event of prolonged seasonal drought.

Water levels should remain satisfactory during the summer in the alluvial aquifers of the Garonne river and its tributaries and in the Pliocene and Quaternary formations of the Atlantic coast. These areas benefitted from very abundant recharge during the winter of 2020–2021, with additional rainfall in May and June.

Along the Mediterranean coastline, groundwater levels will most likely drop over the next few weeks, and the situation could become difficult in some areas.

The less responsive aquifers of the Paris Basin and the Rhône valley are not very sensitive to summer drought. The downward trend is expected to persist until the autumn. Groundwater levels are not likely to get worse, except in areas with high rates of abstraction.

Groundwater levels should remain close to monthly norms in the Paris Basin Chalk and Tertiary formations. These aquifers benefitted from excess recharge during the winter of 2020–2021.

The Pliocene and Quaternary formations of Bourgogne-Franche-Comté and the glacial Rhône valley have experienced several successive winters with low recharge. The rainfall during the winter of 2020–2021 was not sufficient to make up for the lack of winter recharge. These aquifers may thus no longer play their role in mitigating low water levels in the Rhône and its tributaries.