There is a strong risk of drought this summer of 2022

Share
For this summer of 2022, the forecasts for aquifers are rather pessimistic, with a strong to very strong risk of drought affecting most of the country.

Risk of drought on strategically important water tables in 2022.

What is the risk of drought for aquifers in mainland France for this summer of 2022?

Drought risk is defined as the possibility of their reaching, by August-September 2022:

For this summer of 2022, the forecasts for the aquifers are rather pessimistic.

In order to protect our water resources, it is essential to follow the measures prescribed by the government to save this vital resource. These measures ensure that water levels in the aquifers will be sufficient to supply drinking water to the population and to regulate the flow of rivers.

In dark red on the map

The “very high” risk of drought has indeed been confirmed in the South-East and concerns the karst limestone water tables of Provence, the alluvial aquifers and the tertiary formations of the Côte d'Azur. The risk also affects the Centre-West, including the Jurassic limestone aquifers of Charentes, Brenne and Poitou, the Cenomanian sands aquifer of Perche and Maine and the Seno-Turonian chalk aquifer of Touraine.

In these areas, groundwater restrictions have already been put in place and the situation is unlikely to improve over the coming weeks.

In light red on the map

The “high risk” areas have aquifers that are already below normal levels. Their situation could deteriorate rapidly, either due to the lack of sufficient rainfall or to intensive pumping.

Dark green or light green on the map

Finally, the levels of the aquifers identified as “very low” to “low” risk should remain satisfactory throughout the summer. These are inertial aquifers that are not very sensitive to the current year's drought, or reactive aquifers that have benefited from satisfactory recharge.

However, tensions could arise locally, in the event of heavy abstraction of groundwater.

Details of the methodology used to develop the drought risk map.

How is the drought map made?

From spring through summer, rising temperatures, the regrowth of vegetation and thus increased evapo-transpiration usually limit the infiltration of rainfall into groundwater. Between May and October, barring exceptional rainfall events, depletion usually continues and levels continue to fall until the autumn. The evolution of the groundwater situation in the coming months of 2022 will therefore depend on whether effective rainfall manages to infiltrate deep into the ground, on water abstractions and on the resistance of the aquifers to drought.

For reactive aquifers, if rainfall is insufficient, they will probably continue to be depleted, and the situation will thus deteriorate further. Significant rainfall events could nevertheless cause momentary recharges, allowing levels to be sustained temporarily or even, very occasionally, to rise.

The seasonal forecasts of Météo-France indicate a warmer than normal scenario for the whole of France and drier than normal for the southern half.

Consequently, the drought risk map has been drawn up on a pessimistic assumption, considering that the situation of the water tables will probably continue to deteriorate during the coming months. However, it is still possible that oceanic weather fronts crossing France might generate significant recharge episodes. The start of irrigation campaigns could also influence the state of the aquifers.

Read the full article on “The Conversation” 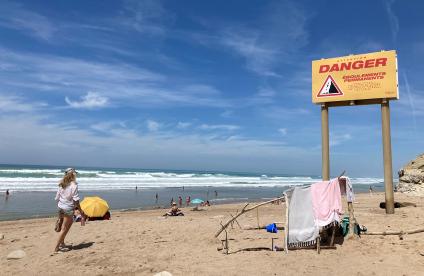