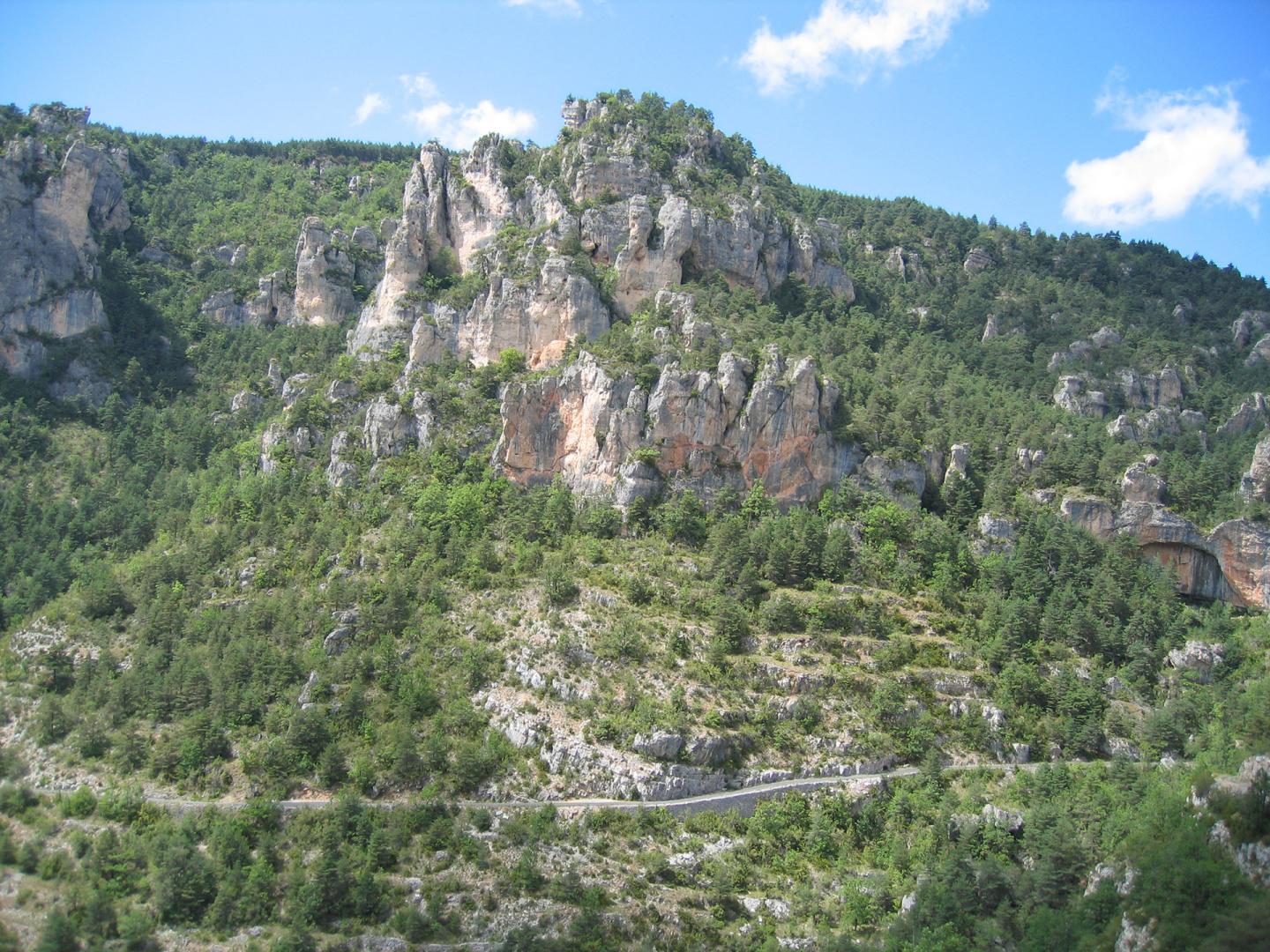 Share
The second phase of this vulnerability study identified 135 sub-sectors along the stretch of road studied (52 in the Gard and 83 in Lozère). For each of these sectors, the analysis conducted by BRGM made it possible to establish a level of exposure and to set out recommendations for management including costing for the suggested solutions.

As part of its Road Improvement Programme (PAI) on the RN 106, the Direction Interdépartementale des Routes Méditerranée (DIR MED) asked BRGM to carry out a vulnerability study on a 42 km stretch of RN 106 between PRs (waypoints) 48+000 and 67+000 in the Gard and PRs 0+000 and 23+000 in Lozère. The RN 106 links the two departments, running between Alès and the Jalcreste pass, along the Gardon d'Alès river. It is one of the main roads between the Cévennes and south-east France.

The first phase of the study was based on the various surveys conducted on the RN 106 over the past 40 years (DIR-MED, CEI, Cerema). Field visits conducted at the same time as this documentary study provided the basis for dividing the study area into 54 sectors of homogeneous characteristics (in terms of geomorphology and ground movement typology).

In the second phase of the study, these 54 sectors were sub-divided into sub-sectors of homogeneous exposure in order to better represent specific local characteristics and the associated hazards, and thus to make appropriate proposals for management. Finally, the stretch of road was divided into 135 sub-sectors with a homogeneous level of exposure.

For each sub-sector, a morphological description indicates the bank and slope, together with an inventory of the events recorded and any existing countermeasures. Hazards were then identified and characterised. For rockfalls, hazard propagation was assessed "by expert opinion" and/or modelled using the ELANA tool, developed by BRGM, which is able to map the propagation of rockfalls.

Based on this information, 290 management proposals (type of safety work and priorities for action) were defined for each sub-sector in order to better manage hazards along the sectors under study (98 in the Gard and 192 in Lozère). These proposals were then ranked according to the urgency of their implementation, from A1 (103 urgent actions) to A3 (58 actions). For each proposal, an initial estimate was made of the costs of the protection work to be carried out, based on market prices. Among other things, each estimate includes the costs of site installation and operation. For the three levels of priority, an initial estimate of the overall cost of the suggested actions amounts to: 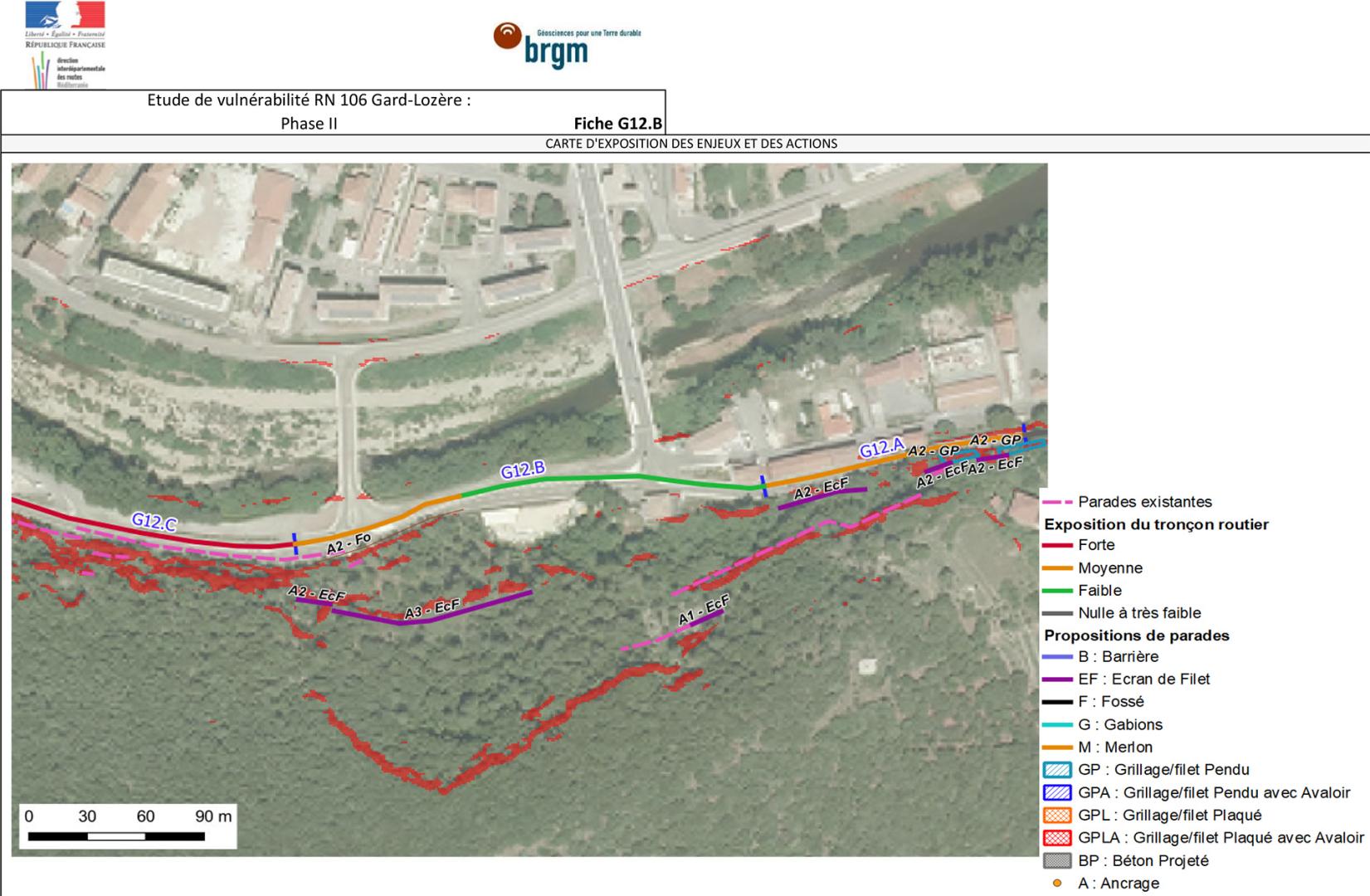 Exposure map of the issues and proposals for protective work, RN 106 Lozère.

All the information produced as part of the study has been summarised, for each sub-sector, in 6-page sheets. These sheets also include cost estimates for the management actions to be put in place. This cost was also broken down by department. All these items provide the DIR MED with a useful sectoral data base for implementing an appropriate management plan taking account of gravity hazards along the RN 106. 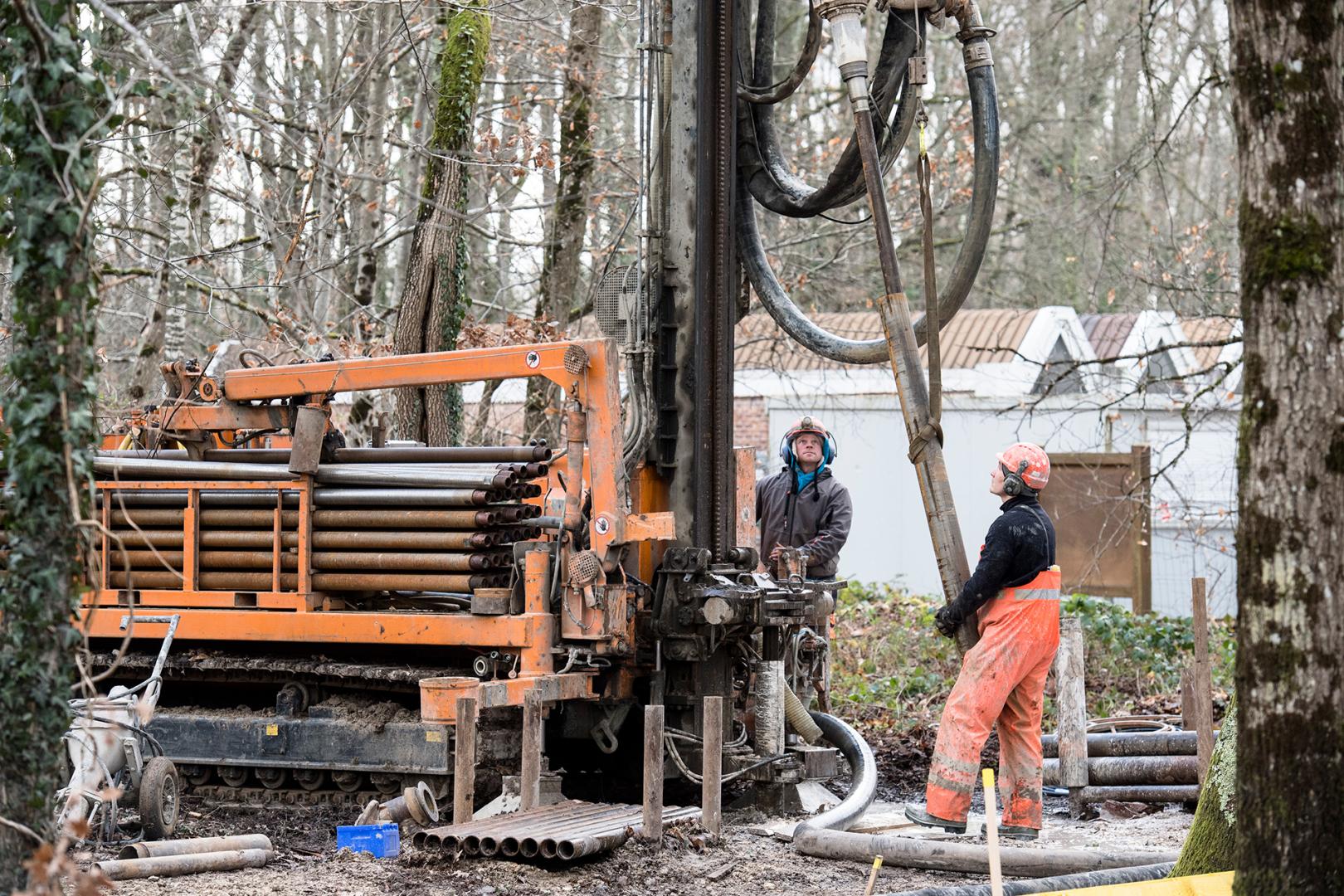 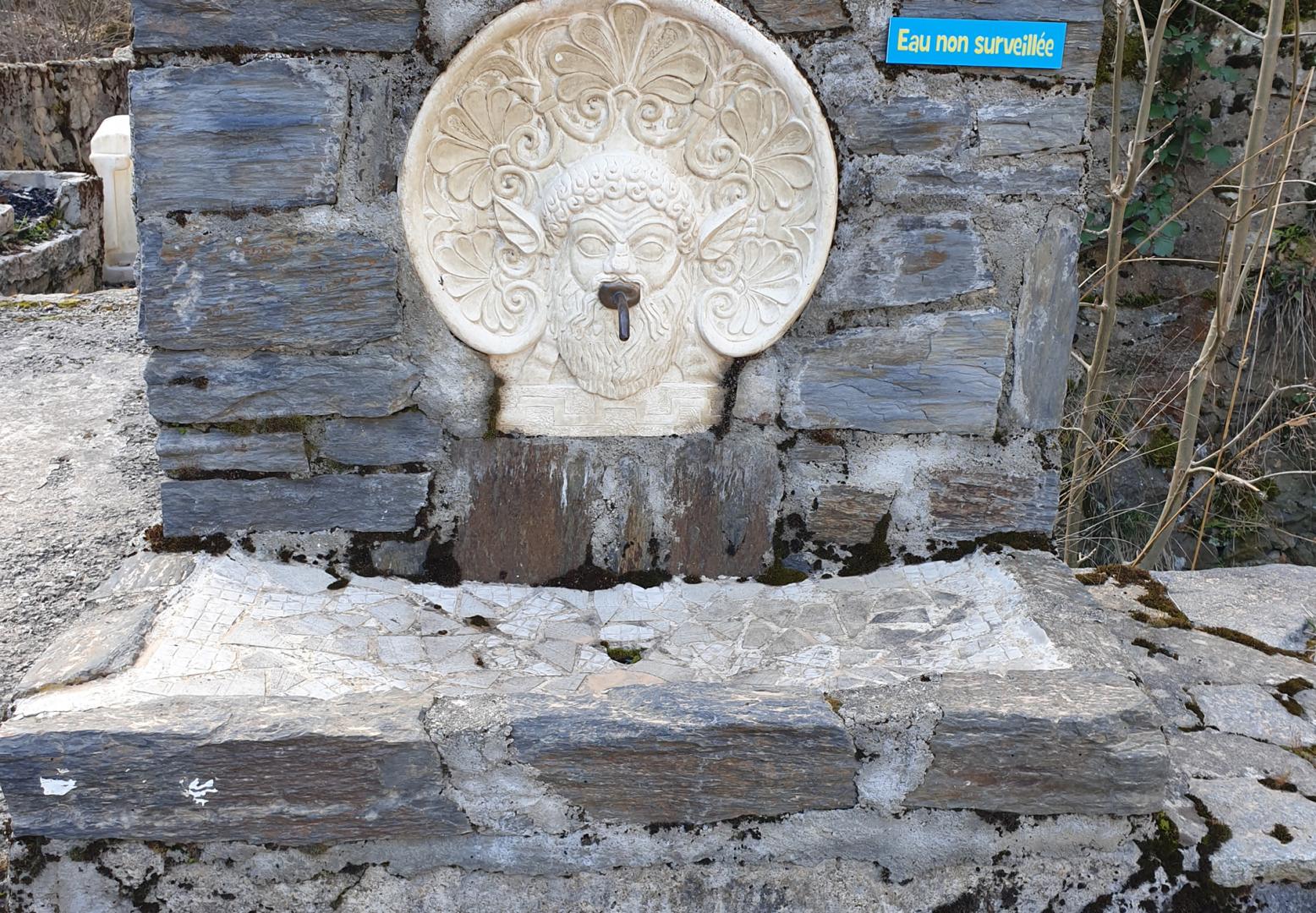 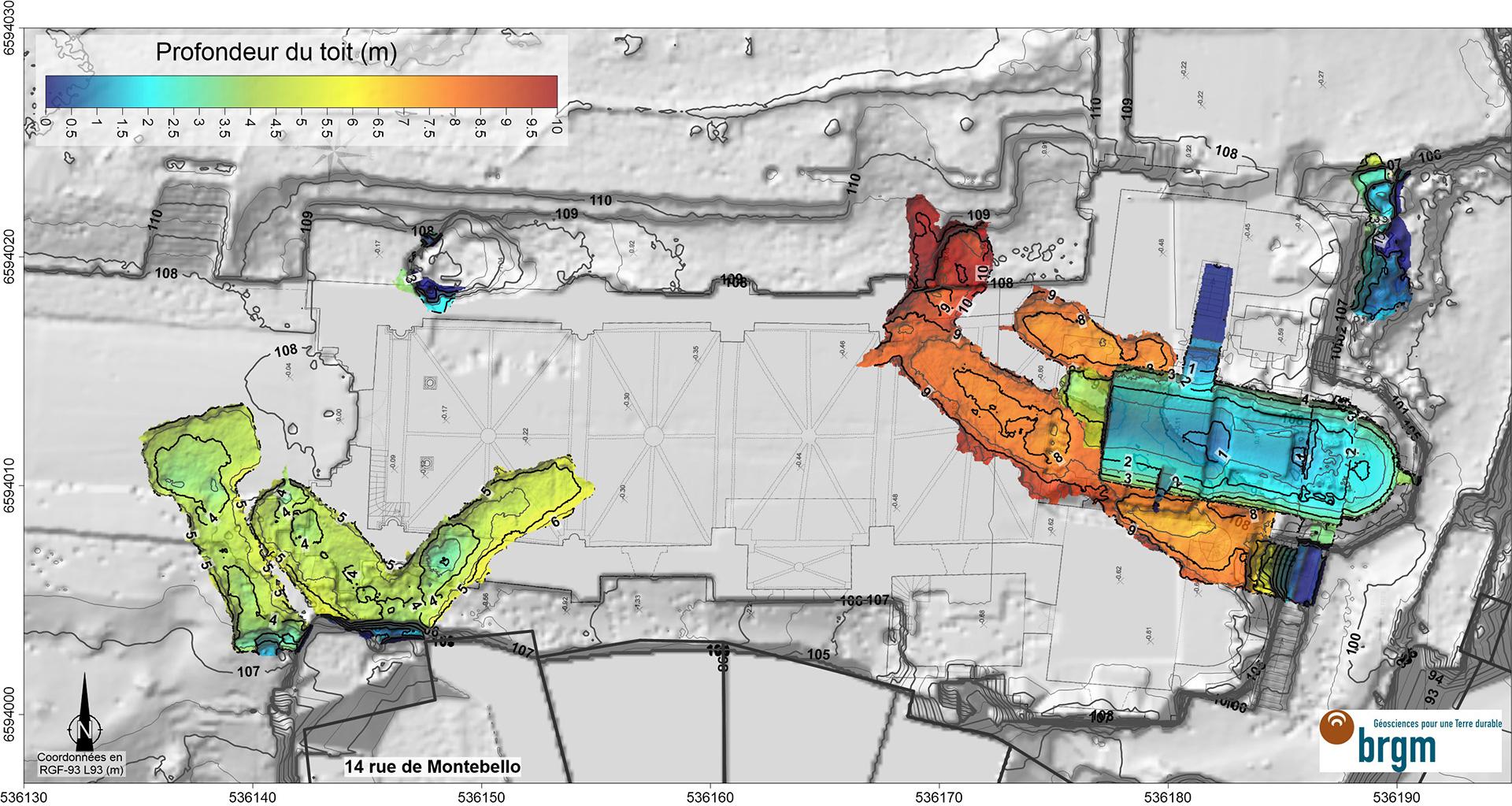 Reference, completed project
Searching for cavities under the church of Montmorillon (Vienne département) by combining microgravimetry and 3D laser scanning
All the references
Newsletter