Share
Prior to undertaking major construction projects, a big challenge is to acquire accurate information about the subsurface at great depths in order to reduce the uncertainties due to the complexity of the natural environment. As part of the project to build a water transfer tunnel on Reunion Island, BRGM and its partners have demonstrated the ability of helicopter-borne geophysics to image the subsurface in 3D at depths of up to 1,000 metres, with the aim of countering hydrogeological risks by interpreting the data and using them for geological and hydrogeological modelling. 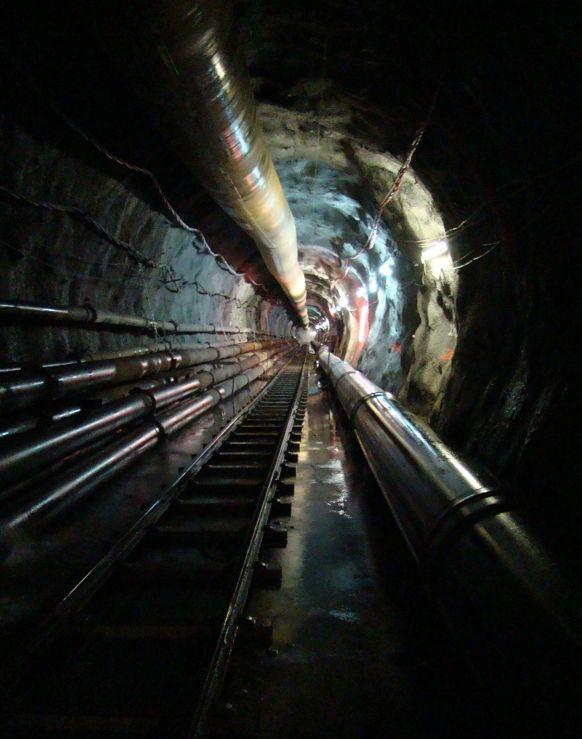 Within the framework of its spatial planning policy concerning the development of sugar cane irrigation, the Reunion Departmental Council wishes to construct an underground connection between the current East/West water transfer gallery and the northern coast of Reunion Island. Called GANOR, this connection is to be made via an underground gallery, about 6 km long, dug at a depth of 1,000 m below the surface. In this sector, large water inflows, with a flow rate of the order of one m3/s, caused major disturbances during the excavation of the East/West transfer gallery in the 2000s. The risk of encountering new water inflows during the excavation of the future GANOR gallery was therefore a major issue for the Departmental Council and the Water Board.

In 2020, a first project enabled a preliminary interpretation of the 2014 helicopter-borne geophysical survey over the Plaine de Fougères and a first 3D geological model of the subsurface in the study area. However, the latter revealed gaps in knowledge at more than 300 m below the surface: it was therefore necessary to characterise the formations deeper down in order to enlighten decision-makers for the construction of the future GANOR gallery.

A new deep helicopter-borne geophysical survey to measure electrical resistivity and magnetism down to 1,000 m was thus undertaken in June 2021. An exceptional density of airborne geophysical data is thus available for the Plaine des Fougères, a notable achievement within the international geophysics community. 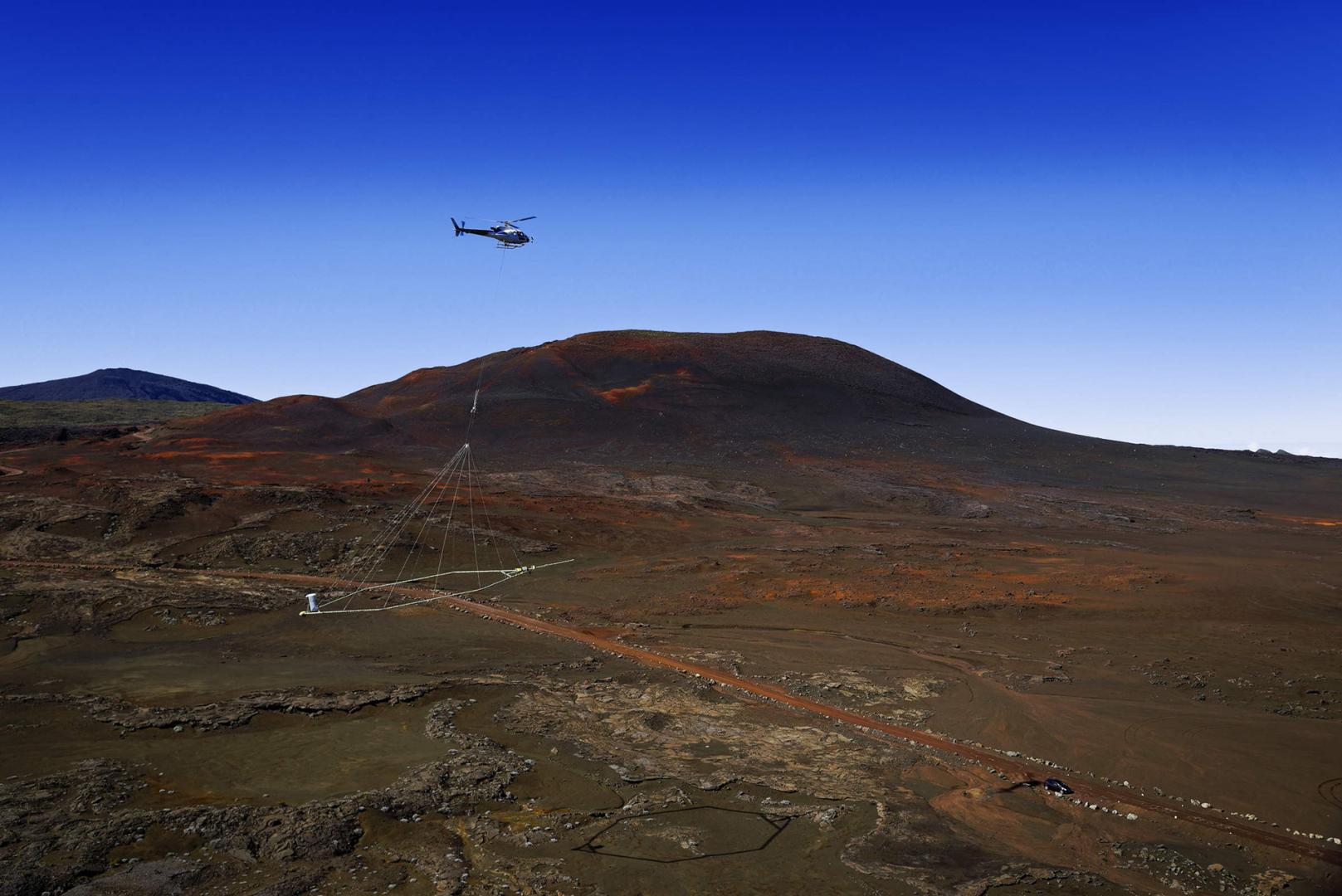 We have a long-standing partnership with the BRGM regional head office of La Réunion via a support agreement. It was therefore natural for us to call upon it for this project. We needed its expertise in new techniques to carry out an underground survey. This enabled us to identify several scenarios for the positioning of the main groundwater supply system and to provide the prime contractor with reliable information for carrying out the work. 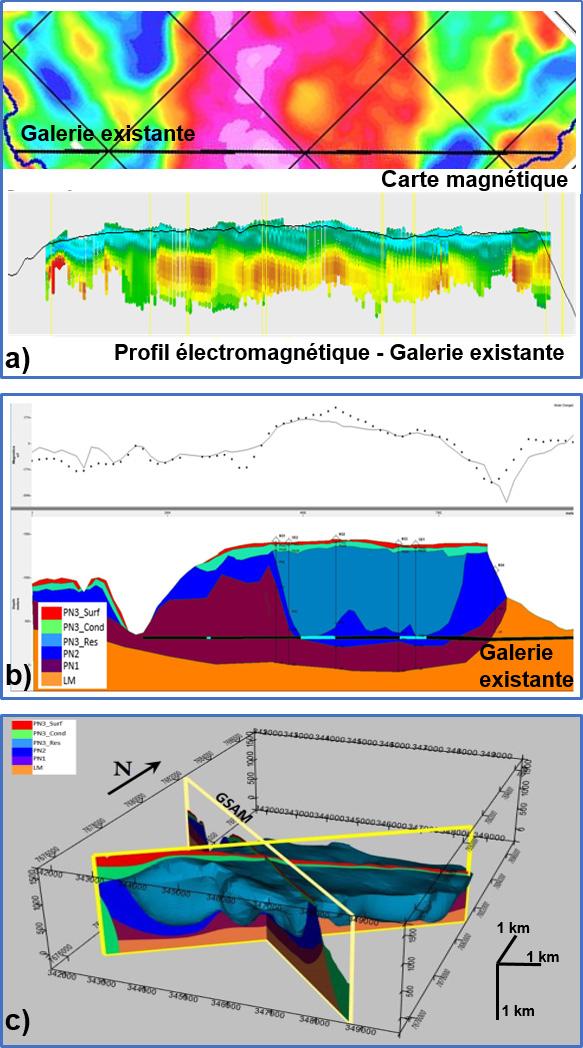 Water transfer gallery on Reunion Island (GANOR). Acquisition (a) and coupling (b) of resistivity and magnetism to constrain the baseline 3D geomodel (c) for hydrodynamic simulation.

The purpose of this survey was to improve the 3D geological and hydrogeological model of the Plaine des Fougères subsurface, and in particular the extension and geometry of the volcanic formations, based on the joint analysis of electromagnetic and magnetic data constrained by petrophysical measurements. This geometric geological model was then translated into hydrogeological models incorporating the main flow and drainage orientations and their possible connections, in order to assess the hydrogeological risk of each proposed GANOR route. In practical terms, the objective was to position the gallery away from significant water flows in order to be able to excavate in “dry” geological formations.

The task was carried out in partnership with SISKA using the Visual KARSYS tool.

The combination of BRGM's methods and specialised skills has enabled detailed quantification of the complexity of the subsurface at great depth. The 3D modelling of the geophysical information developed through state-of-the-art scientific approaches has led to operational results, in particular the optimisation of the GANOR route.