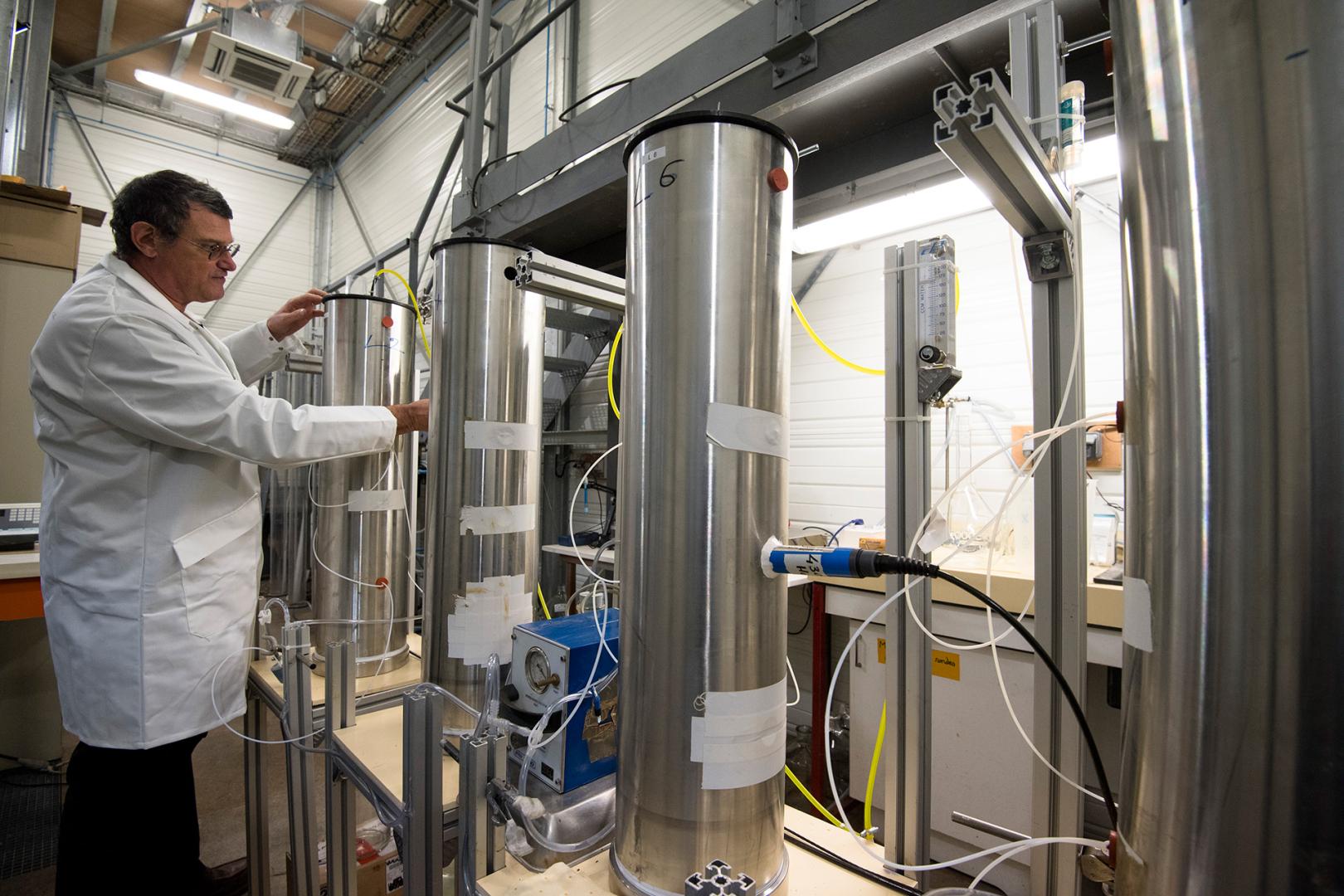 Share
Our environment is threatened by all kinds of contaminants. The different forms of contamination need to be understood in order to protect and restore natural environments. This is the aim of the PIVOTS programme.

PIVOTS is a set of seven scientific platforms which are unique in France. They were set up in the Centre-Val de Loire region in 2016. The programme draws on both laboratory research and field experiments in order to better diagnose contamination and clean up pollution in the environment. This will enable us to sustainably manage our natural resources – soil, subsurface, water and air.

What is PRIME? PRIME is an innovative testing laboratory for soil and water remediation! Find out how it can help you develop your processes. PRIME is an intermediate link between laboratories and the contaminated sites. It enables the development, qualification and validation, at different scales, of the tools, models and methods needed to identify pollution, predict its potential impact and remedy it in an innovative and environmentally friendly manner.

O-ZNS: the observatory of transfers in the non-saturated zone

The Beauce water table, the largest drinking water reserve in France, is highly polluted relative to human activities and materialized by high levels of nitrates and pesticides still found today in groundwater. The O-ZNS platform, with its exceptional dimensions (20m deep and 4m in diameter), aims to understand how and how quickly water and contaminants flow from the soil surface to the water table.

Groundwater tables are our drinking-water reserves. They are often contaminated, by nitrates, for example, mainly of agricultural origin and emerging pollutants such as endocrine disruptors. Today we still don't understand the mechanisms that work beneath us, like the processes of water transfer in subsoil to the groundwater table, and especially the behavior and the fate of the elements that water takes with it. To respond to these issues, the Institute of Earth Sciences in Orléans has launched the O-ZNS program, which observes the unsaturated zone. This research project aims to identify how these pollutants penetrate the unsaturated zone from the surface to the groundwater table. The unsaturated zone contains water and air, and there the pollutants are likely to transform. The transfer of pollutants is subject to interactions, especially with water, gases, and minerals. The roots and micro-organisms also play an important role in the fate of farming pollutants. It's firstly groundwork for the O-ZNS team. This one was set up on an agricultural plot in Beauce to carry out the research. O-ZNS has a tool which is large-scale and unique in Europe with the construction in 2021 of an access well in the unsaturated zone. These exceptional dimensions that are 20 m deep and have a 4-m diameter are a great technological and scientific challenge pointed to O-ZNS's aims.

The DECAP platform is part of the PIVOTS programme in the Centre-Val de Loire region. It aims to develop sensors to detect micropollutants and clean up pollution in the environment.

Pesticides, medicines, heavy metals, household products, human activity generates a large amount of chemical substances in the environment, notably in water. These pollutants are not always treated correctly in water-treatment plants. They are present in too small quantities to be treated by traditional methods.

Detecting and treating these micropollutants is the work of Decap, a platform which is part of the Pivots programme, a unique group of 7 scientific platforms dedicated to preserving the environment. Pivots is situated in the Centre-Val-de-Loire region. Decap laboratories concentrate on ten or so substances present in the region. The aim is to find low-cost solutions which can be applied on a large scale.

If we offer a sensor that is too expensive, but detects everything, it's of no interest. No company will produce it. The goal is to have low-cost sensors which can be produced on a large scale and deployed on a large scale. We create our sensors from scratch. We work on the material. Mainly sensors made from carbon. Why? It's a question of cost.

Next we work on modifying the surface. We make the sensors functional so they detect certain pollutants.

The aim is to put our sensors in watercourses so that we will have a network of intelligent sensors across all our watercourses so we can offer real-time detection with a single operator running everything, and in case of pollution, they can take the necessary action to stop the pollution of the watercourse for example.

Once detected, the pollution must be cleared, another one of Decap's activities.

We develop advanced oxidation processes which will create types which will react effectively with the micropollutant. We will generate hydroxyl radicals, OH radicals, which will be more reactive with the micropollutant than chlorine, which you find traditionally in cleaning and degradation processes. We will pair up the processes at ICMN and GREMI in order to find the best processes, the ones most effective for treating micropollutants, and be able to generate types which are not toxic downstream and which can be treated in conventional water-treatment plants.

PRAT: impact of gaseous and particulate pollutants on health, climate and the environment

The PRAT (Platform on atmospheric reactivity) project is managed by CNRS and the University of Orléans. The platform aims to study the impact of this type of pollution on health, climate and the environment.

Over several decades, worrying changes in the chemical composition of the atmosphere have been observed. These are largely related to human activity and can cause pollution or harm to both people and the environment, or even contribute to climate change.

According to the World Health Organization, air pollution is responsible for killing seven million people a year and harming billions more. Many air pollutants are potent greenhouse gases, agents of climatic change, which are predicted to devastate the global economy and disproportionately affect the world's most vulnerable people. Industry, transport, heating, cooking, agriculture: the sources of indoor and outdoor air pollution are many, which makes studying its effects challenging.

Via the PIVOTS environmental research programme, the Centre Val de Loire region, located in France, is equipped with a platform called PRAT, which analyses polluting substances in the air and studies their development.

The chamber is filled with purified air matching the temperature and pressure of the atmosphere. The researchers then introduce a gaseous or suspended particulate pollutant together with the ingredients for its transformation. This pollutant is then broken down by the same chemical cycles found in the atmosphere or is destroyed directly by the sun's rays. The analysis of the results in the laboratory situated below the chamber shows how quickly the pollutant disappears and what changes it undergoes. A pollutant can undergo many such changes. And it is only by studying these processes that we can understand its impact on our health and our planet.