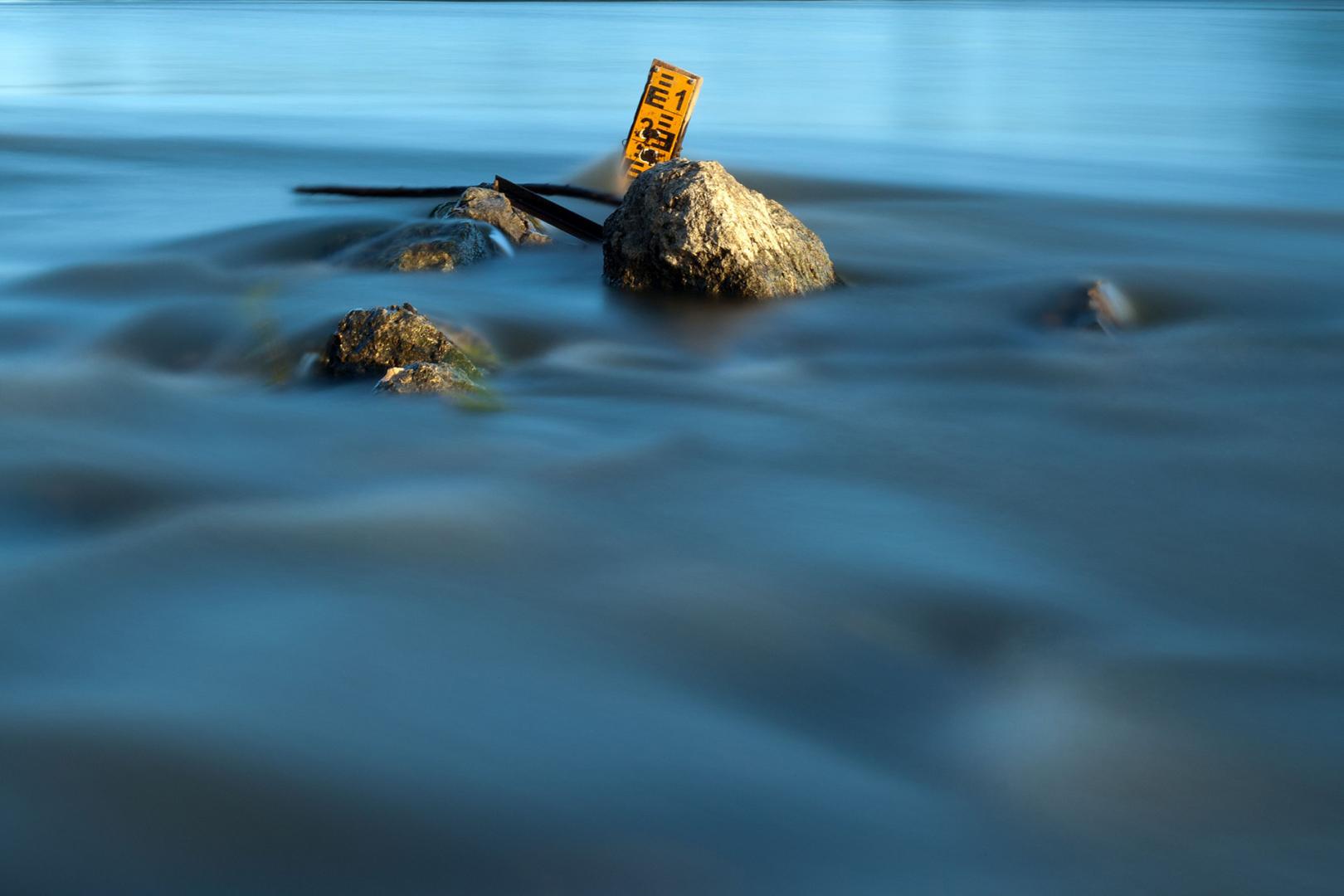 Share
The groundwater table situation in August was generally very satisfactory, with levels comparable to or well above the monthly averages. 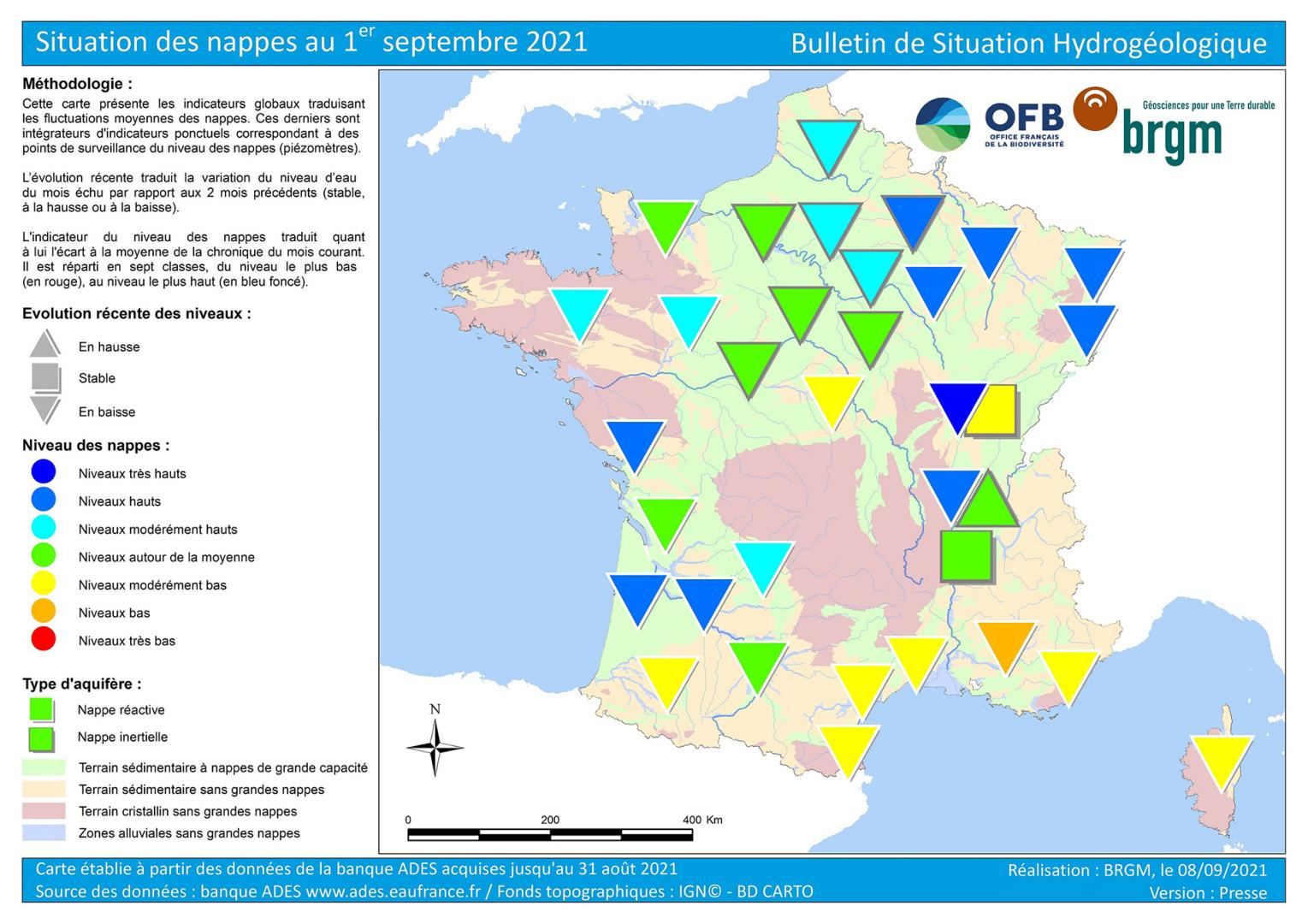 Map of groundwater tables in France on 1 September 2021.

The spring and early summer of 2021 were very atypical, with exceptional recharge episodes for this period. August was a period of active depletion with downward trends, which is usual at this time of year. This is because August rainfall, which soaks into the ground, is taken up by vegetation and rarely replenishes the groundwater tables.

The situation in August was generally very satisfactory, with levels comparable to or well above the monthly averages. It remains less satisfactory, with moderately low levels, for the Berry limestone aquifers, the Adour and Gave de Pau alluvial aquifers, for the aquifers of alluvial deposits, karsts and complex formations around the Mediterranean and for the Corsican alluvial aquifers. The situation remains strained in Provence, with low levels.

In September, the trends for inert aquifers were expected to continue to decline and their state was not expected to change much. For reactive aquifers, trends and developments will mainly depend on recharge due to local rainfall and demand for water. The situation of inertial and reactive aquifers should remain satisfactory over a large part of the territory. Levels could become problematic in the reactive aquifers around the Mediterranean, particularly in Provence.

During the autumn and winter of 2020–2021, most of France experienced substantial groundwater recharge, except along the Mediterranean coastline, where recharge was very low. The groundwater depletion period ended a little earlier than usual, between February and April. A dry start to the spring resulted in unusually large drops in groundwater tables. The end of spring and early summer in 2021 proved to be atypical: the abundant rainfall between May and July combined with low evapotranspiration, slowed down the depletion rate and even led to exceptional recharging episodes at times.

In August 2021, levels fell and summer depletion continued or restarted in all the aquifers. This phenomenon is usual during the summer: summer rainfall rarely generates enough effective rainfall to recharge the groundwater tables, as the water that does manage to infiltrate the ground is entirely taken up by the vegetation.

The only exceptions are some inertial aquifers that are still showing rising or stable levels. These very unusual trends at this time of year are the result of slow infiltration of the heavy rains of June and July. The phenomenon has been observed, in particular, for the inertial aquifers of the plio-quaternary formations and the fluvio-glacial corridors of the Rhône and the Saône. Stable trends can also be observed locally in the Beauce aquifer and the Normandy chalk aquifer.

Situation in relation to August averages

In August 2021, the situation of the aquifers changed little compared to the previous month. It remains particularly satisfactory over a large part of the territory, with levels comparable to normal to very high, and more fragile for the Mediterranean coastline and Corsican aquifers.

In the northern half of France, levels are high in the Grand-Est region, the Rhine-Meuse basin and the upstream Seine basin. They are moderately high at around the monthly average in Artois, the middle and lower Seine basins, the Loire basin and in Brittany. This favourable situation is explained in particular by the recharge episodes recorded in June and July, which had an impact on the reactive and inertial aquifers. The state of the aquifers can differ more locally and reach moderately low levels in the aquifers of the Massif Armoricain, the Normandy chalk, the Beauce limestone and especially the Berry limestone formations.

In the Aquitaine Basin, the situation is satisfactory with levels close to the normal to high monthly averages. This is due to the exceptional recharges of the two previous autumns and winters, completed by the wet months of May to July. Groundwater tables were lower than normal monthly levels only in the Adour and Gave de Pau alluvial aquifers.

In the Rhône basin, the water levels in the alluvial deposits of the Rhône, the Saône and their tributaries are very satisfactory, from comparable to normal to very high. The significant rainfall between May and July has helped to recharge these surface waters and considerably improve their condition. The inertial aquifers of the plio-quaternary formations show less favourable levels, from moderately low to comparable to normal. The situation may be more strained locally, with low to very low levels. These water tables are evolving very slowly and the unusual recharges of recent weeks have not made up for the deficits of previous winters.

In the south, along the Mediterranean coastline and in Corsica, the situation is fragile but this has usually been the case in recent years at the end of the summer depletion period. Groundwater levels are moderately low to low. They are locally more heterogeneous, from moderately high to very low, depending on local rainfall and the capacity of the groundwater table to resist drought.

Several aquifers are in a very good condition, with high to very high levels in relation to August levels in previous years:

The situation is not as good for some aquifers, with levels below August averages, and they require close monitoring:

The forecasts of MétéoFrance do not favour any particular scenario for the months of September, October and November for temperatures and precipitation throughout the country.

The rainfall in summer does not usually lead to aquifer recharge. The water that soaks into the ground is usually taken up by vegetation and, furthermore, summer storms result in more runoff and less effective rainwater infiltration. The drop in groundwater tables is likely to continue across all of France until the vegetation becomes dormant and until there are abundant rainfall episodes, i.e., until from mid-October to the end of November.

The rainfall in September should therefore not lead to significant recharging of the groundwater. Stable or increasing trends might be observed, but only in areas with rainfall that include reactive aquifers (notably alluvial, and karstic limestone and basement aquifers).

With respect to the reactive aquifers along the Mediterranean coastline, in Corsica and limestone formations in the Berry, groundwater tables are highly likely to fall in September and the situation could become difficult locally in some aquifers that are subject to high demand. However, water demands are expected to decrease and possible rainfall could limit the drop in levels and alleviate low water levels in water courses.

In the reactive aquifers of the rest of France, the rainfall between May and July kept the groundwater tables favourable, above normal levels. The benefit of these recharge periods is expected to continue in September and the situation should remain satisfactory.

The inertial aquifers of the Paris Basin and the Rhône valley are not very sensitive to summer rainfall due to their high level of inertia. Their situations are not expected to change between August and September. The situation is therefore expected to remain satisfactory, with aquifer levels close to normal monthly values in the chalk and tertiary formations of the Paris Basin. Groundwater tables in the Burgundy-Franche-Comté plio-quaternary gravel and in the fluvio-glacial corridors of the Rhône are expected to remain close to or below normal monthly levels.