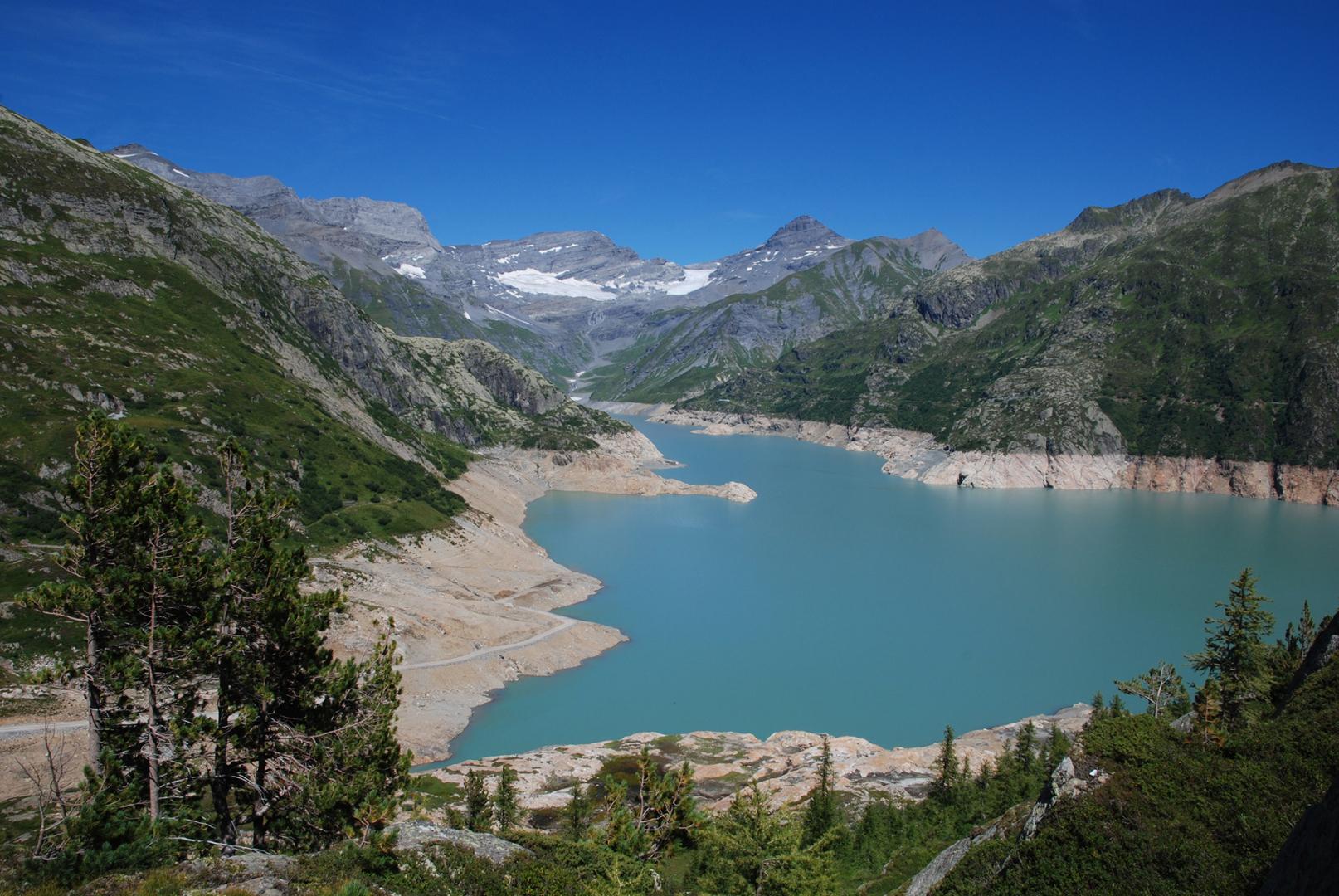 Share
Aquifer levels at the start of winter will be significantly lower than last year. The only way of maintaining their levels is to limit the abstraction of water. 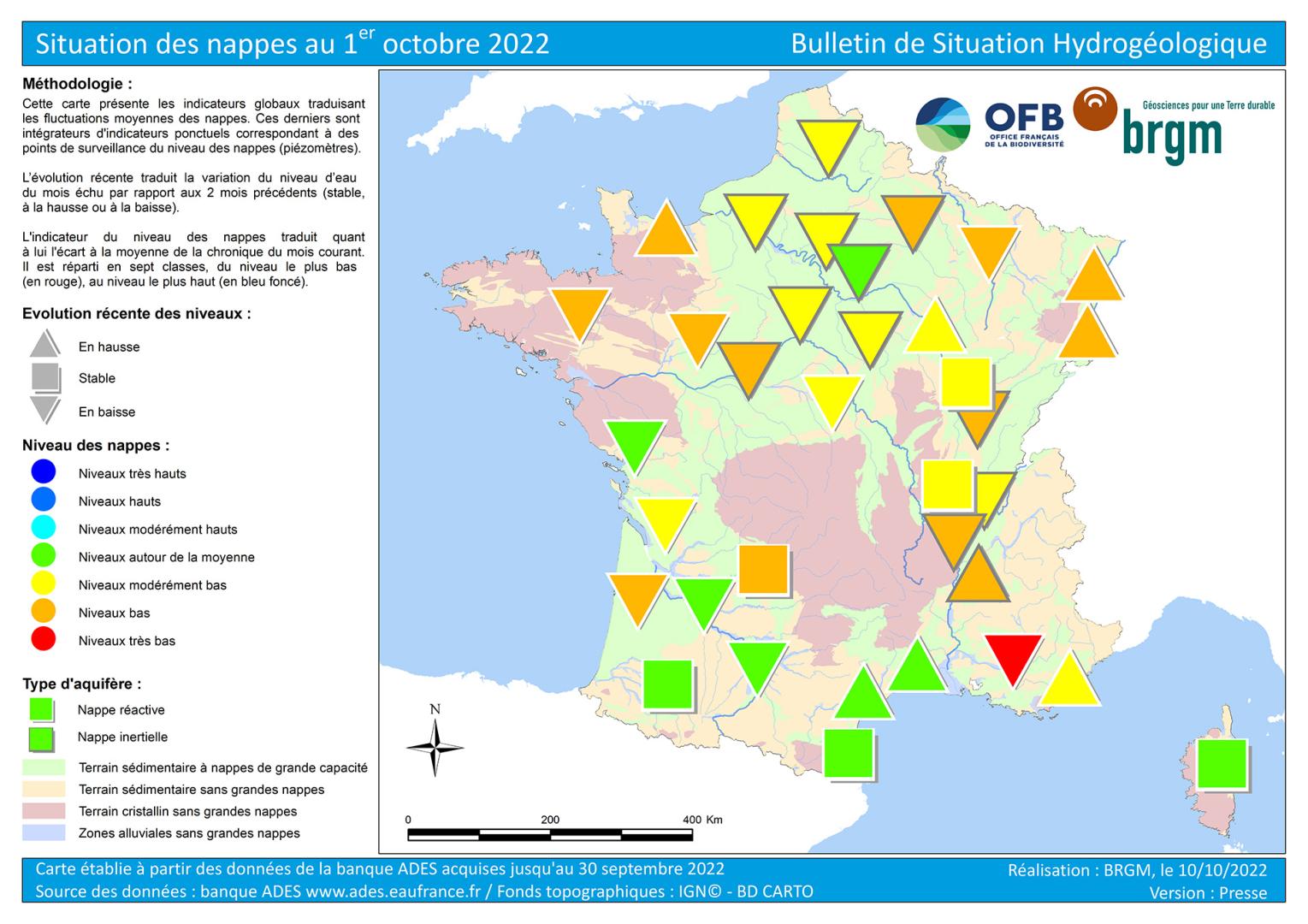 Map of aquifer levels in France on 1 October 2022.

In September, the trends differed according to the rainfall received and the reactivity of the aquifers. Depletion continues over a large part of France, albeit at a slower pace, with most aquifers having lower levels. Levels have risen or remained stable only in areas that have benefited from rainfall and that have reactive aquifers, particularly in southern and eastern France.

Many aquifers still have unsatisfactory levels, from low to very low in some places. The situation is particularly worrying for aquifers in the karst limestone formations of Provence. Here, the low water level is extreme, with very low levels and several dry spots. The rainfall infiltrating deeply had a positive impact, mainly in aquifers along the Mediterranean coast.

The recharge period seems to be about to start and aquifer levels should gradually start rising over the next few weeks. In October, the levels should rise in areas that benefited from rainfall and that have reactive aquifers. This would then improve the situation. The levels of inertial aquifers are expected to continue falling or to stabilise slowly, and the situation is not expected to change.

The 2022 low-water period has been particularly severe, except in the south-west, with levels at the start of winter being significantly lower than last year. The only way of preserving the state of the aquifers, and thus maintaining continuity between groundwater and surface water to prepare for 2023, is to limit water abstraction. The 2022-2023 recharge period will determine next year's levels. Heavy and prolonged rainfall will be needed in the coming months and into the spring to replenish reserves in a sustainable way. The situation should be monitored across the whole country throughout the recharging period.

After a depletion period that began early, between January and March 2022, levels generally declined throughout the spring and summer. In May and June, aquifer discharge was faster than usual, owing to a deficit in rainfall combined with strong demand for water. The pace of depletion slowed in July and August in many aquifers, with the limits on abstraction, and occasional and localised recharge episodes.

September seems to mark the end of the 2021-2022 hydrological year, with the second part of the month being marked by the first significant rainfall and a drop in temperatures. However, the amount of rainfall infiltrating at depth remains low, due to the very dry soils and the level of consumption by vegetation.

Elsewhere, depletion continued during September but at a slower pace in many aquifers, suggesting the beginning of winter recharge. Depending on the context, the discharge of the aquifers can be intensified by low water levels in rivers, or slowed down by the limits placed on the volumes withdrawn, and by the infiltration of the first effective rainfall at depth.

The 2021-2022 recharging period was short with little rainfall, leaving the aquifers in an unsatisfactory state at the end of winter. The situation deteriorated rapidly during the spring, owing to high demand for groundwater, and then more gradually over the summer.

The September rains were beneficial but with little effect on the aquifers and were not enough to make up for the delay accumulated in recent months. Levels are currently ranging from moderately low to very low locally in much of France, which is a cause for concern. The 2022 low-water situation appears to be particularly severe. The situation is satisfactory, with levels close to normal, in the south-west of the country, in Corsica, in the Vendée and in the centre of the Paris basin.

The state of the aquifers in October remains generally stable compared to September. The situation is improving in the few aquifers where the inflows (effective rainfall) have compensated for the outflows (river support and abstractions). As a result, the deep aquifer of the Roussillon plain and the Jurassic limestone aquifer in the south of the Vendée have returned to normal levels, thanks to the sharp reduction in abstractions in recent weeks.

The situation is positive in several aquifers, where levels are close to normal, compared to those recorded in September in previous years:

Many aquifers are in an unfavourable condition, with levels that are low or extremely low, compared to the mean of September levels observed in previous years:

The seasonal forecasts of Météo-France announce “hotter than normal temperatures” for the whole country. There is no preferred scenario for precipitation.

Autumn is generally a pivotal period, between the end of the summer depletion (falling levels) and the beginning of the winter recharge (rising levels). The reversal of trends will depend on rainfall infiltrating deeply, in other words on rainfall and vegetation dormancy, groundwater abstraction and aquifer inertia. It should be noted that rising or stable levels have already been recorded following the September rainfall, particularly in the reactive aquifers of southern and eastern France. Depletion also seems to have slowed down in many of France’s aquifers. The October rains, combined with the dormancy of vegetation, should confirm this upward trend.

Concerning reactive aquifers, recharge could become widespread during October in the areas receiving the most rainfall. This effective rainfall should recharge the aquifers. Thus, in the event of significant local rainfall, levels could quickly rise above monthly norms. If there is insufficient rainfall, trends are expected to be downward. The situation could then deteriorate and low-water levels would be particularly severe with low to very low levels in aquifers, below normal in September. Aquifer levels at the start of winter 2022-2023 will be significantly lower than last year.

For inertial aquifers, the October rainfall is not expected to generate significant recharge. Depletion should slow considerably if rainfall over the next few weeks is sufficient, but it is expected to continue until mid-October, November or even December for the most inert aquifers. This is because it can take several weeks and sometimes up to three months before effective rainfall leads to a rise in water levels. The situation is not expected to change much in October and should remain relatively similar to that of September. No improvement is expected before mid-autumn for the inertial aquifers.

The rains in September and the fall in abstractions alleviated the pressure on groundwater. However, this rainfall was largely insufficient to compensate for the deficits accumulated since the beginning of the year. The aquifer levels at the start of the 2022-2023 winter period are significantly lower than last year, with many varying between low and very low.

The only way of preserving the state of the aquifers, and thus maintaining continuity between groundwater and surface water to prepare for 2023, is to limit water abstraction. Water restriction orders help to relieve the pressure on water resources. Slowing down the discharge process avoids rapid deterioration of the aquifers and postpones the occurrence of severe low-water levels in rivers, given a lack of effective rainfall. At the beginning of the recharge period, it is also very important to allow time for the weakened water reserves to recover sustainably.

During the autumn, winter and early spring, it will be necessary to monitor the situation for all aquifers across the country, particularly those with severe low-water levels. The replenishment of groundwater reserves and the return to normal levels at the end of winter 2023 will only be possible if resources are abundantly recharged during autumn and winter. Note that spring rain will also postpone the start of the drainage period for the most reactive aquifers.