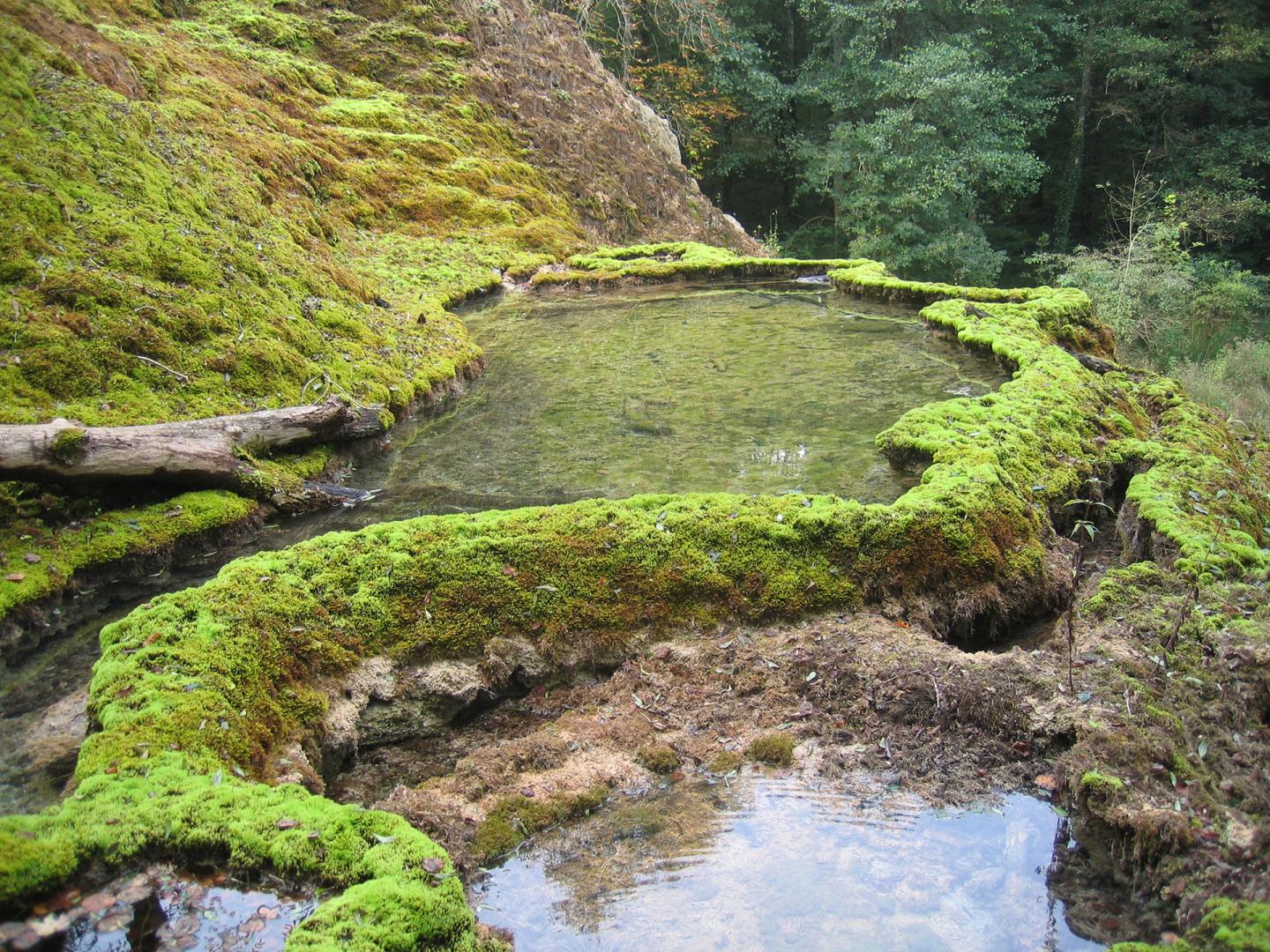 Share
The groundwater situation in December was satisfactory. There was nonetheless a slight deterioration during the autumn over a large part of northern France, due to low recharge. 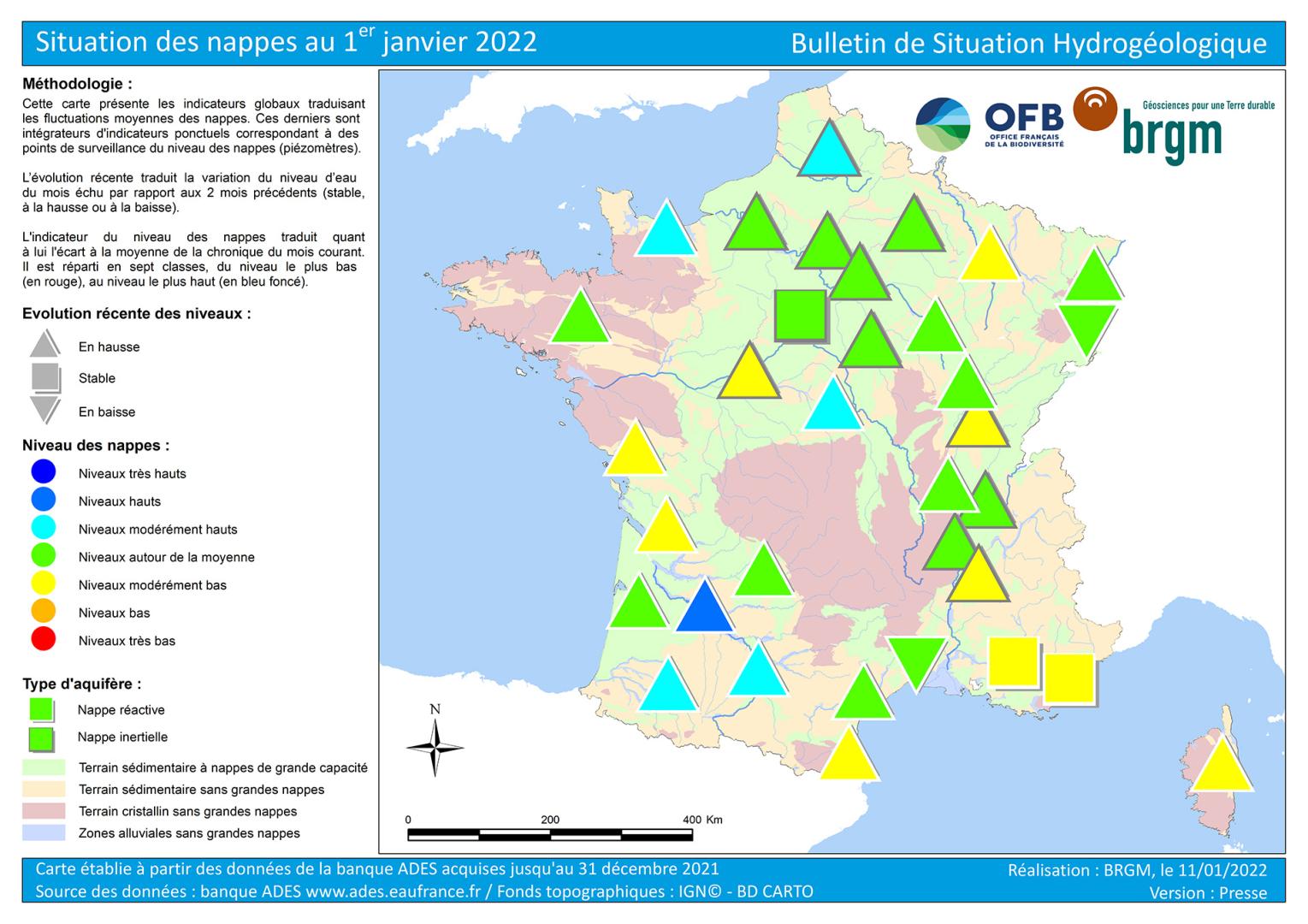 Map of groundwater tables in France on 1 January 2022.

Recharge began in all the aquifers across the country between October and December. In December 2021, most of the groundwater table levels were rising. The only areas that had falling or stable levels were those in which there was a lack of rainfall during December: southern Alsace, the regions around Montpellier and Nîmes, Provence, and the Côte d'Azur.

The situation in December was satisfactory, with levels close to monthly averages, from moderately low to high. There was nonetheless a slight deterioration during the autumn over a large part of northern France, due to low recharge.

The trends in January will essentially depend on the amount of rainfall. Recharge should continue if areas receive rainfall, meaning the situation should then improve. If there is insufficient rainfall, depletion could rapidly recommence, causing their situation to deteriorate. The groundwater situation in south-eastern France and in the northern part of the Aquitaine Basin needs to be closely monitored, in particular.

The recharge period started during October in south-east France. Due to the abundant rainfall, even the inertial Plio-Quaternary and Miocene aquifers in the Rhône-Saône corridor started recharging. During November, the recharge then started to occur in the reactive aquifers throughout the country, and finally in the inertial aquifers in the Paris Basin during December. In December, most of the groundwater levels were rising.

As regards the Artois-Picardy, Seine-Normandy and Loire-Brittany basins, the recharge began progressively between the end of October through to December 2021, depending on the inertia of the aquifers and local rainfall. The recharge of the inertial aquifers in the central Paris Basin was not particularly intense, meaning levels rose only slightly in December. The inertia of the Beauce limestone aquifer means the groundwater level reacts slowly: during December, the trend slowly started to reverse and the levels were generally stable. Concerning the reactive Jurassic-limestone aquifers in Côte-des-Bars, Berry, southern Vendée and Bessin, the Cenomanian sand aquifers in Maine and the Armorican Massif bedrock aquifers, the recharge has been underway since October and the levels were still rising in December. In these areas, heavy local rainfall caused significant reactions in the aquifers: notable rises in levels were observed in Berry and Bessin.

In the Rhine-Meuse basin, the recharge started late due to a lack of rainfall over the last few weeks. Consequently, the groundwater recharge in the Jurassic limestone aquifers of Lorraine and the alluvial aquifers of the Alsace plain to the north of Colmar only started at the end of November, i.e. about one month later than usual. In December, their levels were rising. The alluvial aquifer of the Alsace plain south of Colmar continued its discharge and levels were still falling.

In the Adour-Garonne basin, the trend began to reverse in October. In November, the recharge had generally begun across the area, even though it was not very intense. In December, levels rose due to a significant surplus in terms of the volume of the recharge.

In the Rhône-Mediterranean and Corsica basins, the recharge began in October and continued through November. The recharge of the aquifers in the Rhône-Saône corridor began in December and groundwater levels were generally on the rise. The levels of the reactive aquifers increased rapidly, while there was little change in the levels of the inertial aquifers. Finally, the groundwater trends around the Mediterranean coast and in Corsica were affected by the amount of local rainfall. Levels decreased or remained stable in the areas with little effective rainfall, while levels increased in the areas that received more abundant rainfall.

Situation in relation to December averages

In December, the groundwater situation was generally satisfactory, with moderately low to high levels.

The majority of the aquifers across France did not go through a particularly severe low-water period, apart from in the south. This favourable situation was due to the significant recharge in the winter of 2020-2021 and to the exceptional recharge episodes recorded in May and June, and again in July. In the northern half of the country, the groundwater situation deteriorated slightly between October, November and December, due to the low intensity of the recharge. From the Aquitaine Basin to the Rhône-Saône corridor – after a lower-than-normal recharge in November – the situation improved in December, due to a marked surplus of effective rainfall. The groundwater tables remained at satisfactory levels during December, from moderately low to high.

In the south, the situation remained delicate for most of the summer in the reactive aquifers along the Mediterranean coastline and in Corsica, and in the alluvial aquifers of the Adour and Gave du Pau rivers. Rainfall in September and October improved the situation in these aquifers. Groundwater levels are gradually returning to levels that are in line with the norm.

The situation is good in several aquifers, with moderately high to high levels in relation to the levels recorded in December in previous years:

Certain aquifers are in a less positive situation, with moderately low (or even low to very low levels, in some areas) compared to averages for December:

Given the episodes of rainfall and snowmelt during the first ten days of January 2022, the recharge should continue in all aquifers in January. Significant rises in water levels could occur in the most reactive aquifers, particularly in karstic limestone aquifers. The state of the aquifers should improve, notably in the areas benefiting from sustained recharge events.

Over the longer term, MétéoFrance's weather forecasts for January, February and March make no particular predictions concerning temperatures. As regards rainfall, a drier-than-normal situation seems most likely across France in the next few months. The trends over the winter period and the change in the groundwater situation will depend exclusively on the amount of rainfall (therefore the rainfall totals) and the inertia of the aquifers.

If the level of effective rainfall ranges from normal to surplus, the recharge should continue in the reactive and inertial aquifers. In this case, the situations should improve.

Where the rainfall is insufficient, depletion could resume in the aquifers concerned. The aquifers' situation will therefore deteriorate, particularly in the most reactive aquifers. The state of the aquifers in south-eastern France – made vulnerable by the fairly severe low-water period in the summer – as well as the limestone aquifers in the northern Aquitaine Basin will need to be monitored particularly closely.