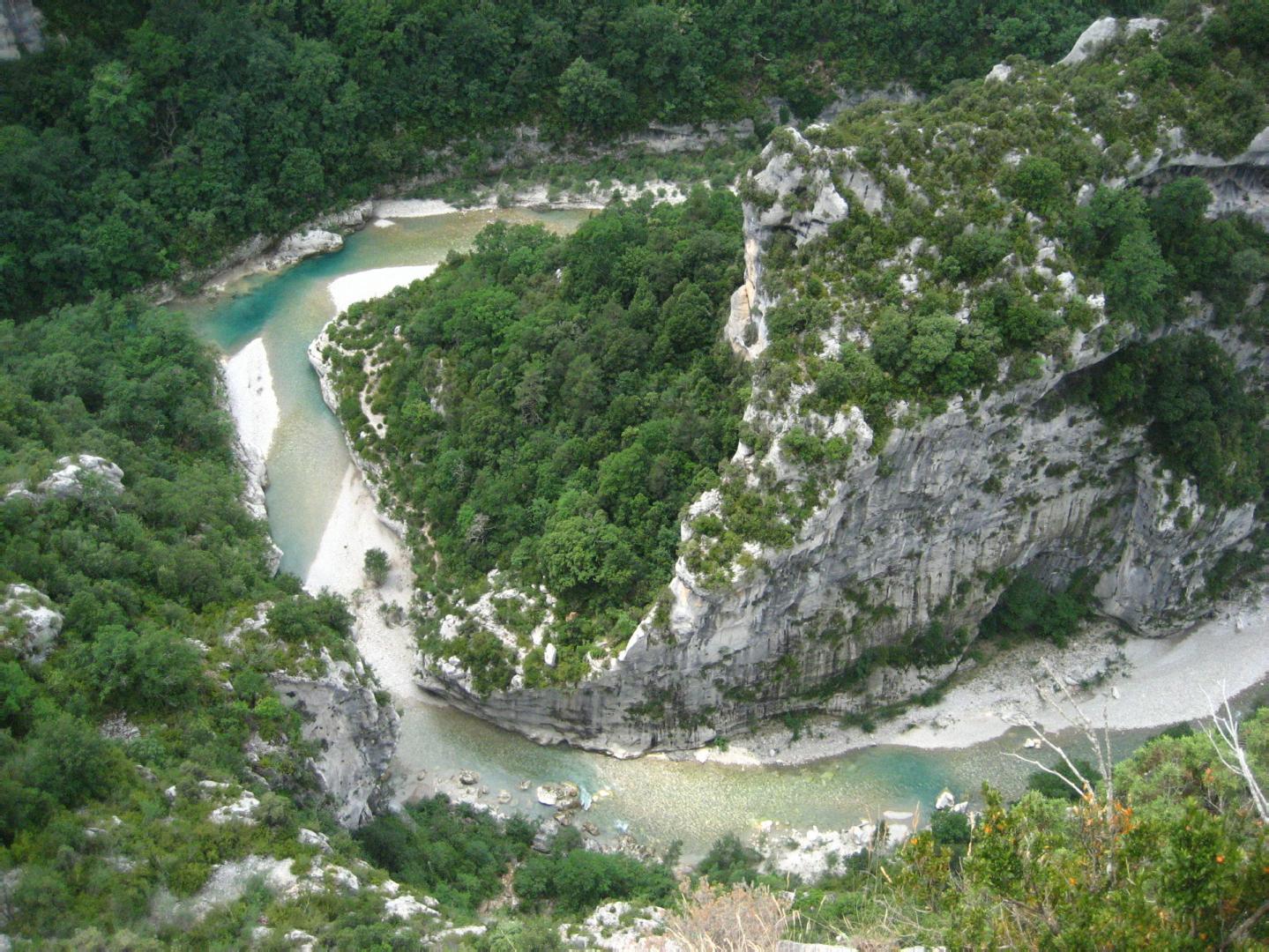 Share
The levels of the aquifers are on the whole satisfactory, but the general trend is downwards. The rainfall in May 2021 had little impact on aquifer levels. 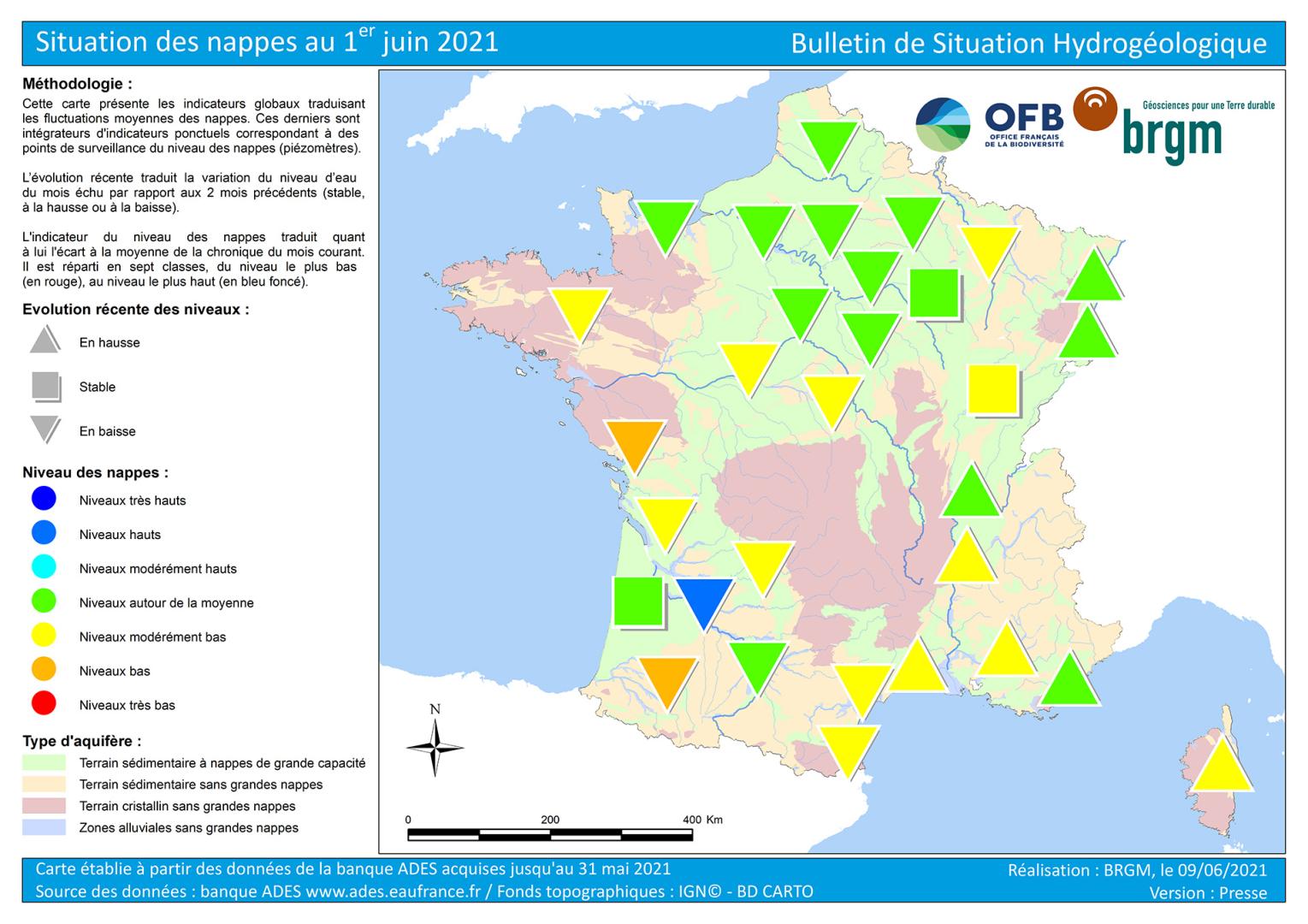 The hydrogeological situation on 1 June 2021

In May 2021, there was a downward trend for most of the aquifers. This is usual for this time of year. Any rain that manages to filter into the soil is absorbed by vegetation and rarely reaches the water table. The May rains only significantly affected the aquifers in the east of France, in Alsace and along the Mediterranean coastline.

The situation in May was generally satisfactory, with levels close to the monthly averages or moderately low. The situation was less favourable, with moderately low levels, over the south of the Vendée and the south of the Nouvelle-Aquitaine Regions. Recent recharge episodes have improved the state of reactive water tables in Alsace, Bourgogne-Franche-Comté, Auvergne-Rhône-Alpes and along the Mediterranean coastline.

The autumn and winter of 2020-2021 were characterised by strong groundwater recharge over a large part of France. This recharge was particularly exceptional in the Adour-Garonne river basin, but remained weak along the Mediterranean coast and did not occur at all in Provence and Côte d'Azur. The depletion period ended a little early, between February and April, and was followed by a dry early spring.

In May 2021, the rainfall had little impact on aquifer levels: the rain that infiltrated the ground mainly moistened it and was taken up by vegetation. Only a small part of it infiltrated deeper into the ground. Over a large area of the western part of the country, the aquifers continue to drain and levels are mostly still falling. The intensity of aquifer depletion has slowed down in some of the most rained-on sectors, which have aquifers that are responsive to precipitation (alluvial aquifers, Jurassic and Cretaceous limestone aquifers and aquifers over the basement of the Armorican Massif and the Massif Central).

Levels are only increasing in aquifers in the eastern third of France, and this is due to highly excessive rainfall. However, these rises were sudden and sporadic and levels started to drop again at the end of May. More specifically, these areas include Alsace, southern Lorraine, Bourgogne-Franche-Comté, Auvergne-Rhône-Alpes, Provence-Alpes-Côte-d'azur, the Montpellier and Nîmes regions and Corsica. It should be noted that the trends remain mixed for the Sundgau and Rhône-Saône water tables. Precipitation had a significant impact on the near-surface aquifers, but had less or even no impact on the deep and inertial aquifers. Along the Mediterranean rim, the trends were variable, depending on local rainfall: some sectors benefited from several episodes of recharging during the first fortnight of the month, while there was no increase in levels in other sectors.

Situation in relation to the May averages

In May 2021, the levels were generally close to the monthly average or moderately low. The situation of the aquifers has generally changed little since the previous month, with the inertial aquifers not being very sensitive to the meteorological phenomena of spring and summer and the rainfall in May having slowed down the depletion of the responsive aquifers.

The inertial water tables of the chalk and tertiary formations of the central Paris Basin and Artois-Picardy are not very sensitive to drought or summer rainfall. The situation remains stable for these aquifers with levels close to the monthly averages. The situation of the Jurassic limestone aquifers around the Paris Basin (Bessin, Berry, Côtes de Bars, Lorraine) is deteriorating slightly, despite a slowdown in the intensity of depletion, and levels are moderately low.

In the responsive aquifers of the Armorican Massif basement, levels are generally moderately low. The situations differ locally because they depend on the rainfall recharge in May.

In the Aquitaine Basin, the situation is varied. Since the spring drought followed a strong winter recharge which created a surplus, the situations deteriorated at different rates depending on the reactivity of the water tables. The benefits of last winter's abundant recharge are still being felt in the alluvial aquifers of the Garonne and its tributaries and in the Plio-quaternary aquifer. Conversely, levels are low to moderately low in the Jurassic and Cretaceous limestone aquifers and in the alluvial aquifers of the Adour and Gave de Pau rivers.

From Alsace to the Mediterranean, the excess rainfall had a beneficial impact on the water tables. Situations have improved but have not made up for the recharge deficits of recent months: the levels are generally close to monthly averages or moderately low. However, local situations can vary greatly. Thus, in the Rhône-Saône corridor, the levels are moderately high to high for the near-surface aquifers but remain low to very low for the deep aquifers. Along the Mediterranean rim, the state of the aquifers depends on the rainfall recorded locally.

Several aquifers are in a good state, with levels close to or above average compared to the months of May of previous years:

Some aquifers are in a less favourable state, with levels below the mean for all months of May, and thus require reinforced monitoring:

Météo-France forecasts that June, July and August will be warmer and drier than normal. There is likely to be a downward trend for all the aquifers.

Levels should remain close to monthly norms in the aquifers that have benefited from excess recharge. In the Paris Basin, the chalk limestone and tertiary aquifers should remain close to normal levels over the next few weeks. These aquifers are not very sensitive to summer drought, due to their high inertia. In the Aquitaine basin the benefits of last winter’s abundant recharge are still being felt in the alluvial aquifers of the Garonne and its tributaries and in the Plio-quaternary formation aquifer on the Atlantic coast.

Rainfall deficits at the end of winter and beginning of spring had a strong impact on aquifers that are sensitive to the lack of rainfall. In certain sectors, the rainfall could lead to an additional recharge episode, allowing the state of the groundwater to improve locally. However, this impact is temporary and the situation may deteriorate rapidly during the summer in the event of prolonged drought.

The Bourgogne-Franche-Comté and Auvergne-Rhône-Alpes aquifers have experienced several successive winters with a recharge deficit. The rainfall in May was not sufficient to make up for the lack of winter recharge. These aquifers may thus no longer play their role in mitigating low water levels for the upstream Loire, the Rhône and its tributaries.

On the Mediterranean coast, the alluvial, tertiary and karstic limestone aquifers of Roussillon, Languedoc, Provence and the Côte d’Azur benefited only from low winter recharge or none at all. The rains in May caused local flash floods which affected the aquifers. But these Cevennes episodes did not allow for an effective recharge of the aquifers, due to the violence of the rainfall and the induced runoff, nor did they sufficiently improve the situation. The state of these reactive aquifers will most likely deteriorate slowly over the next few weeks, and the situation could become difficult in some areas.