Share
Summary
The BRGM has agencies in all the administrative regions of mainland and overseas France, working to meet the needs of its regional partners and help them deal with specific local challenges. This article presents the activities undertaken by the BRGM's regional agency in Martinique.

The BRGM’s Martinique agency is in Fort-de-France, where it has an archive library which is open to the public and a store of necessary equipment to carry out its missions, such as piezometers, multi-parameter sensors, pumps, an electricity generator, GPS and seismic measurement stations. It employs about ten people who specialise in geology, natural risks (ground instability, coastal, seismic and volcanic risks), groundwater resources (quality and quantity), geothermal energy and soil pollution.

In the centre of the Caribbean

Lying in the central Caribbean area, which covers 2.7 million km² and has a population of 39 million, Martinique is a member of the Organisation of Eastern Caribbean States (OECS), CARICOM and the Association of Caribbean States, all of which work to strengthen regional cooperation and to promote sustainable forms of development.

Martinique is the largest volcanic island in the Lesser Antilles archipelago and one of the world's 34 biodiversity hotspots. Covering 1 080 km2, the island is exposed to numerous natural risks: earthquakes and tsunamis, volcanic eruptions, tropical cyclones, coastal erosion and landslides.

It has 34 municipalities with a total population of 377 000 and is France's fourth most densely populated region (340/km2).

Martinique’s economic and planning goals are set out its regional plan for economic development, innovation and internationalisation (SRDEII), its regional planning scheme (SAR) and its spatial planning and water management masterplan (SDAGE). To support the development of these planning tools, the BRGM, which has been active in Martinique for over fifty years, contributes its expert knowledge based on very large quantities of data on geology, hydrogeology, natural risks or geothermal energy.

Working with public and private partners

The BRGM also works with private companies on an ad hoc basis to develop Research, Development and Innovation methodologies to support their various fields of activity. 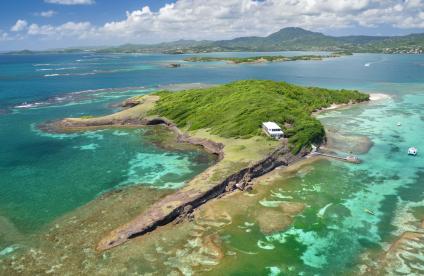 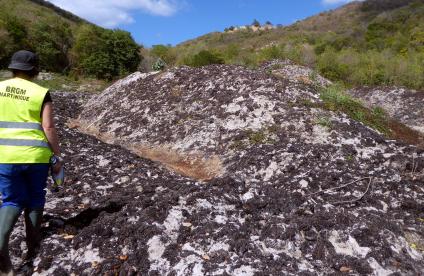 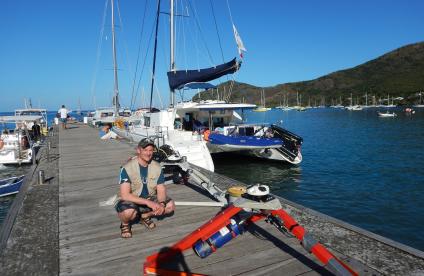 Reference, completed project
HYDROSEDMAR: improving understanding of the hydro-sedimentary processes of the Bay of Fort-de-France 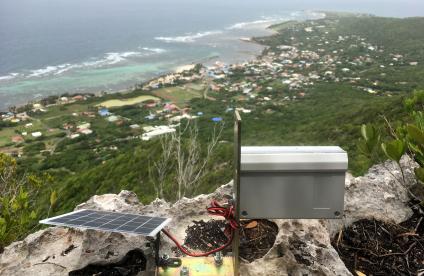 Reference, completed project
Use of remote cameras to monitor Sargassum seaweed washing up on beaches and coastline dynamics in the French Caribbean
Saint-Joseph
Public Outreach Meeting
Opening BRGM to society in Martinique (2018)
All the news in the region

Like all the volcanic islands around the Lesser Antilles Arc, Martinique is exposed to multiple risks. Due to its position along the subduction zone between the Atlantic and Caribbean plates, the island is vulnerable to volcanic, seismic and tsunami hazards.

Of all French regions, Martinique, together with Guadeloupe, is the most exposed to seismic risks.

Its mountainous relief is a cause of major landslides, with over 500 of these events recorded since the 1980s.  Some produce very significant impacts by damaging infrastructure such as road networks, bridges and tunnels and water and electricity supply networks.

Because of their exposure to cyclone swells and tropical storm surges, as well as rising sea levels due to climate change, Martinique’s coastlines are vulnerable to coastal flooding and erosion that can seriously damage its natural coastal environments and infrastructure.

The BRGM works closely with central and local government services, providing advice, expertise and post-event feedback on natural risks. It conducts studies to improve knowledge on the different hazards that arise from climate change and the island's geodynamic context.

Addressing phenomena such as ground instability, liquefaction and coastline retreat, the BRGM develops methodologies to characterise and produce maps of each hazard, which are used for spatial planning purposes and especially to update plans for natural and seismic risk prevention.

The BRGM is continually acquiring more data and compiling information on events into databanks, while installing  innovative instruments for multiannual monitoring of major landslides (Morne Macroix in Sainte-Marie, Morne Calebasse in Fort-de-France) to specify their hydrogeological functioning and identify triggering factors.

For seismic risks, the BRGM contributes to the development of prevention planning documents (microzoning, awareness campaigns) and the introduction of innovative participatory science approaches.

It conducts crisis management  activities (RICHTER earthquake simulation exercises; CARIBWAVE for tsunami risk prevention) and supplies government services with its knowledge to on the impacts they need to anticipate (e.g. simulations of damage to buildings).

In 2017, the BRGM completed a project to determine the impacts of coastal flooding by tsunamis, by mapping the extent of floodwaters on land and their height.

To support the development of a rational coastline management strategy for Martinique, the BRGM conducted several studies to characterise the evolution of its coastlines over several decades (1951 to 2010) and one decade (2004 to 2010), to show where the coastline is retreating, advancing or stable. It then mapped the different sedimentation cells where the action of ocean swells and currents causes sediment exchanges. In 2017, the BRGM installed the first measurement network for monitoring coastline mobility on several beaches of particular concern, to show their sediment dynamics over the course of a year. Another study was conducted in parallel on the coastline dynamics of the Montagne Pelée.

Finally, the HydroSedMar project, conducted as part of the Fort-de-France Bay contract, is acquiring data on waves, sea-level and currents to build up a digital hydro-sedimentary model of the bay.

Martinique is currently dependent on imported fossil fuels for 93% of its primary energy consumption. Martinique's multiannual energy programme (PPE) is being developed as the energy component of the Regional Climate-Air-Energy Plan. The aim is to achieve energy independence by 2030, with an intermediate target of 55% renewable energy by 2023, including 40 MW from geothermal energy.

A major task is to characterise high- and low-temperature geothermal potential in Martinique and neighbouring islands, with a view to an interconnected grid.

The BRGM has conducted several campaigns to explore high-temperature geothermal potential in Martinique. Two sectors have been selected where indications show potential but as yet unproven resources: a source of heat (with an estimated temperature of 800°C) at a depth of around 5km below the Montagne Pelée, and at least two reservoirs at depths of 2 km and more below its western flank, with temperatures ranging from 155 to 200°C.

Geothermal activity is also indicated in the Anses-d’Arlet municipality, at Petite-Anse, where the heat source is a magmatic body rising to less than 1 km from the surface and adjacent to a reservoir with estimated temperatures of 190 to 210°C.

Explorations of low-temperature geothermal potential (for producing cold and for other direct uses of geothermal heat) on the Lamentin plain have brought a better understanding of the structure of the low-temperature (90°C) geothermal system and identified several targets.

The next important step will be to organise exploratory drilling in order to reconnoitre and assess the productivity of this reservoir. This will be a decisive step towards defining and quantifying the contribution of geothermal energy in Martinique’s future energy mix.

In Martinique, water resources are abundant but unevenly distributed. BRGM monitors its quantity and quality and conducts research to better understand this resource.

Martinique has abundant water resources but they are not evenly distributed. Rainfall is seasonal, with a dry season from January to June and a rainy season from July to December. It is most abundant in the north of the island (5 000 to 7 000 mm),  but much less so in the south (maximum 1 500 to 2 000 mm).

90% of drinking water is taken from rivers, in five catchment basins. Consequently, although water is not scarce, the situation becomes critical during dry periods when water abstraction dries out certain rivers.

Parallel BRGM studies are geared to furthering knowledge on the functioning of volcanic aquifers and prospecting for groundwater via geological, hydrogeological and geophysical survey campaigns and reconnaissance drilling.

Finally, under the spatial planning and water management masterplan (SDAGE), the BRGM is currently conducting a study to define usable volumes of surface and groundwater across Martinique as a whole, the ultimate aim being to ensure a more even distribution of water abstraction and reduce impacts on currently overexploited sectors.

Waste recycling is a major problem in island environments. Industrial activities past and present, as well as contamination by pesticides used in the past, such as chlordecone, are sources of risk to the quality of natural environments.

Waste recycling is a major problem in island environments and requires innovative solutions based on a circular economy.

Industrial activities past and present are also a source of risk to the quality of natural environments.

Finally, contamination by pesticides used in the past, such as chlordecone in banana plantations, is still significantly affecting the environment and the soil-groundwater-river-sea continuum. Because these pesticide substances persist in the environment, understanding their transfer mechanisms is of major importance. Managing these pesticide-polluted soils is a national priority, implemented in particular through the “Chlordecone Plan”.

A banana plantation in the Lamentin municipality.

Chlordecone was used from1972 to 1993 against infestations of the banana weevil.  Use of this molecule was banned in 1993 but it is highly persistent and continues to pollute soils, rivers, groundwater and all the ecosystems associated with them.

In the last ten years, the BRGM, in partnership with the Directorate for Food, Agriculture and Forests, has been collecting and compiling all relevant data into a Geographic Information System (GIS) in order to provide a representation of soil contamination levels on the regional scale. The database already contains nearly 11000 soil sample analyses. This mapping exercise focuses essentially on agricultural zones.

Some 800 analyses are currently under way under the ALUR Act (2014 Act on housing and urban renovation) and the National Chlordecone Plan III, in order to map soil contamination in periurban zones so that people occupying urban land parcels can safely undertake gardening or cultivation.

Working with the OPALE observatory on agricultural pollution in the Caribbean, the BRGM, under a partnership with the CIRAD, INRA and IRD, has undertaken groundwater monitoring in the catchment basin of the river Galion. The Chalvet observatory, on the flank of the Montagne Pelée, is conducting detailed monitoring (in partnership with the ODE) of the impacts of agricultural pollution on groundwater quality in this severely affected zone in a particular hydrogeological context.

Improving geological knowledge is the bedrock on which all BRGM projects are built.

Compiling a full set of baseline data is an essential requirement for all research work and its potential applications in mineral resources (quarries), geothermal energy, the natural geological heritage, risks (ground instability, earthquakes) and groundwater.

Basalt columns in the Miocene complex on the Caravelle peninsula (Trinité municipality).

A recent airborne geophysical survey (MARTEM), covering the whole of Martinique, supplied the necessary data to build up data infrastructure for the region, which is key to a better understanding of the structure of these islands down to 200 metres below the surface.

These data will be used to identify potentially mineral-rich zones, to map saltwater intrusions and the extent of aquifers and to identify zones vulnerable to ground instability. .

With a general readership in mind, the BRGM has also published a guide to the "Geological Curiosities of Martinique" and a geological map of the island.

All reported drilling data for Martinique are also available to the public on the infoterre.brgm.fr website.

Finally, during France’s nationwide Science Festival, field excursions are organised  for people to find out about professions in geology and the specific geological features of Martinique.