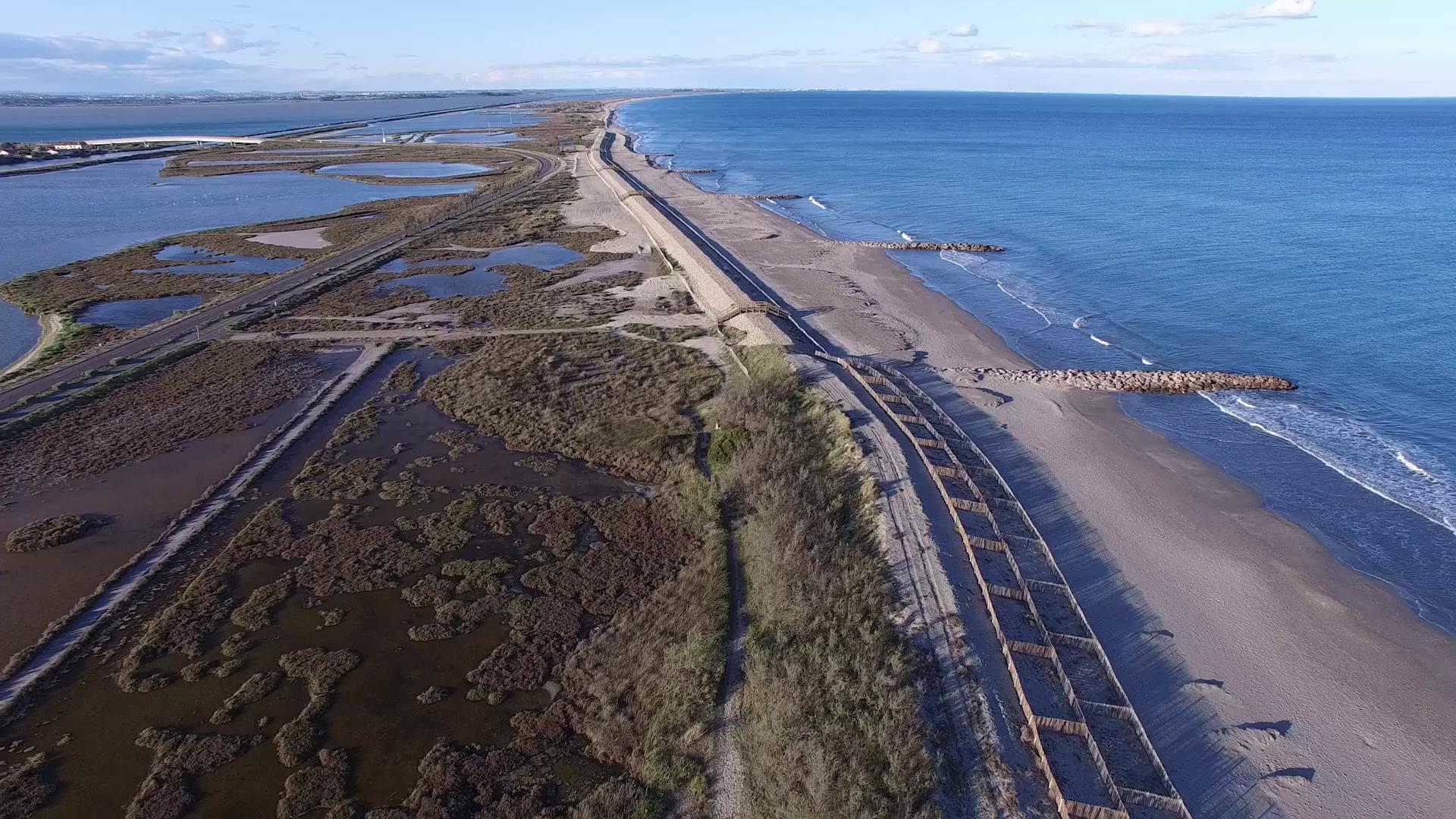 Share
The Occitanie coastline is made up of low-lying plains that are particularly exposed to the risk of coastal erosion and flooding. During storm events, this stretch of coastline – which is approximately 220km long – is subject to storm surges that cause flooding. It also undergoes significant morphological changes, ranging from a moderate retreat of the coastline to breaches in the dune system, which can aggravate flooding. 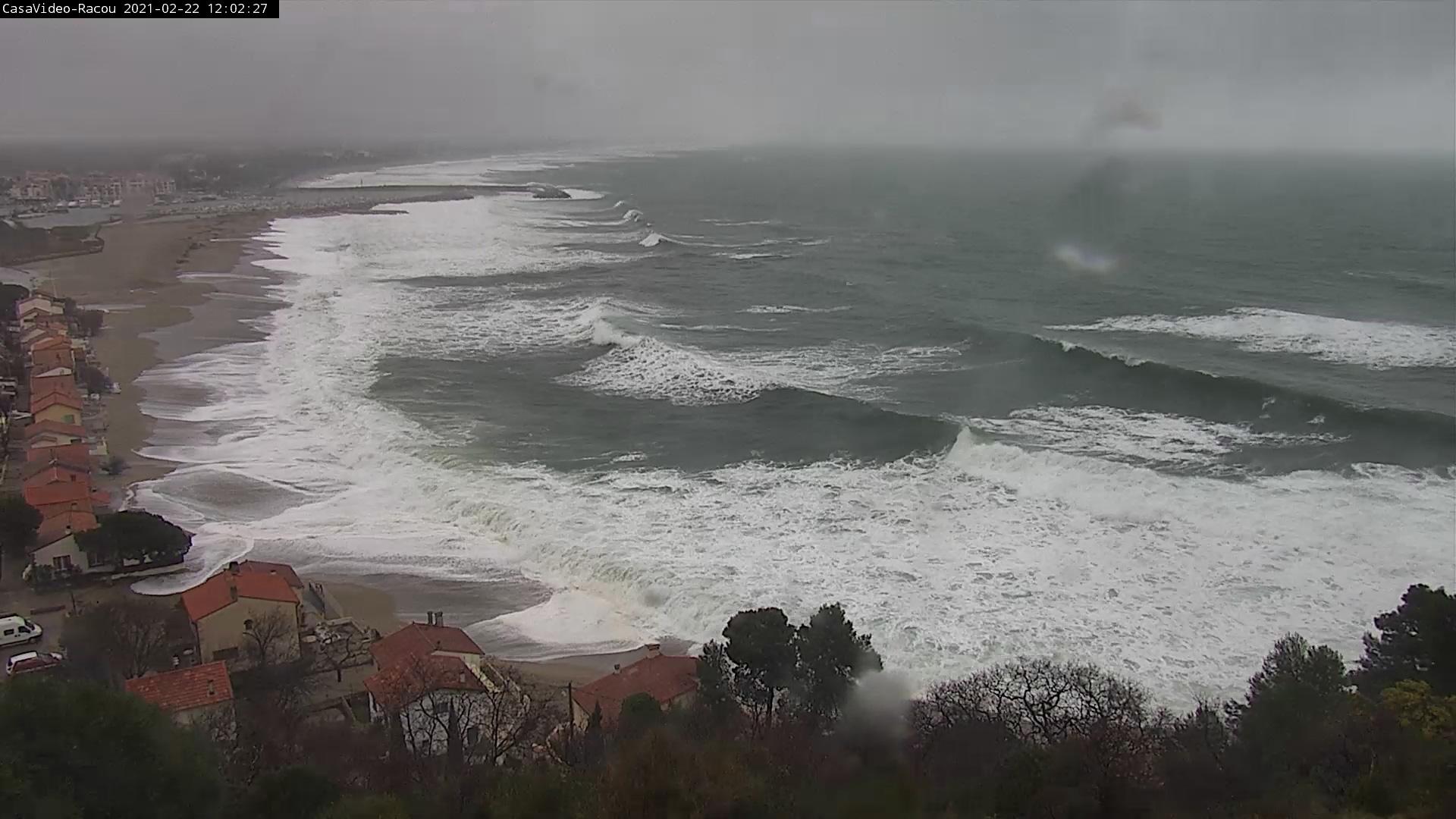 Coastal flooding in Argelès-sur-Mer (Pyrénées-Orientales) during the storm of 22 February 2021.

Although the phenomenon of coastal flooding is well known, the role of coastal erosion caused by weather events is a topic that has not been particularly addressed in studies. Consequently, analyses of a coastline's vulnerability to coastal flooding rarely takes into account the potentially exacerbating effect of phenomena such as overtopping and breaches, or a dune system's capacity to resist these phenomena. Almost all flood forecasting tools simulate floods over a fixed seabed, which does not change over time, and therefore potentially underestimate the risk during storms.

In this context, the Prefecture of the Occitanie region asked BRGM to carry out a study aimed at improving knowledge of the effects of event-related erosion on coastal flooding. The remit included producing tools to raise awareness of these phenomena, by identifying the areas concerned by these aggravating effects and demonstrating the impact of such effects on two pilot sites: Frontignan-Plage and Canet-en-Roussillon.

In order to analyse the increased risk of coastal erosion, a method was designed to assess the vulnerability of dune systems on a regional level, based on a sector-by-sector breakdown taken from the Regional Strategy for the Management of the Coastline established by the DREAL Occitanie. In order to identify the vulnerability level of the dune systems, a classification and aggregation analysis was carried out. Four main factors were taken into account and combined to draw up an overall vulnerability index: geomorphological resilience, status of the vegetation, anthropogenic influence and marine influence. The analysis of the 81 sectors concerned enabled us to define two main groups of coastline categories, spread in random fashion along the regional coastline. In addition to identifying the sectors that are most vulnerable to these phenomena, the analyses showed that 35% of the coastline systems are highly vulnerable overall, on a regional level.

Among the vulnerable sectors identified, two sites were selected to numerically simulate the phenomena during a hypothetical event likely to occur only every 50 years: Frontignan-Plage and Canet-en-Roussillon. The numerical method chosen to analyse the effect of erosion on the extent of coastal flooding in these two focus sectors was based the Xbeach morphodynamic 2D-H model, calibrated beforehand according to historical events for which data were available: Storm Gloria (January 2020) for Canet-en-Roussillon, and the October 2016 storm for Frontignan-Plage.

The results of the simulations of the hypothetical event highlighted the significance of the erosion phenomena on the level of coastal flooding. Strong morphological changes were simulated (erosion of the dune front, formation of breaches), which exacerbated the coastal flooding due to sheets of seawater overtopping at the two study sites. These morphological changes resulted in double the surface area being flooded in the Frontignan-Plage sector and in more rapid flooding at the beginning of a storm. For the Sardinal beach, to the north of Canet-en-Roussillon, where the Têt River flows into the sea, the area subject to flooding can be multiplied by a factor of 7 to 8. 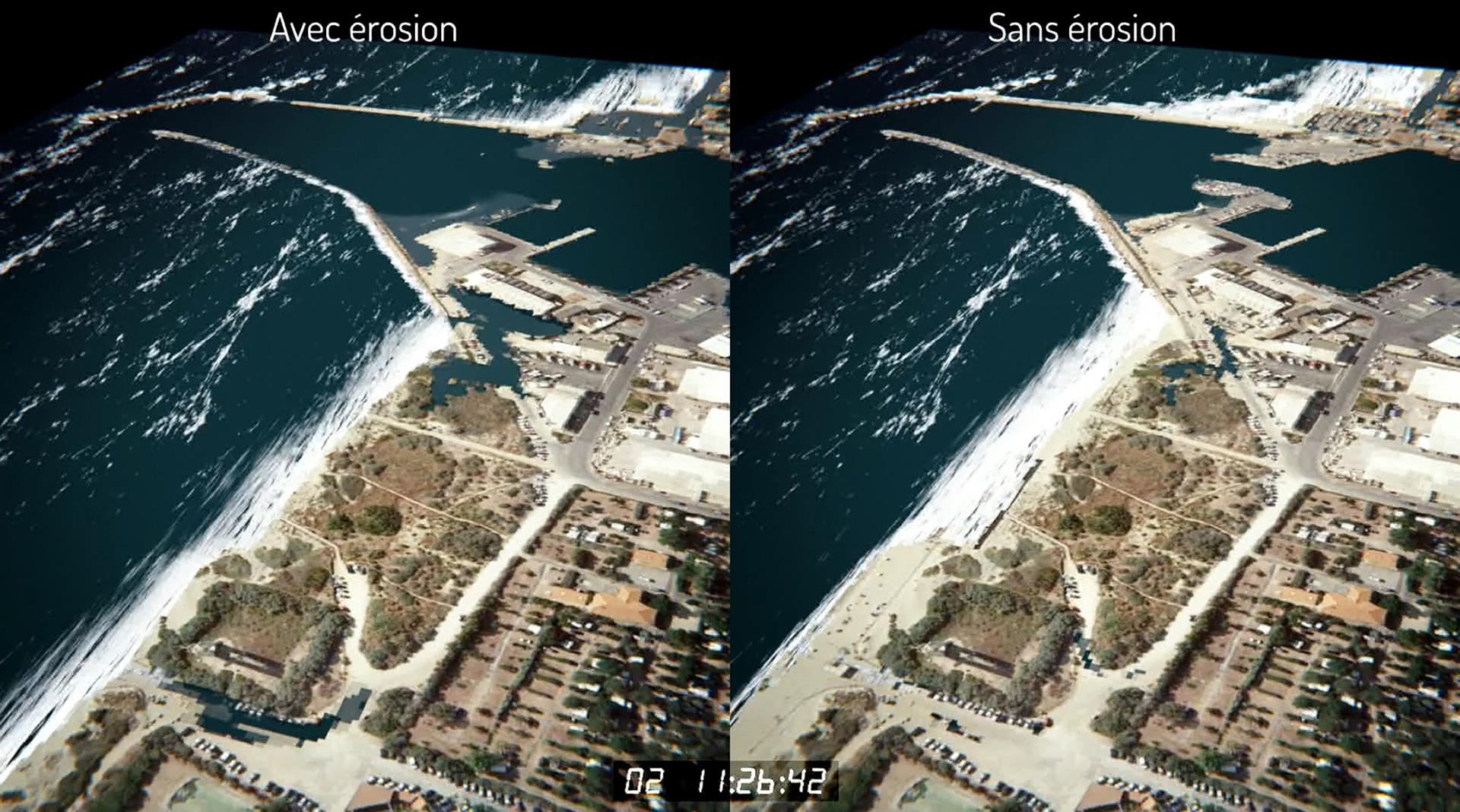 Simulation showing the increase in the surface area subject to flooding due to coastal erosion (picture on the left) in Canet-en-Roussillon.

The results of this study will contribute to the development of methods for managing the risks of coastal flooding during storms, by taking into account the aggravating effect of erosion in the sectors identified as being particularly vulnerable to these phenomena. In addition, the simulator that was developed also aims to raise the awareness of elected representatives and decision-makers by demonstrating these aggravating effects through 3D visual representations of coastal flooding (with and without the effects of erosion) on the two pilot sites.