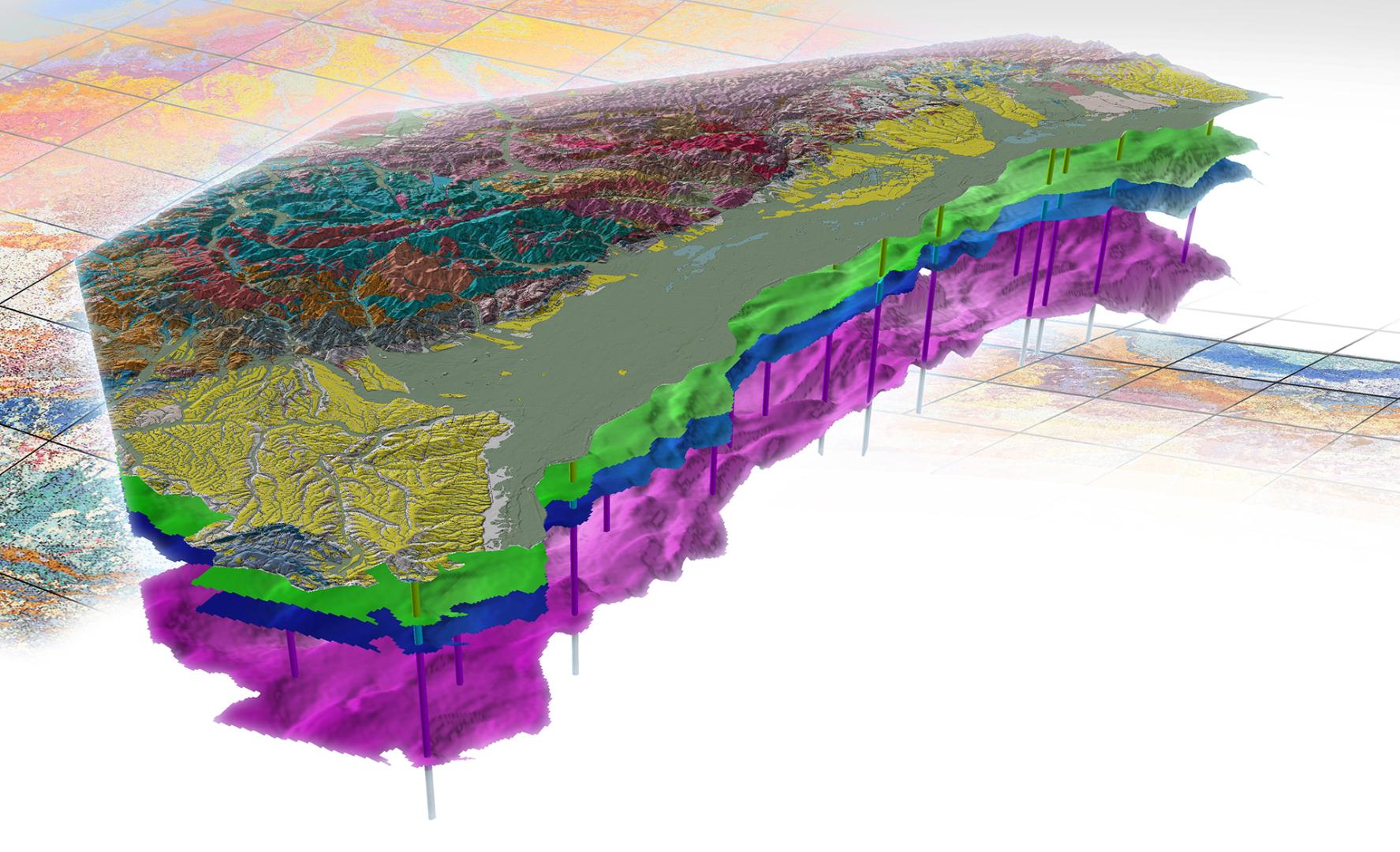 GeORG: An assessment of deep geological potential in the Upper Rhine Graben

Share
The transboundary GeORG project aimed to establish the geological profile at great depths of the Upper Rhine Graben, for applications such as geothermal energy extraction, CO2 sequestration and gas storage. In particular, the GeORG project confirmed and specified the area's geothermal potential.

The GeORG project: Deep geological potential of the Rhine Graben

After 4 years of cross-border cooperation, the GeORG project produced the first 3D geological model of the Upper Rhine Graben.

The aim was to identify the area's deep geological potential in order to inform, orient and guide public and industrial policies in the field of deep geothermal energy and geological storage.

The Upper Rhine Graben: home to millions, an impressive landscape with varied architecture, and not just in places visible to the naked eye. Indeed, the Upper Rhine Graben's subsoil abounds in geological resources. It contains for instance the largest drinking water resource in central Europe.

In the Roman era, thermal and mineral water were extracted from hundreds of metres underground. Other resources, such as salt, were also extracted. Oil holds an equally important place, with many boreholes and facilities deep underground for oil production and research. But there are other geopotentials which are currently underutilised.

To develop them, the trans-border GeORG project was initiated between Mainz and Basel. The acronym GeORG stands for Deep Geological Potential of the Upper Rhine Graben. Over 4 years, specialists from France, Germany and Switzerland established a common geoscientific database, supported by the European Union in the framework of the Interreg IV Upper Rhine Project. The project allowed for the compilation and harmonisation of thousands of geological statistics from drilling and geophysical measurements.

The enormous amount of data and the complex geological structure of the Upper Rhine Graben were the biggest challenges of project. GeORG and we were able to meet our objectives thanks to modern computing techniques and a team of skilled experts and scientists.

Based on this data, a complex 3-D geological model of the Graben's subsoil was created. The model reached a depth of 7km. It provided a picture of the geological strata and their temperature range. In the cities of Basel, Strasbourg and the Haut-Rhin Department, real-world projects were established based on the project's results.

The importance of the subsoil as a space for infrastructure is growing. This regards materials for building and communications, underground storage and networks for energy, telecommunications and water. Such uses can be complementary, competitive or mutually exclusive. The GeORG project's 3-D geological model is also a planning tool which can contribute to the management of the subsoil by including the development of solutions adapted to the problems encountered. In this way, in Basel, solutions were found for the planning of northern and eastern roads. GeORG thus provided the basis for sustainable subsoil planning.

The urban community of Strasbourg launched in 2009 its Territorial Climate Plan. Objectives: 3 x 30. 30% lower energy consumption, 30% fewer greenhouse gases and city-wide coverage of 30% or more renewable and reclaimed energy. The city of Strasbourg, like the rest of the Upper Rhine Graben, has a strong geothermal gradient: more than 50 degrees per kilometre. The 3-D model developed as part of the GeORG Project allowed us to determine its geothermal potentials and to inform our industrial partners. The purpose of the BRGM study is to establish the availability of deep geothermals. That information is integrated into our strategy for energy migration, which includes our public-heating networks.

Geothermals play an important role in the present debate on energy transition, in which the GeORG project provides useful information, helping to answer questions about the sustainable use of resources.

The results obtained by the GeORG project are extremely useful in the development of geothermal heating. Knowledge of the nature of subterranean rocks, temperatures and the water table are decisive factors in the realisation of such geothermal projects. With the GeORG project, we wanted to contribute to the future creation of projects like the one at Insheim.

Thanks to GeORG, the Upper Rhine Graben's trans-border geopotentials can be better evaluated, and the harmonised data will continue to contribute to international cooperation.

The GeORG project is the perfect example of successful trans-border cooperation. Knowledge and experience were networked and used in an optimal way. Thus with the GeORG project, a database of geological information was created for the entire region. This tool will help in meeting the challenge of energy transition and contribute to the sustainable management of the Upper Rhine Graben's underground resources.

Underground resources exist in abundance. Their exploration is a challenge. GeORG's trans-border information database is a modern tool that will help us meet that challenge. I'm delighted that the transnational group of partners has been able to come this far. Without the support of the EU, we could not have progressed as rapidly. The information database is designed to be updated, and our intention is to continue to develop our geological knowledge of the Upper Rhine Graben's subsoil.

The results obtained by GeORG are not intended only for specialists. The information is available to everyone on the GeORG website. Visit GeORG at www.geopotenziale.eu.

GeORG, a 5-year Interreg project drawing on the competences of the German geological surveys for Baden- Württemberg (LRGB) and Rhine-Palatinate (LGB), the University of Basle and the BRGM, was completed in March 2013.

The aims of the project were to harmonise the data from all partners and to model the geological structure of the Rhine Graben in three dimensions down to several kilometres in depth, in order to assess possibilities for using its deep underground resources in the context of climate change and the energy transition. Because this was a transboundary project, political boundaries were not an issue: we were able to investigate the geological object as a whole, with all partners contributing their own experience in their sphere of excellence. 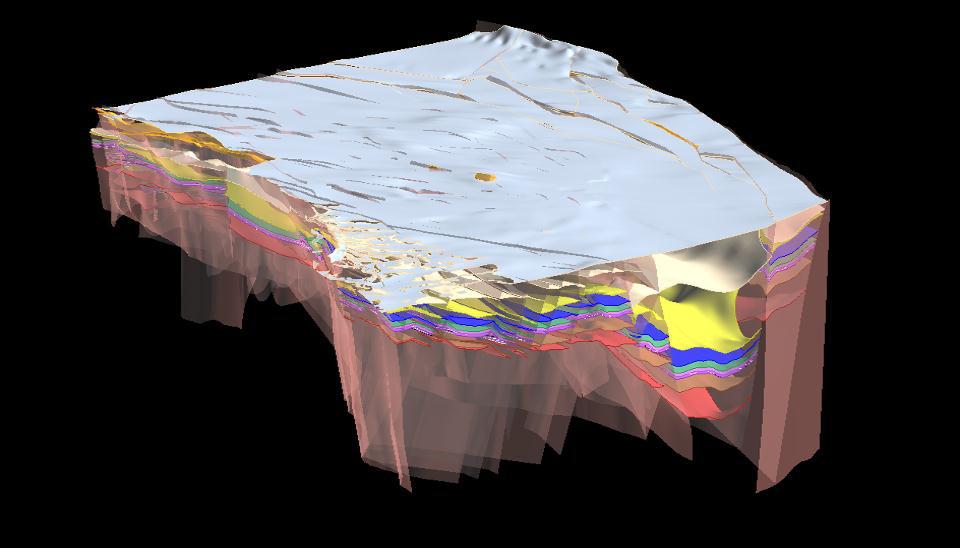 A 3D model of the Rhine Graben

To what extent can geothermal energy contribute to electricity production in the future and what are the most favourable zones? Is it possible to consider storing energy from renewable sources such as gas? Do geological formations exist that are favourable to CO2 sequestration? These are the questions that the researchers from all 3 countries attempted to answer, starting with the harmonisation of large quantities of data from disparate sources.

The BRGM, thanks to its studies at its pilot geothermal power plant at Soultzsous- Forêt in the Bas-Rhin département, already had a large amount of data on heat anomalies between 500 and 800 m in depth. These data were used during the first phase of the work programme, in which we collected all existing geological information, in particular from seismic reflection profiles, oil wells, boreholes 100 metres in depth and more, and of course the substantial bibliography on the subject.

This information, after harmonisation with the data from Switzerland and Germany, forms the basis for a 3D geological model the Upper Rhine Graben, which is now supplying information on the geopotential of the zone thanks to associated borehole data on temperature, porosity and permeability. 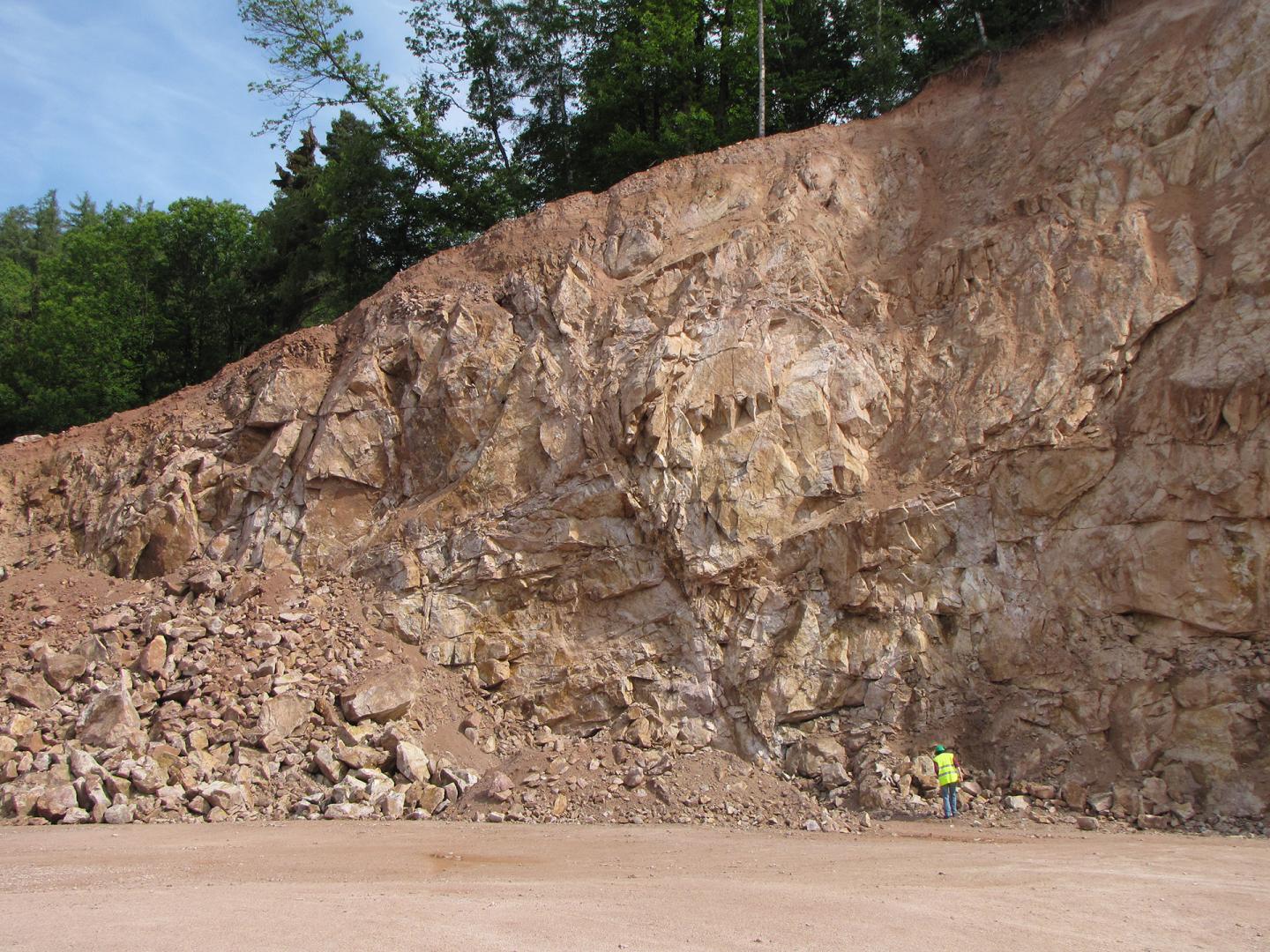 This is the first time that an overall three-dimensional view of the upper Rhine Graben has been produced. Thanks to the model, we were able to determine zones that were more favourable than others in terms of our objectives. About a hundred interactive maps were produced, for as many geological horizons. These show potential, at different depths, for geothermal applications, gas storage from renewable energy sources and storage of CO2. These maps can be used as a basis to plan future investments in energy development, particularly geothermal energy, which - as our studies have shown - has significant potential.