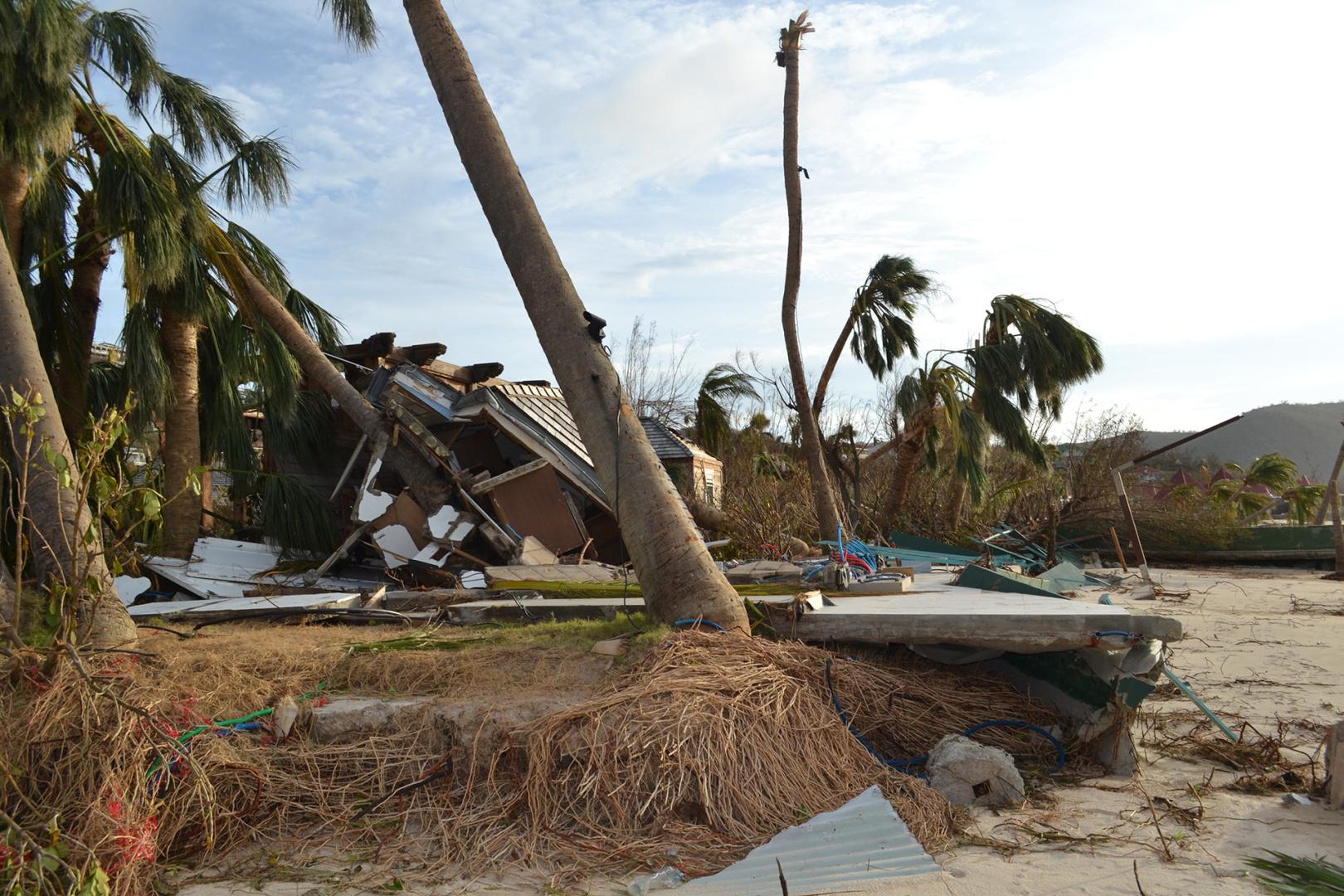 Share
On 4 September 2017, after preliminary discussions on 1 September, the Guadeloupe Prefecture and sub-Prefecture for the Nord and Saint-Martin islands made a formal request for BRGM assistance.

The BRGM’s assistance was required for the definition of zones most exposed to coastal erosion, storm surges and coastal flooding, to help define a strategy for information and preventive evacuation of the populations concerned.

The BRGM rapidly provided operational recommendations, including indications, based on existing hazard zoning, of the coastal and inland urban sectors lying in Hurricane Irma's path that would be most severely affected.

In parallel, the BRGM conducted an expert study in Orléans by modelling probable coastal flooding in Guadeloupe, for which sufficient topographic and bathymetric data are available as well as a model calibrated to previous hurricanes (1928, Dean in 2007 and Omar in 2008). However, no such data, which are necessary to produce models of sufficient resolution to assess risks in detail, were available for the Nord islands. The expert study here was therefore limited to a low-resolution assessment of coastal effects based on sea-level status in the open sea.

Damage due to hurricanes Irma and José

The hurricane season is far from over and post-Irma crisis management is still ongoing in the Caribbean. The BRGM therefore remains on stand-by to meet requests from the public authorities. 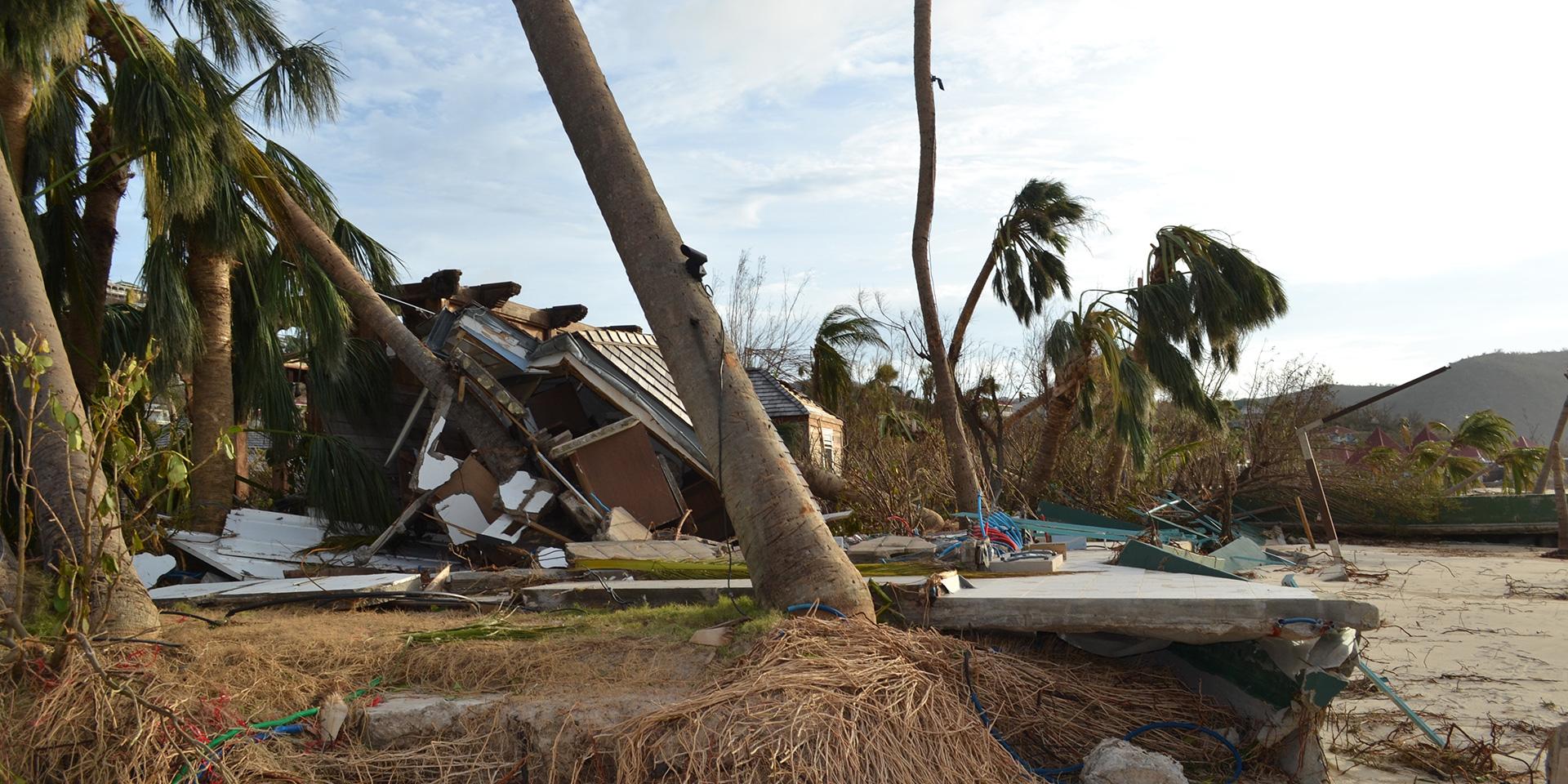 The Bay of Saint Jean on Saint-Barthélemy on 7 September, after Irma and before José. 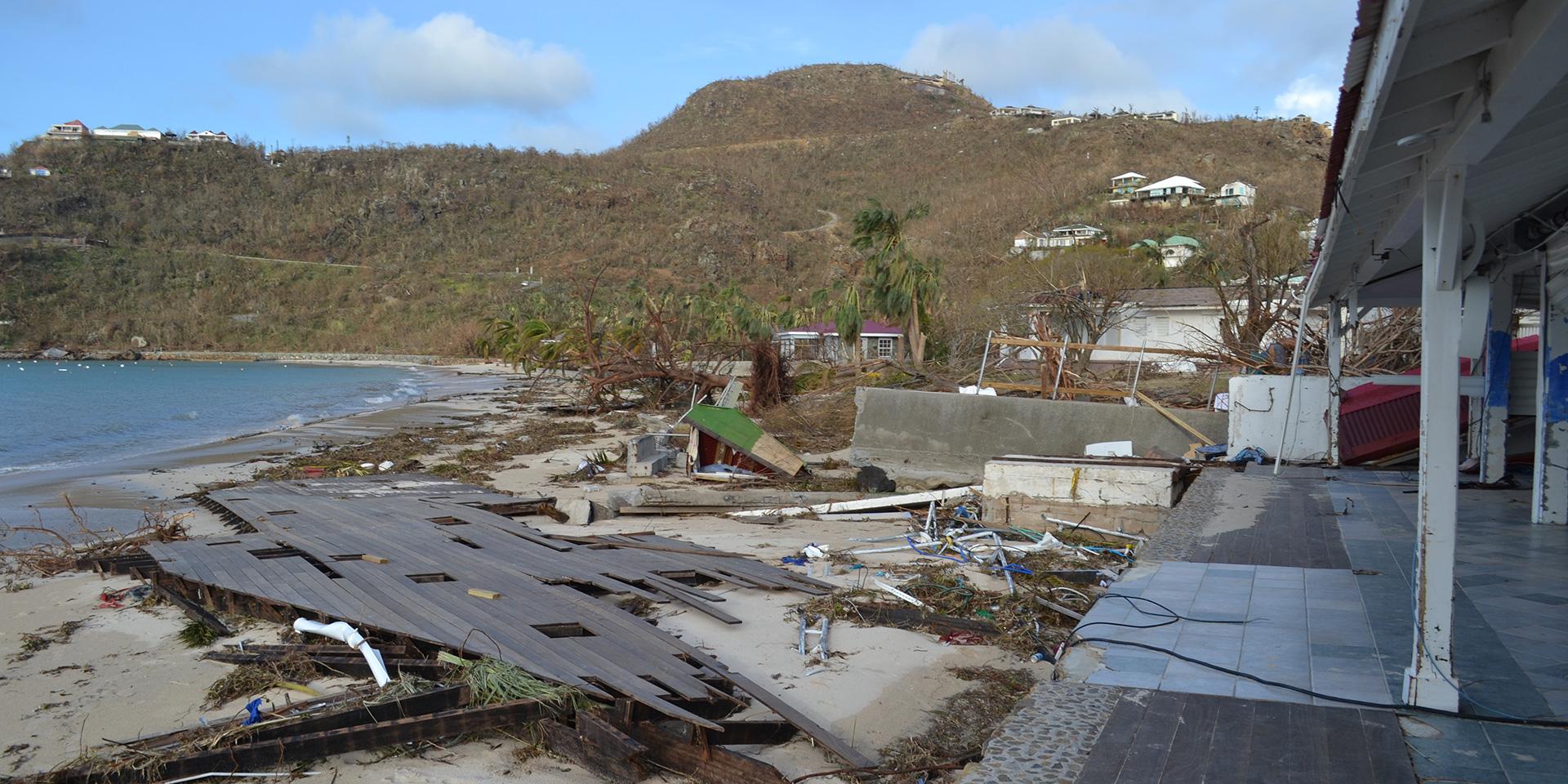 The Orléans neighbourhood on Saint-Martin, 13 September. 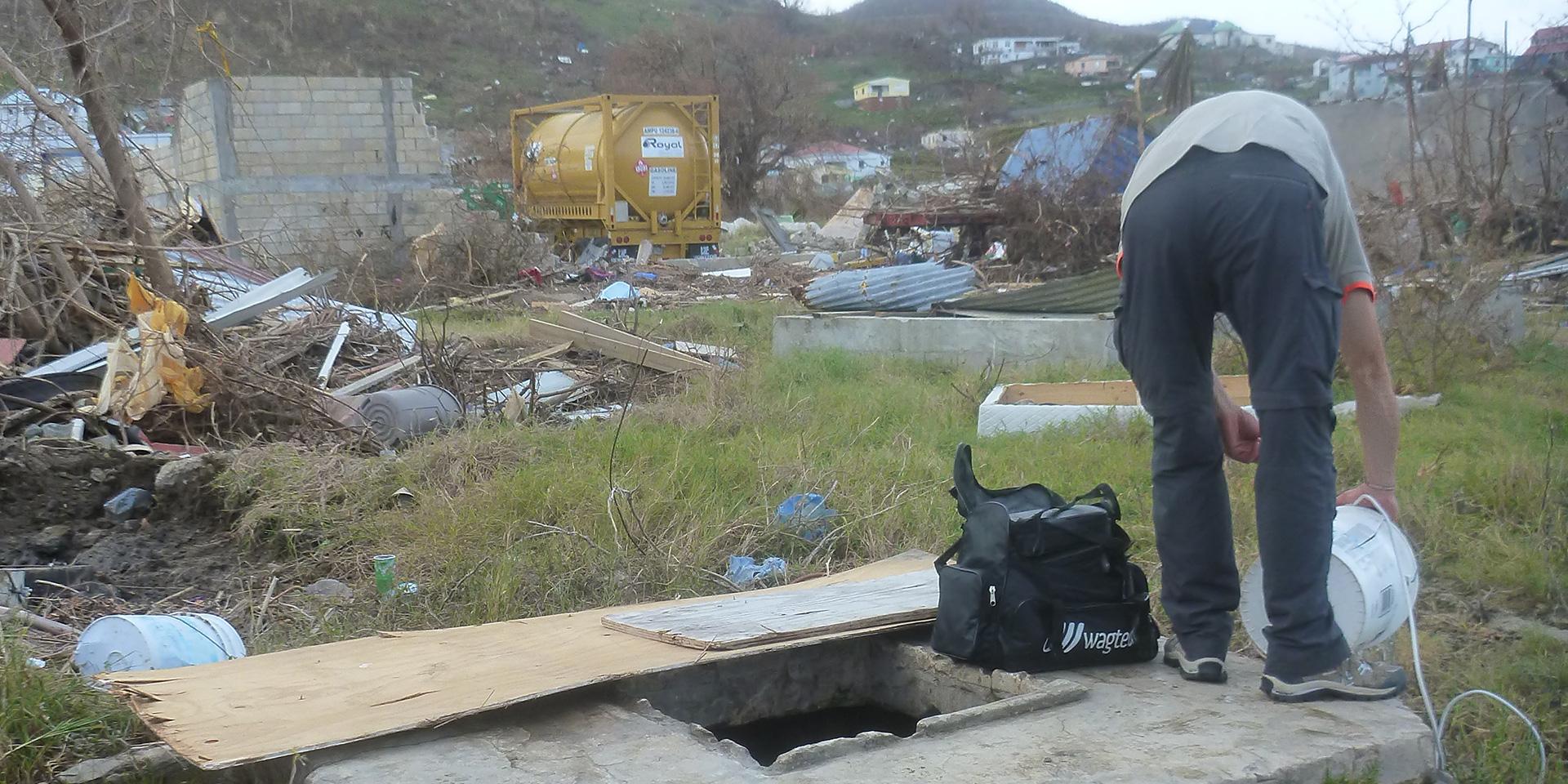 A historic well in the centre of Marigot on Saint-Martin island, 14 September. 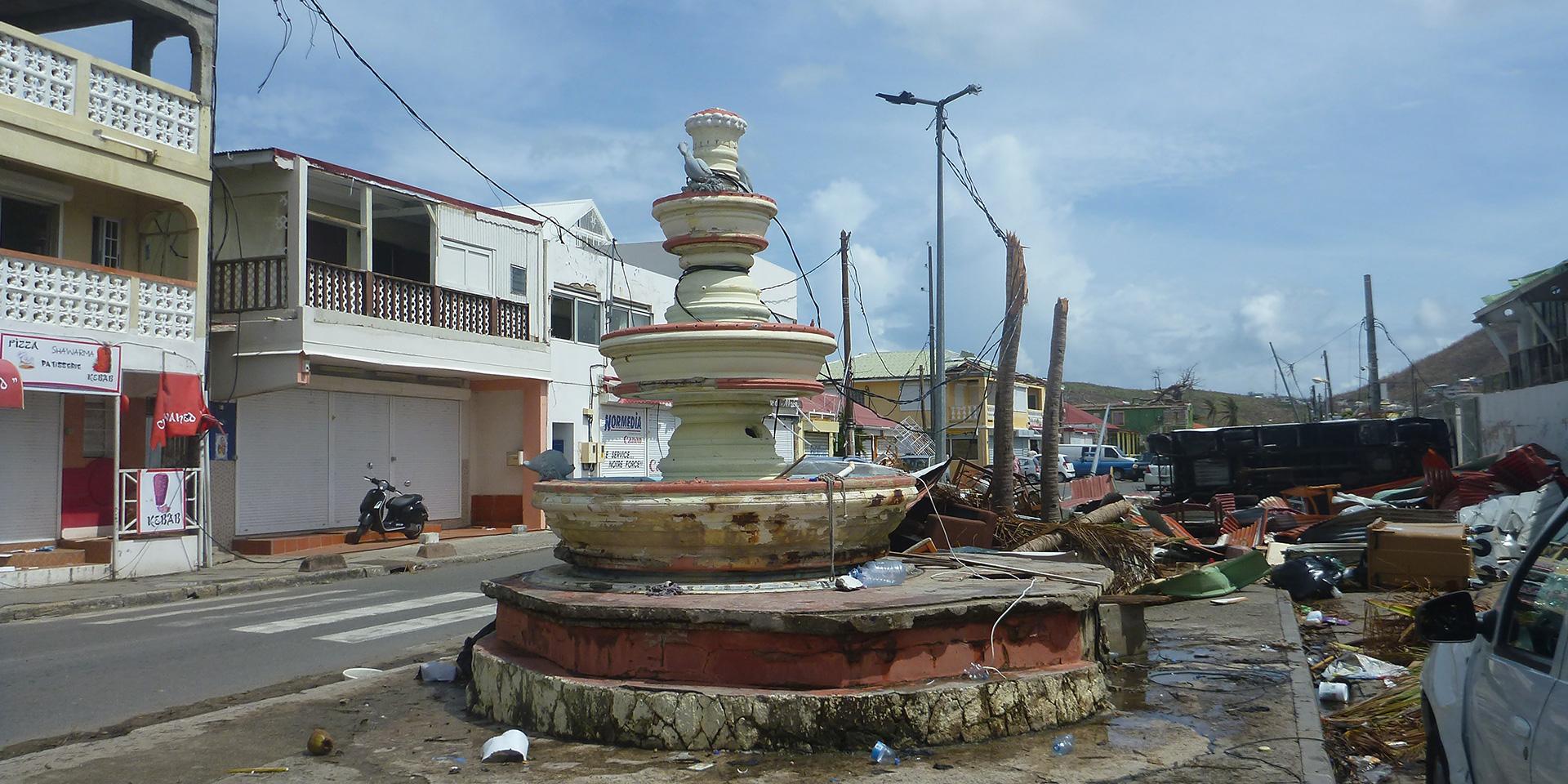 On 5 September, the BRGM activated an internal emergency expertise unit to ensure the continuing presence of its operational modelling team and support to the local teams remaining on the spot to respond to requests from the prefectures. The aim was to coordinate the production of information and respond to requests at the national level from the operational inter-ministerial crisis management centre (COGIC) and the inter-ministerial crisis unit (CIC).

As well as direct support to the local authorities, 12 status reports on the progress of Irma and subsequently José were sent to the COGIC from 5 to 9 September and relayed whenever necessary to the Caribbean area and the French Caribbean prefectures by the BRGM's regional divisions. These status reports included estimated storm surge and storm tide figures and indications of the zones most likely to be exposed to coastal flooding. Hypotheses on how the situation would evolve were also provided.

A ground reconnaissance campaign was conducted on 7 September to diagnose coastal impacts in Guadeloupe. On a request from the Prefecture, the BRGM also participated in a reconnaissance mission to Saint-Barthélemy, which established that no significant land movements or flooding had occurred, but that marine impacts on the coast were severe.

On Saint-Martin, the BRGM provided the Red Cross, on behalf of the island's water and sanitation agency, with the location and characteristics of known wells and water supply boreholes to assess their potential for supplying clean water. This required a mission on the spot from 13 to 15 September.

The hurricane season is far from over and post-Irma crisis management is still ongoing in the Caribbean with the approach of Storm Maria in the Lesser Antilles.

The BRGM therefore remains on stand-by to meet requests from the public authorities as they arise. As soon as conditions permit, a ground survey will be organised in the Nord islands to draw up an inventory of marine impacts that resulted in damage, erosion and flooding.