Share
The major occurrences of rising water levels of the early 2000s prompted a growing awareness of the need to better prepare for dealing with this natural phenomenon. BRGM has been heavily involved in understanding high water mechanisms, demonstrating the sometimes-essential role of groundwater and creating forecasting tools that are now reliable.

For a long time it was thought that rising water levels were primarily the result of surface phenomena: heavy rainfall and run-off that makes rivers "swell".

It was not until the overflowing of the Somme in 2001 that the essential role of the subsurface and groundwater in triggering rising water levels and floods was recognised. Rising water levels are in fact the result of several components concerning both surface water and groundwater: run-off from slopes, inflow from rivers further upstream, run-off from aquifers under neighbouring slopes and plateaus, saturation of the alluvial groundwater table, porosity and surface condition of the ground when it rains and the relative capacity of rivers to evacuate this water.

It is therefore necessary to identify and understand the different mechanisms that converge in a rising water episode, none of which is similar to another, whether in the causes of its onset or in its course. While it is difficult to anticipate rainfall, it is easier to predict the behaviour of groundwater, whose reactions are much slower. Thus, with the help of simulation tools, it is possible to accurately predict the evolution of an aquifer from between 3 to 30 days in advance, or even more, which is not the case for surface water.

This is the focus of BRGM's work and know-how on this issue since 2001 with the aim of understanding rising water mechanisms and implementing appropriate forecasting tools. 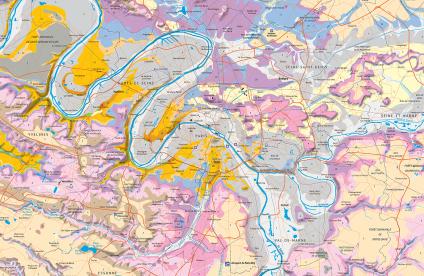