Airborne geophysics is a non-invasive imaging technology that provides 2D and 3D representations of the ground and subsurface. It provides a homogeneous image, even in hard-to-reach areas.

Over the past decade and more, BRGM has become expert in the acquisition and processing of geophysical data (electromagnetic, magnetic and gamma-spectrometry data) using airborne instruments.

Airborne geophysics allows the simultaneous implementation of several techniques for acquiring geophysical data quickly, including in areas that are difficult to access (forests, mountains) or which are devoted to a widespread economic activity, except in densely urbanised areas.

Measurements are made with geophysical instruments, usually carried on an aircraft or suspended under a helicopter. After processing and modelling/inversion, they yield a homogeneous, continuous and geolocated (with GPS precision) image of the geological subsurface environment, in 2D and 3D.

A tool for the French Geological Reference Repository

Airborne geophysics is an essential tool in the French Geological Reference Repository (RGF), a programme led by BRGM to provide France with three-dimensional knowledge of the French subsurface.

It provides useful information for the rational management of resources and the planning of underground space.

Airborne geophysics is a valuable decision-making tool for raw material prospecting, risk management and spatial planning, the assessment and management of groundwater resources or for underground energy extraction.

Coverage of the national territory, region by region

Since the end of the 1990s, BRGM has undertaken repeated airborne geophysical data acquisition campaigns, with the aim of providing complete coverage of the territory, region by region.

Numerous airborne geophysical surveys have been carried out in France since the late 1960s. Since the end of the 1990s, BRGM has undertaken repeated airborne geophysical data acquisition campaigns, with the aim of providing complete coverage of the territory, region by region.

Until the 1980s, numerous surveys were carried out in France, by targeting restricted areas, mainly for mining purposes, but also for oil prospecting. Due to their age, the data from these surveys are generally only available on paper and must be requested from the companies that acquired them.

Data concerning old airborne geophysical surveys (up to the 1980s) are available via the BRGM Infoterre portal, by loading the "Geophysics/Aeromagnetic campaigns" data layer. This database provides access to the following information in particular:

Surveys undertaken since the 1990s

Below you will find the main information on the surveys carried out since the late 1990s.

In order to gain a better understanding of the subsurface and gather data that can be used by various regional stakeholders, BRGM is launching a heliborne geophysical survey of the famous "Chaîne des Puys" mountain range. The project is co-financed by BRGM and the European Union, via ERDF funds managed by the Auvergne region.

BRGM, on behalf of CNRT, in a scientific consortium with the University of Aarhus (Denmark) and UNC, conducted a helicopter-borne geophysical survey of targeted areas of New Caledonia's Grande Terre in May 2015. This acquisition, carried out as part of the Ophiostruct project, dedicated to the study of ophiolite structuring, to better understand lateritic nickel deposits, was co-financed by the CNRT. Taking advantage of the survey, the SGNC financed a geological survey flight over the Boulouparis area and the CGE-VKP financed another over the Koné area for hydrogeological purposes.

BRGM, in partnership with the EU (under the ERDF), the French Government and the regional authority of La Réunion, conducted a helicopter-borne geophysical survey of the entire island, lasting from April to July 2014, in order to map its geological resources.

BRGM, in partnership with the EU (under the ERDF), the regional authority of La Réunion and the Guadeloupe Water Office, conducted a helicopter-borne geophysical survey of the entire island, in the spring of 2013, in order to map its geological resources.

BRGM, in partnership with the EU (under the ERDF), the DEAL, the regional authority of Martinique and the Martinique Water Office, conducted a helicopter-borne geophysical survey of the entire island, in the spring of 2013, in order to map its geological resources.

How can 3D geological mapping be done for volcanic islands with rugged terrain? With the helicopter-borne geophysical campaign carried out in 2011 in Mayotte, BRGM now has the first geological map of the island at a scale of 1:25,000 and a model of the subsurface to a depth of 200 metres.

In autumn 2011, BRGM carried out an airborne geophysical survey over the southern 2/3 of the Burgundy region to improve knowledge of the region's subsurface. This campaign was co-financed by BRGM and the Carnot funds (action 2009-24).

During the winter of 2009-2010, BRGM carried out an airborne geophysical survey over an area extending to the junction between the Armorican Massif and the Centre region, the Seuil de Poitou and the northern part of the Aquitaine basin.

In 2008-2009, BRGM conducted an airborne geophysical survey in the Centre region (magnetism and spectral radiometry). Carried out within the framework of the ResoNat programme, as part of the State-Centre Region Project Contract (2007-2013), the main objective of this campaign was to contribute to the development and rational management of natural resources in the region. It was financed by the Centre Region and BRGM, and by the Carnot 2007-13 action for phase 2.

Within the framework of a research project financed by BRGM, EUFAR (European Fleet for Airborne Research) and the Carnot funds (action 2008-22), an airborne geophysical survey (magnetism, spectral radiometry and electromagnetism) was carried out in Languedoc-Roussillon in 2008. This campaign covered a pilot area of the coastal plain. Its main objective was to contribute to the protection of the region's water resources.

Airborne geophysics provides a 2D/3D image of the ground and subsurface. BRGM conducts regional data acquisition surveys. Here are the answers to some frequently asked questions on this topic.

What is the purpose of airborne geophysical surveys?

The airborne geophysical studies undertaken by BRGM and its partners help to modernise France’s geological infrastructure. The acquisition of this type of innovative data enables us to gain a deeper understanding of the subsurface in France and in its overseas territories. This is one of the missions of BRGM, the French Geological Survey.

Depending on the methods used, airborne geophysics provides information from the surface of the ground to several kilometres below the surface.

In addition to the other information available (geological, drilling, seismic and other  maps), airborne geophysics makes it possible to better describe and understand the subsurface, with applications in the fields of spatial planning, resources (water, materials), geological risks, geothermal energy and storage, and in general, of geological knowledge.

Have such studies ever been conducted in France?

Numerous airborne geophysical surveys have already been carried out in France, on behalf of various operators, since the end of the 1960s: until the 1980s they were mainly for mining purposes, then more recently for geo-environmental objectives.

A detailed description (metadata) of the surveys recorded by BRGM on French territory is available on the InfoTerre portal, by loading the "Geophysics/Aeromagnetic campaigns" data layer.

What do the measurements consist of?

There are many airborne geophysical techniques and each is adapted to provide information on one or more surface/subsurface parameters, with different resolutions and penetration depths.

The methods most commonly used by BRGM for imaging France’s subsurface are:

Why is airborne geophysics useful?

The main advantage of airborne surveys is that they can cover very large areas in a short period of time and thus replace long ground surveys. This type of acquisition can also cover the entire territory, with the exception of built-up areas (which cannot be flown over at low altitude) and certain restricted sites (nuclear power stations, strategic sites, etc.).

Permission to fly is systematically requested before any overflight.

Have you applied for the necessary permits?

Flights over any area under these conditions are subject to an application to the French airspace regulator, the DGAC, and also to the prefectures of the departments concerned. Overflights can only take place if an order has been issued by the two above-mentioned authorities. This order concerns an aircraft and its pilot only, for a specific period.

The companies involved in the acquisitions follow these orders to the letter.

Why do you have to fly so low?

To ensure good data acquisition, the optimum flight altitude is between 80 m and 120 m. This altitude is actually a trade-off between the requirements of the measurement technique used, which needs to be as close to the ground as possible, and safety and environmental considerations.

Will there be any financial compensation?

For surveys, the airspace is cleared and all necessary government authorisations for the implementation of this type of study are obtained prior to the overflights. In the unlikely event of an incident directly related to the study, rapid and thorough investigations will be carried out. The operating companies are fully insured for this type of work and will deal with any legitimate claims that may be made. 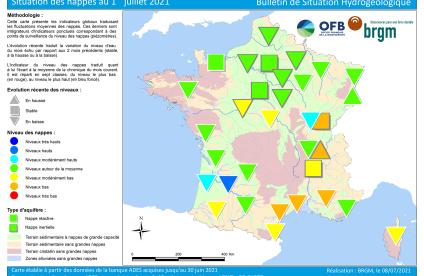 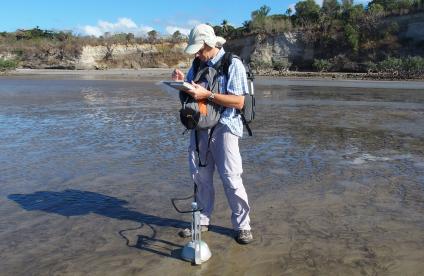 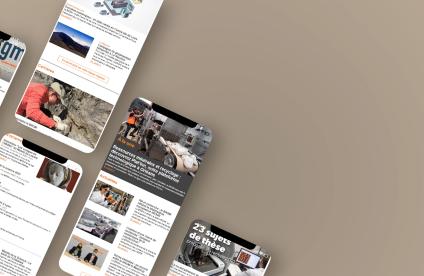 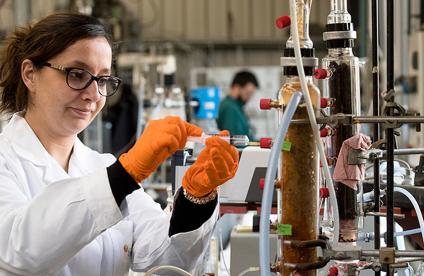 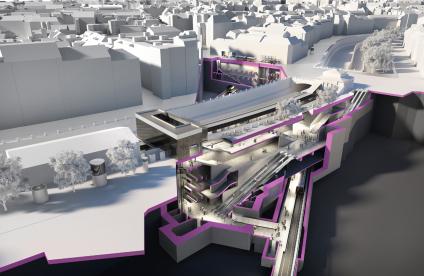 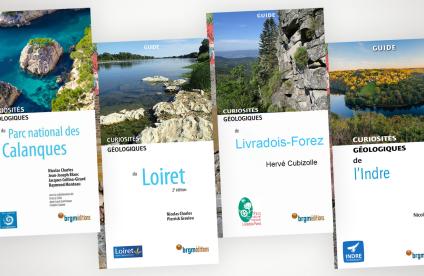 News
Editions du BRGM: 4 new geological guidebooks to discover before the summer
All the news
Newsletter