From 2 to 12 October 2020, BRGM, France's geological survey organisation, will be taking part in the 29th Fête de la Science, centred around a virtual programme aimed at the general public. 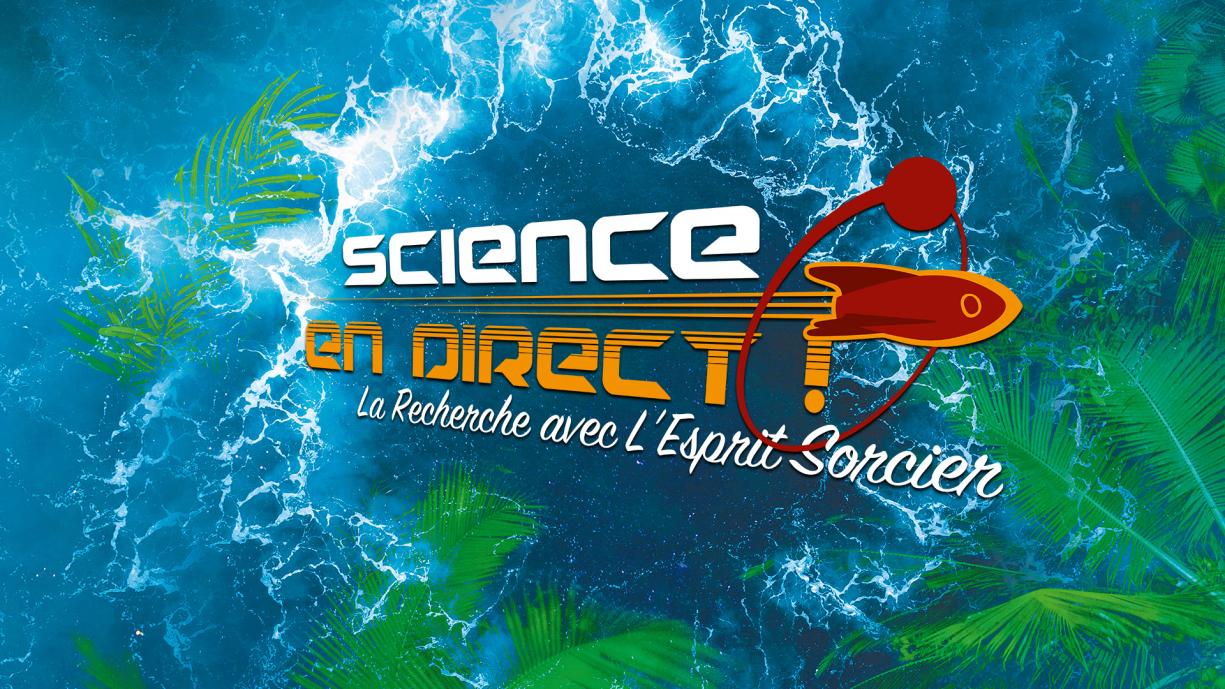 The Fête de la Science, France's festival of science organised each year on the initiative of the Ministry for Higher Education, Research and Innovation, is a nationwide event for sharing scientific work with the public. It is an opportunity for everyone to find out about scientists' work, technological developments and careers in research, and to talk to people who are involved in science on a daily basis.

BRGM, France's geological survey, will be taking part in the 29th edition of the festival from 2 to 12 October 2020.

Because of the COVID-19 pandemic, the Fête de la Science has been transformed, with its central component for the very first time being a virtual programme specially designed for the general public.

For its 29th edition, the Fête de la Science is inviting itself into your home, with a daily live show called Science en Direct ("Live Science"), which will feature researchers from leading French research institutions and organisations who will be talking about their work.

For the very first time, this interactive 90-minute webcast for all the family will introduce you to the most exciting research carried out by French teams around the world as they strive to understand, innovate and protect our planet.

Hosted by Fred Courant and the journalists from L'Esprit Sorcier, this programme offers a real Tour de France of research – both in metropolitan France and the overseas territories – with many live link-ups from laboratories and exotic field locations. Oceans, forests, the animal world, health, space... each show will explore a new domain from which scientists draw inspiration and seek to serve "Planet Nature".

Its interactive format will allow the audience to participate live with our guests and ask them questions. The show will also showcase the many events being organised in every region for the festival of science. These ten webcasts, designed to make science accessible to as many people as possible, stimulate their curiosity and provide inspiration for future careers, promise to be full of surprises and excitement.

Science en Direct will be on every day from 5:30 pm to 7 pm, from 2 to 11 October. The programme will be streamed live on the event website www.fetedelascience.fr and the www.lespritsorcier.org platform, as well as on the sites of partner institutions and research organisations: ANR, BRGM, CEA, CNES, CNRS, IFPEN, Ifremer, IGN, INED, INRAE, INRIA, Inserm, IRD and IRSN, with the support of CASDEN, EDF and the city of Paris.

Gonéri Le Cozannet, an engineer by training with a PhD in geography, has been working at BRGM since 2006, in the "Coastal risks and climate change" unit of the Risks and Prevention Division. His research focuses on the effects of sea-level rise on coastal erosion and flooding. He is currently coordinating the INSeaPTION research project to develop climate services for adapting to rising sea levels. He is the author or co-author of some 30 public reports and around 50 publications in peer-reviewed journals, and is currently contributing to the Sixth Assessment Report of the Intergovernmental Panel on Climate Change (IPCC) on impacts, adaptation and vulnerability to climate change in Europe and the Mediterranean, due to be published in 2021.

Welcome to this first encounter which will plunge us into an ocean which keeps rising all across the world, by submerging islands, coasts, and even our shores. Added to that, sadly, as we have seen, are increasingly violent storms and cyclones. All due, of course, to anthropogenic global warming. Which means caused by human activity. I'm delighted to introduce Gonéri Le Cozannet.

You're with the BRGM: the Geological & Mining Research Bureau. You're a researcher in the Risk & Prevention Department. Is that right?

Let's dive right in. You agree, no doubt about it, the oceans are rising?

No doubt, the oceans are rising. They have risen 15 to 20 cm since the mid-19th century. You brought along a diagram for us to see.

Exactly. It shows observations between 1870 and 2000. The 15 to 20 cm I mentioned. And the predictions of two scenarios. In the first, we severely cut greenhouse-gas emissions.

In the second, we do nothing.

And that would be totally catastrophic. The oceans are rising, and there's often talk of 2100. As if they'll stop rising in 2100 if we do nothing!

We know they're rising, and we know why. Due to the thermal expansion of the oceans, the melting glaciers...

Whoa there! We understand the melting glaciers, but you used a long term before that.

I'm sorry. The thermal expansion of the oceans.

The oceans are heating up and dilating. That explains half of what we saw in the 20th century.

The oceans are rising because temperatures are higher. The ocean surface is notably much warmer and so it's swelling. Like when you boil water.

Climate change is an energy imbalance in the earth's system. 93% of additional warmth due to climate change goes into the oceans, which absorb it and swell.

OK, but if we look way back into the past... You brought another diagram on this. We know the oceans have risen, because a long time ago, they were very low. Then things stabilized, before starting to rise again.

21,000 years ago, there was an ice age. There were four major ice sheets. One over Scandinavia, one over Canada, one over Greenland, and one over Antarctica. These ice sheets melted, and 6,000 years ago, the ocean level reached its current height. The ice sheets were 120 metres thick, so you could walk from France to England! Or 200 km from Nantes before you saw the sea! Currently, we're in a fairly warm interglacial period. Since 1870, after being stable for 6,000 years, the ocean level has been rising due to climate change linked to the greenhouse effect.

Clearly due to emissions of greenhouse gases.

Something that allows us...

To observe easily and reconstruct this imbalance.

Absolutely. So it's fact. To sum up, we have the dilatation of water, melting glaciers, along with the melting of the poles... Added to that, sadly, as we've seen in recent years, depressions bringing monster storms which in turn bring more and more water to our shores.

Two things make us think there are more storms. Firstly, we see them more easily, because there are more assets along the coasts. We know there are more storms because there's more damage. The second thing is the rising sea level, which has caused an increase in extreme episodes. Added to storm cycles, which haven't changed much in 100 years, is the rising sea level. We characterize storms by their return periods, like centennial storms which occur every 100 years, decennial storms, every 10 years... There's generally only a 40-cm difference between them.

At the BRGM, you model these storms to see how far inland they go. We have a very interesting animation to watch.

We all recall 2010 and Cyclone Xynthia, and the ensuing disaster. But this is an animation of Storm Johanna. It was in March 2008. It submerged the Gâvres Peninsula in the Morbihan in Brittany.

That's right. Here you can see the incoming tide. The tide is oncoming, the storm is causing a fall in atmospheric pressure, the sea level is rising, and the wind is forcing water sideways.

Yes. We modelled each wave and we see a complex flooding process.

It's not a static water level going over the defences. Each wave is going over them. So for the overall model, we had to model each wave. And there, very quickly, the peninsula is flooded. Evidence of this remains with water-level marks on the walls. There were no victims, but lots of damage. So the traces on the walls validate our model. It allows us to formulate coastal risk-prevention plans so we can reduce the risks across the area.

That's the aim of the work in your department at BRGM: to establish prevention plans. We just saw, very clearly, how France's coasts can be suddenly assailed by the ocean and be totally flooded. What are the most vulnerable areas along the coasts of mainland France?

It's the very low coastal areas that are floodable. Along with erodible areas. For example, in Aquitaine, some sandy beaches are eroding by 1 metre a year. If there are homes and businesses behind the beach, we're gradually reaching a situation where we either move the buildings or protect them with breakwaters or riprap, for example. Other low coastal areas in France are Languedoc-Roussillon, Poitou-Charentes... All over, really.

More than we imagine.

All along the coasts, not only in big regions, but well identified, are flood-risk zones. They're in Brittany, everywhere.

The Camargue is often mentioned, but there's Aquitaine, Brittany, Charente...

So global warming and the rising ocean level are of great concern to us. A final word on French overseas territories. Notably Guadeloupe, which is a very fragile zone.

The problem with Guadeloupe is a low area called Jarry, where 40,000 people work every day.

Exactly. It's a crucial area for Guadeloupe's economy, and it's only 40 cm above sea level. So imagine if the ocean were to rise 40 cm. Well, this is expected to happen by the second half of the 21st century.

So there will be problems.

Big problems. Problems, too, for French Polynesia, and the Tuamotu Islands. So the harsh realities are being placed in front of our eyes through your studies.

We're at a moment where the sea level is starting to accelerate. The question is: how fast? Today, it's 3 mm a year. 1 cm a year is possible during the 21st century. It depends on our greenhouse gas emissions. Thank you, Gonéri.